Spoilers ahead so don’t read unless you’re caught up…

How’s everyone doing? Have we recovered? Do we feel comfortable enough to discuss what exactly happened Sunday night? Has enough time gone by or are the wounds still too fresh? I really wanted to write this piece yesterday but we all know that Monday is Week In Geek day so I put it off, and honestly I’m glad I did. It gave me one more day to digest what happened. I’ve been discovering through my travels on the interwebs that people are kind of torn on this episode. There are some who think it was excellent and there are others who are just pissed about the ending. And I understand both arguments. I don’t necessarily agree with both arguments,  but I at least know where you’re coming from. Let’s talk it out and have ourselves a little bit of a therapy session and see if we can figure out just what the hell happened Sunday night. 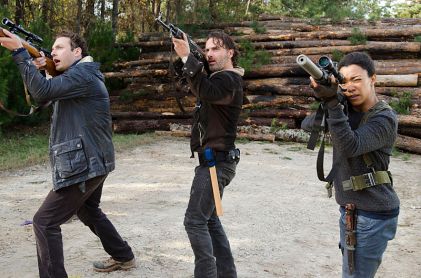 I’m going to start by saying I loved this episode. I want that out of the way early so you guys don’t have to do any guess work. I thought this season finale was exactly what it needed to be to make the entrance of Negan mean something. After the mishandling of the Governor the show needed to present Negan as the force he is, and with that they succeeded. With that being said I did feel that not disclosing who died is a cop out, and with a season that already had teased two possible deaths (one the week before) it just seemed like a tired trick at this late in the game. But when you think about it what is the purpose of TV? Besides entertainment one could argue that it’s to spur conversation, and in that regard the Walking Dead certainly did it’s job.

The six month wait to find out who Negan used for batting practice is going to suck, and already there are great things being posted all over the place covering all types of theories, but I think we might be missing the big picture here. The death of a beloved character certainly is the underlining topic but this episode wasn’t about that. “Last Day On Earth” isn’t a story about who dies in the end, it’s a story about the breaking of Rick. That’s it. It’s that simplistic. The end result is someone dying but the main story here is watching Rick Grimes get owned. Badly.

Think about it. When this episode starts off, Rick is in full gunslinger/cock of the walk mode, and he’s earned that right to a degree. Every problem this group of survivors has faced, Rick has overcome. Shane? He dead now. The Governor? Missing an eye and a life. Cannibals? They got messed up in a church. Alexandria? Done took that place over. So why wouldn’t Rick naturally assume that Negan and the Saviors would just be another pebble in the road to be kicked aside. The track record speaks for itself. 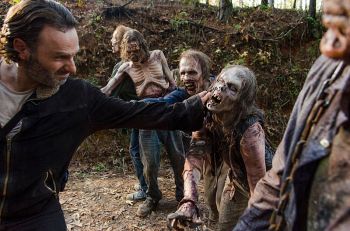 Now granted not all of Rick’s actions have been for the better and there certainly has been a learning curve. Yet at the end of the day Rick has guided has band of merry followers to a position where they can shape the world they live in. This season has seen Rick blur the lines between good and evil. I know those are simplistic ways of thinking about actions but when push comes to shove that’s what it is. Rick is neither a good man or a bad man, he’s a man who is willing to do anything to survive and protect his loved ones. That makes him a dangerous man, and his actions dictate how committed he is to doing that. Even if that means storming a base of people he knows nothing about and killing them in their sleep. Think of it this way. If Rick’s group was attacked in a similar manner wouldn’t we assume that the people attacking them are the villains? It’s some pretty dark stuff to attack people in the middle of the night without being provoked. From that perspective couldn’t we see how Negan is justified in believing that he’s the good guy in this scenario? He’s just standing up for his people and for his way of life. That’s the exact thing Rick and company has being doing since the start.

The best part of this episode was watching the progression of Rick’s cockiness. When they first meet the Saviors in the road, he throws out that Clint Eastwood type line to creepy mustache guy (not actual character name) asking him what if this was his last day on earth (ooooooh title alert), but that’s the kind of bravado we’ve come to expect from Rick. That whole “my D is bigger than your D, and I’m going to prove it” mentality is part of what has kept him alive for so long. As the episode went on and Negan and the Saviors continued to be one step ahead, it seemed like Rick’s D shrunk up a little. Each stop left him more and more rattled, and the chain gang of zombies wearing his friends clothes was the first time Rick seemed kind of confused and without a solution.

The underestimating of Negan was tremendous and all attributed to Rick’s hubris. By the time they try to move on foot it’s already too late, and I kind of think Rick knew it. Eugene has a great character moment in driving off alone but it’s the wrong move. There. Is. No. Where. For. Them. To. Go. And Rick has to know that. There is no way he even remotely believed that going on foot would result in success. Pride and arrogance make him believe of course they can sneak through the woods at night and get around this group that has been a head of them the entire time! So when the creepy whistle fest starts up it’s not unexpected. Now granted Rick didn’t have another move to make, unless you count giving yourself up and taking your lumps, but he can’t admit that to himself or to the others. As soon as they start moving through the woods you’re looking at a Rick who knows he just got owned.

Then enter Negan. Yes Negan’s end game was to punish Rick for his actions. That punishment results in the death of a character. It’s tragic, violent, and awful. There’s no way to get around that. But that’s not what this was all about. Everything that happens in this episode is orchestrated to show Rick that he is not the top dog he thinks he is. As a matter of fact you can almost hear Rick’s ego shatter when those lights go on and he notices the game is up. He has lost and there is nothing he can do about it. That in part is what makes this scene so chilling (besides Negan killing it with that speech and the atmosphere of the whole thing). Did you guys notice how quiet Rick is? Every time the camera pans on his face he has that glossed over look that he can’t believe this is happening. Even as things are being mapped out by Negan it seems that all the fight has been sucked out of him. “Sucks don’t it? The moment you realize you don’t know shit.”

The only time that Rick says anything is when Negan figures out that Carl is his son. And even then all he says is “stop this”. The Rick we have come to know would have rushed at Negan starting a fight, and maybe the logical thinking for Rick is if he moves he’s dead, and he’s probably right. But the reality of the situation is he’s asking Negan to stop prolonging his victory because he can’t handle the loss. Rick can’t grasp the fact that he messed up, and he messed up big. The “stop this” isn’t Rick asking Negan to stop talking about Carl, it’s about asking Negan to stop gloating because Rick mentally can not withstand it. He is crushed and defeated and lost at sea.

So when we discuss this finale the major discussion points will be who did Negan kill. It’s a cliffhanger so it makes sense that’s what people talk about. But don’t let that cliffhanger hide from you what this episode was truly about. This was about the breaking of Rick, and that should be the main focus here. Not who died, cause we’ll find that out in six months, but the question of if Rick can recover from this will take longer to find out. Someone close to him dies because of his arrogance and his actions. Negan was a million steps ahead of him the entire time. Rick has been owned and put in his place like never before. The fight is clearly out of him. So when next season starts up we’ll find out who Negan killed, answering that question. But the bigger question should be, can Rick bounce back or have we seen the last of Rick Grimes as we know him? And that’s what makes this episode so fantastic. Taking a character who has been on top since the get go and bringing him back down a million pegs. In a lot of ways this finale tore the foundation of the show to shreds and next season will be a new start for a lot of these characters. A new start that is ushered in with the blood of their own and the loss of their leader. 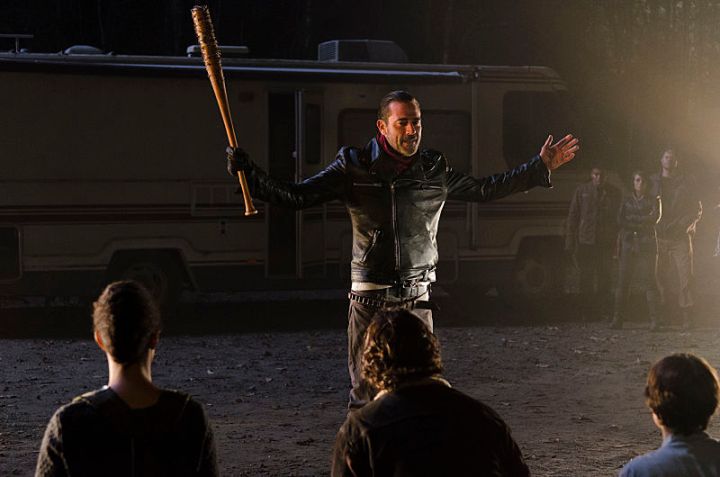 4 thoughts on “Time To Talk About That Walking Dead Finale”