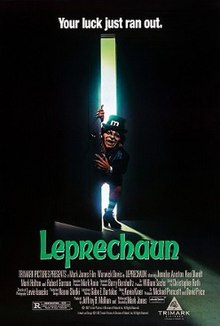 Ok, so I know I don’t usually like to do horror films that are PURPOSEFULLY campy, but what would a Guilty Pleasures column be without talking about the famed and terrible Leprechaun.

Whether or not director writer Mark Jones intended for the first Leprechaun to be terrible or not is up for debate, but one thing is clear: it is a TOTAL #GuiltyPleasure, as is evident from its multiple very successful sequels, most notably Leprechaun in the Hood from 2000, where our evil lead SMOKES A TON OF WEED. NOT MAKING THIS UP.

Like you’re gonna look at this picture and NOT google this movie.

While it’s sequels are varied and splendid (the fourth film takes place in space-take that as you will) the first Leprechaun is the one that started it all. It also started Jennifer Aniston’s acting career:

Pre-nose job Jennifer Aniston, that is. I’m not judging that, though: you do you girl.

So the plot is exactly what you think it is: the leprechaun just wants his fucking gold back. Just give him his gold, guys. It’s all he wants.

BUT NO. PEOPLE ARE SELFISH. So he kills a guy with a pogo stick.

And cracks another guys neck:

What can kill the evil Leprechaun? A four leaf clover, of course! And then his face burns off:

WHERE’S HIS GOLD GUYS? IT’S ALL HE WANTED. This is really just the story a little guy who just wants his property back.

But don’t worry: he comes back: in all 5 sequels. Leprechaun knows it’s bad, so it doesn’t have that special sparkle of true guilty pleasures, but it’s got the ammo for a million hysterical (if very very guilty) movies.