Geeklings, I have spent a large part of my vacation catching up on comic books. Well at least in the morning. Outside of today that is. Today was New Comic Book Day which means I read a shit ton of comics all day. It was… well… glorious

See how long it takes to get this gem out of your head. I was at NXT Brooklyn in August and I still can’t shake the thing. You’re welcome.

Like I was saying though I’ve spent a good part of this vacation catching up on comic books. You see here’s my problem with comics, besides the fact that I buy entirely way too many of them. Comixology just makes it so damn easy. But outside of the books I’m super excited about (the need to read now books if you will) I sometimes let my books back up. Yes, it often leads to binge reading which can be a lot of fun but it also means that I have to stay away from certain reviews because of potential spoilers. That can get annoying but I sort of enjoy just diving into a pile of books.

When I was buying physical books I had this same problem but it became overwhelming as it meant I had a literal pile of comic books that needed to be sorted through and read. At least on my Fancy Comic Book Reader (ipad) they’re physically not taking up space. But when I was reading the actual books it was problematic and actually lead to a couple of periods of stop and go reading. The nearest comic shop was an hour away and I’d only go there once a month. If I was lucky. This would result in me literally spending $60 on books and boards and only reading the ones I was super excited about. The habit became too expensive so I gave it up for awhile.

When I moved in with my sister I was committing to all different types of escapism (you’ll remember that Breaking Bad and Community really helped preserve some sanity for me), and I found myself wanting to get into comic books again. A feeling that was expedited by watching the Amazing Spider-Man. It bummed me out that I couldn’t just go home and read a stack of Spider-Man books. The problem was the nearest comic book shop was now even further away, and the digital aspect was really just getting started. So I did what any person with a need for comics would do. I joined a subscription site that would mail the books to me every couple of weeks (I see you Heavy Ink) and I subscribed to three series. That was it. Keep it minimal and under control. I could read the interwebs to catch up on any other books if I really needed to. And it worked beautifully for awhile. A couple of times a month I’d get my copies of Spider-Man, Batman, and All New X-Men and just like that I was back in the game.

When the digital thing took off it was not only easier for me to read books but cheaper. No shipping and handling or waiting. I could subscribe and download books through Comixology when they were released. It was incredible! I originally had a Kindle Fire to try it out and ended up filling the memory with books. My Fancy Comic Book Reader is much better with memory and has been just as awesome.The problem is with books so accessible it’s hard not to splurge and buy stuff. Especially when Amazon and Comixology have so many fantastic sales. Ugh. I’m like a kid in a candy store. I’ve branched out from just three series (I think I’m up to eleven at this point…maybe twelve?) and now read what I want because I can. My wallet hates me for this.

Now what’s the point of all this? I’m not sure honestly. I love reading comic books and with NYC Comic Con Friday and this weeks binge reading I’ve been really excited about them. Which means I wanted to share what I’m reading currently and maybe suggest some things for you my Geeklings. A small list of books that you should look into because (a) they’re awesome and (b) maybe we can have comic book conversations (AHHHHHHHHH could you imagine?!?). Plus who doesn’t love lists? Everyone loves lists. So here’s mine. A list of my favorite books right now at this very moment.

1. The Vision– I wasn’t sure what to make of this series until I started reading it, but I can assure you that it’s absolutely incredible. It easily makes my all time favorite series list (yes, that good) and there’s still one issue left. Tom King (who also writes Batman) has crafted a story that is eerie, heartbreaking, philosophical, haunting, and engaging. The Vision and his family are compelling characters and the questions raised here about what it means to be “normal” and fitting into society or what society perceives you as, have lasting effect. If there is one book you should be reading it’s this. It’s art. It’s beautiful. It’s everything a comic should be.

2. Ms. Marvel– This book has everything you’d want from a super hero coming of age story. Not only does the new Ms. Marvel capture all those fantastic Peter Parker vibes but also gives us a female hero who is worth looking up to. Don’t get me wrong there are plenty of them but Kamala Khan is aimed to be a role model for young girls and she’s not dropping the ball. It’s wonderful to see a female super hero who isn’t overly sexualized and can stand for something other then looking good in tights. This book tackles all types of subjects like religion (Kamala is Muslim), family, friendship, loyalty, living your dream, and finding yourself. Since this series we’ve grown with Kamala (especially recently) and it’s exciting seeing a character expand and grow up. Ms. Marvel is the super hero we deserve. 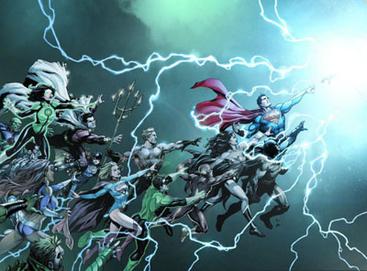 3. DC Rebirth- Flash and Green Arrow– The DC Rebirth story line has been a tremendous non re-boot re-boot to the DC universe. For me especially considering up until this event I was only reading Batman and Injustice from DC. I spent the early half of this week binge reading Green Arrow and Flash and both books have been excellent reads mixed with fantastic art work. If you’re looking for a jumping on point for these characters look no further.

4. Saga– How does one sell this book. It’s an epic that takes place out in outer space with a Romeo and Juliet type story. Two different species who aren’t supposed to fall in love do and even have a child together. Thus making them galactic fugitives. What follows is a story about race, family, love, loyalty, parenting, marriage, and war. Some parts feel like Star Wars and other parts feel like Game of Thrones but it all feels excellent. Brian K Vaughn is one of my favorite comic book writers (see Y the Last Man for further proof) and has crafted something here that feels special. Plus the book has one tons of awards and Fiona Staples art is tremendous.

5. Honorable Mentions- Jessica Jones & Champions– Both of these books came out today actually, and both of them were incredible. Starting with Jessica Jones which easily matches the tone of the Netflix series and feels like something different in the Marvel U. There’s a grittiness and looming mystery and I’m all about watching it unwind. As for Champions, well, it includes a number of my favorite heroes (including Ms. Marvel and Miles Morales’s Spider-Man). This is the Avengers book you want and it’s not even an Avengers book. These young heroes are going to be the face of the Marvel U for a long time and it seems that the company is putting a lot of stock into them. A group of heroes that just want to be heroes and do good. They’re young and they’re all special. The writing is crisp but the art needs improvement.

There you have it Geeklings. I’m reading tons of series but these are the ones that are standing out to me right now. Maybe at some point I’ll write a column where I talk about my favorite series of all time. Ooooooh that would be fun. As for now these are my favorite monthly books and if you’re a comic reader or looking to become one then these are some excellent places to start. I’ll warn you though, it’s an expensive/addicting habit, but it’s super fun. See what I did there? Super. Happy reading guys!

If you guys want to talk comics, or anything geeky really, you can find me on Twitter and Instagram @iamgeek32 Feel free to drop me a line. I don’t tweet too often but we can change that.