I was driving to work today and passed a car with what seemed to be the world’s happiest dog with it’s head out the window. Immediately I was stricken by two thoughts. Thought one is the same thought I have whenever I see a dog with his head out the window, and that’s the old segment from Saturday Night Live, you know, the Deep Thoughts with Jack Handey. He had this one with a dog… well just watch it below (so happy I found this)

I remember watching this segment with my cousin Savvas when we were kids, and I thought it was the funniest freakin’ thing I’d ever seen. As a matter of fact, watching it again just now, I still can’t help but laugh at that. It’s so delightfully deranged. Okay, fine. I’ve watched it twice. I’m a sucker for a cheap laugh.

So that was thought one. Thought two was a bit different. As I was looking at this super happy dog I thought to myself, “man, that dog looks a lot like Gmork from the Never Ending Story“. And it was that little two second drive by that lead to this entire column. Cause I started thinking about the Never Ending Story and what a effed up kids movie that is. Then I started thinking about Gmork in that cave talking about the Nothing, and I remembered just how much that scene scared me as a kid. And if I’m being honest, it probably still scares me as an adult.

Seriously, that scene is in a kids movie. Now granted it’s a kids movie that includes a horse drowning in a place called the Swamp of Sadness (are you effing kidding me?!), creepy naked sphinx like creatures that shoot lasers if you answer riddles wrong (I think there were lasers), a group of weird looking creatures who all die because a giant made of stone couldn’t hold on to them (“these hands”), and some super incredible fourth wall breaking. But this scene has always stuck with me (outside of the “these hands” soliloquy from stone hands).

As it kid it was the evil nature of Gmork as he lurked in the shadows talking about the Nothing. This wolf (?) just looked creepy. His talk was deliberate and heavy, and you just know that he had full intentions of eating our main character. Plus look at the way his lips move and the fact that there’s blood on his chin or cuts or something… yeah this thing scared the bejesus out of me. I haven’t even mentioned those eyes and their evil ass glow. Why would anyone think that this was appropriate for children?

Alright everyone I want to make a movie based on the book The Never Ending Story. I want it to include a horse that drowns because it gets sad. Yeah that’s right. I want to introduce a bunch of bizarre lovable creatures and then I want a monster made of stone to tell our main character they all died. Get this though. They died because he wasn’t strong enough to protect them. A stone man who wasn’t strong enough. Right?! Now mix in the fact that our main character is going to be hunted the entire movie by a giant fucking wolf that’s going to tell him that something called the Nothing is consuming the world. But I want this to be the most evil, diabolical, life ruining wolf puppet you’ve ever seen.

Wow I really like this idea. I never thought about making The Never Ending Story an R rated movie like that but the material certainly lends itself.

R rated?! Hell no! We’re going to make this for kids!  They’re gonna love it! Don’t worry there’s also this pink dragon like creature that looks like it’s made of fiberglass and glitter. They’ll be fine

Don’t get me wrong because I love The Never Ending Story and think it might be one of my all time favorite movies as a kid, but that’s because I love dark stories. I was recently talking to someone about the types of stories I gravitate to and they pointed out that a lot of them were rather dark. And that may be true but I find the darker stories to have more depth and be more interesting. Yeah it’s great to read/watch something happy and bright but that shit gets old after awhile. Give me something brooding and dark and I’m all for it. Not everything needs a happy ending. Plus the term happy ending is all relative any way.

With that being said though I’m not afraid to admit that The Never Ending Story also scared the hell out of me as a kid which is something I would try and hide from my parents so they would let me continue to watch it. Though at the time I think it was the visuals that scared me. As I’ve gotten older I understand the emotional cripplingness of the horse drowning in the Swamp of Sadness. The horse gets sad and it drowns. Sweet Jesus. And that speech about the Nothing? The very idea of the Nothing is terrifying in itself. This huge empty/bleak void that wants to throw the world into darkness? Yeah that sounds “cool” (heavy use of sarcasm). Now have that explanation come from a soul eating giant wolf puppet? Yeah I may never sleep again.

I think what I’m trying to say here is that fear kind of morphs as we get older. When I was a kid Gmork was the scariest part of that movie but now as an adult I find the Nothing to be one of the most horrifying ideas ever. Yet I can’t disassociate the two. Gmork is the Nothing and the Nothing is Gmork, and together they haunt my dreams. Or at the very least pop into my head when adorable smiling dogs drive by me. My mind is a weird place… 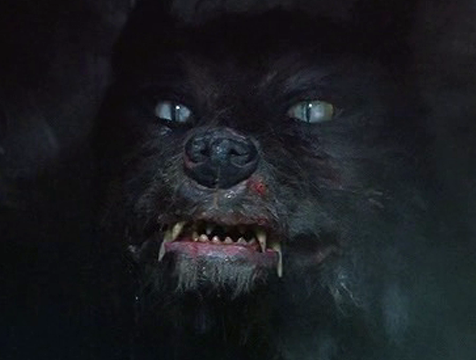