Geeklings, hello. I know it’s pretty late but I did not get the time I needed to write today but it’s Monday, and if I pride myself on anything here at I Am Geek it’s not missing a Week In Geek. But I’ll be honest I’m tired, I have a massive headache, and it looks like I have work tomorrow with a huge snow storm on the way. Joy. So if you’ll excuse me I’m just going to get right into it.

1. Iron Fist– It seems like forever ago that Luke Cage dropped on Netflix and finally it’s time to meet the last Defender. Iron Fist will be arriving this Friday, Happy St. Patrick’s Day (!), just in time for something to binge over the weekend. Iron Fist may not be getting the best reviews currently but that’s not going to stop us. A Marvel Netflix show is finally here and the Defenders is right around the corner. Allow us to rejoice.

2. Beauty and the Beast– That’s right, we’re not going to shy away from hyping a live action Disney film. Beauty and the Beast is the only animated movie to be nominated for a  Best Picture Oscar so the hype around a live action adaptation is real. The cast is legit and the imagery looks incredible. Well, I’m not overly pleased with the Beast he has a weird goat like look to him but otherwise let’s do this.

3. Breaking Bad the Movie? – I learned today that someone took all five seasons of Breaking Bad and cut it to a two hour movie. The amount of man hours spent cutting the series down to two hours boggles my mind but it has me curious. I watched the first two minutes (all I had time for today) but already the feel is different which I find fascinating. I’m curious to see how the rest of the “film” plays out. If you get snowed in tomorrow and need something to watch then there might be a worse way to spend two hours. I’ve included the movie below. Enjoy! 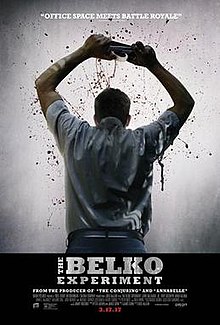 4. The Belko Experiment– For those of you who don’t know, James Gunn is more than just the writer/director of Guardians of the Galaxy. He’s been making excellent, weird films for awhile now (please see Slither and Super for further proof). While Gunn didn’t direct The Belko Experiment, he did write it. If the trailers are any indication then this thing is going to be crazy town banana pants. I’m picturing Office Space on crack. I’m always game for well written, zany horror movies. Here’s hoping The Belko Experiment doesn’t disappoint.

5. Deadpool 2– This should have made the list last week, but before the start of Logan there was a teaser trailer for Deadpool 2 and it was everything you wanted it to be. With Hugh Jackman bowing out of the X-Men franchise it looks like Ryan Reynolds will be taking on the shouldering of the films. If you’ve seen Deadpool and loved it as much as the rest of the world then this isn’t a bad thing. Zip it Stan Lee!

There you have it Geeklings. Sorry this wasn’t more but this headache is brutal. I’ll see everyone back here tomorrow. Hopefully I’ll be snowed in but I’m not so sure.