Geeklings, it seems like a long time since I last fell in love with a television show. I know what you’re all thinking, that’s not possible because I’m constantly here talking about the shows I love, but I assure you that’s different. How? Well, you see I’m already in an established relationship with the shows I talk about. I’ve fallen in love with them already and now use this space to speak about them. To celebrate them. But, as far as falling in love with a new show? It feels like it’s been awhile. You know that feeling. It starts by really enjoying the pilot and escalates to needing new episodes like yesterday. You’re telling all your friends about it in the hopes that one of them is watching it also so you can discuss. Great shows warrant discussion and there is nothing worse then watching something tremendous and having no one to talk to about it. That’s one of the circles of television hell.

My love affair with Legion started sort of slowly which is kind of strange considering how much I loved that pilot. Seriously, it’s one of the best first episodes I’ve seen in quite some time. I remember reading about Marvel doing an X-Men show with FX and I was curious, but I wasn’t counting down the days or anything. As a matter of fact, when Legion premiered I totally forgot it was on and missed setting my DVR. I noticed about a half hour into the episode and debated whether or not to set the DVR to record the encore presentation. It became a real Sophie’s choice. A part of me felt, “well, I missed that on to the next thing” while the more rational part of me said “shut up and record the episode”. As of late I haven’t had much luck with FX shows. I’ve recorded the first episodes of both Atlanta and Taboo and have yet to watch them. They currently sit collecting dust on my DVR. I was worried that Legion would be just another dust collector. Which doesn’t make any sense because it’s a comic book show and you all know how much I love my comic book shows. 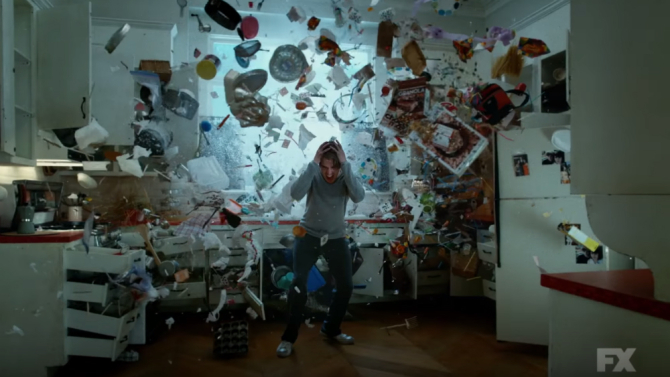 I think what sold me on Legion was the review I read on IGN.com. I usually go to them for most of my comic needs (books, shows, news) and I read the score they gave the show the next morning and it was pretty stellar. It’s important to read only the score. You want to know that the episode is good but you don’t want it spoiled either. IGN gave the episode a 9.5 out of 10 and it was then I felt the need to not let this show collect dust on my DVR. It was a day or two later that I sat down to watch it and found myself floored by the presentation. The pilot (or Chapter 1) was so ambitious and different then anything else currently on television. The visual presentation of this show is gorgeous. I mean, just incredible. In a lot of ways it’s artsy in the ways that Hannibal was or the way Mr. Robot is. Legion does for losing your mind what Hannibal did for food porn (yes, I know it’s people!). It uses color schemes similar to the way Breaking Bad did, and all while giving you a story and characters that are just as engaging as the background material. Legion is a show that’s trippy as hell and if you didn’t know that this was X-Men related then you would have no idea that this is a comic book show.

Essentially the show is about a young man, David who finds himself in a mental help facility. It’s clear that David has some problems #understatement. For starters he can hear voices (like all of them at once), can occasionally move things with his mind when he becomes emotionally unstable, and sees some kind of yellow eyed demon lurking in the shadows. David is a mess and that’s part of the draw. David is learning about himself just as the audience is which kind of keeps everyone on the same page. There are characters who think they know what David is but essentially no one has ever experienced anyone like him. You quickly learn that he’s not necisarrily crazy. Off? Oh, for sure. A mess? Most definitely. Crazy? I think he’s more a product of his power. That’s right, power. This is a comic book show after (some where deep inside).

Suddenly David finds himself desired by a number of different groups. The government who think he’s a threat and under ground resistance group that wants to teach him how to use his powers to help win the big war. And that Geeklings is the long and the short of it. I’m fully aware that I’m not doing the show justice but that’s what the show is about on it’s surface. As your start to watch though you learn it’s something more. This show delves deeply into the manifestation of powers and how they define ones self. For example there’s Syd, Davids girlfriend, whose ability is if she touches someone (skin to skin) then they switch bodies. Her consciousness goes into their body and vice versa. Which naturally leads to strained relationships on her part. How can you fall in love with someone if you can’t touch them? I’m not just talking intimately but simple things like holding hands? How can you trust someone else when you’re constantly afraid of them coming into contact with you? At what point do you start questioning yourself? That maybe this ability is some sort of punishment. The study between characters and their abilities is fascinating and part of the draw.

David becomes a study of paranoia and what’s real and what’s not. David’s whole existence is thrown into question because his whole life has been centered around thinking he was sick and not understanding his power. Or the fact that he has a power. David is a lost soul who is searching for something real or something to ground him, and this underground resistance group seems like they could lead to something brighter, but the darkness of David’s past clouds the ability to appreciate that. David strives for a better life but the demons of his past have him convinced that it’s not for him.

As is the acting. This cast is fantastic, particularly Dan Stevens (David) and Aubrey Plaza (Lenny). Stevens is the anchor of the show and all things seem to spin off him. Every character is drawn to him, as he’s more or less the center of this universe, and they all revolve and spin on David’s actions. Aubrey Plaza’s Lenny is a bit different because she seems to exist in more of a grey area. Without giving spoilers, Plaza relishes in the bizarreness of this landscape and gives such an animated and vivid performance. Her performance is just as bright or dark as the visuals presented.

As I was writing this it dawned upon me that the last show I fell in love with like this was Westworld and in a lot ways there are similarities between the two. Both these shows are looking to tell layered stories through engaging characters with an ever expanding mythology and mystery element. Legion is slow on giving answers but big on expanding it’s universe which is exciting and beyond engaging. The season is only eight episodes long and while I’m finding that I love shorter seasons (tighter story telling and less filler episodes) I could also use like three episodes more because I’m greedy.

I’m telling you though Geeklings, Legion needs to be on your radar. I was worried  that this show wouldn’t be able to maintain the very high bar the pilot set but week after week Legion tries to out do itself. And now five chapters in and this show is melting my face. Here’s hoping that it gets picked up for a second season and that it sticks the landing with the finale because I think we have something quietly special here.

5 thoughts on “Why You Need To Watch Legion”