Now fast foward to right now where I sat down in front of my keyboard. I wrote my most awesome title, inserted my most awesome picture, aaaaaaaaaannnnndddd… nothing. Not a damn thing. I wrote three sentences before the alarm in my head started blaring. Which for those curious sounds a lot like the alarm of the Nostromo when Ripley sets that thing to blow. “Mother you bitch” style up in this cranium. My brain was telling me “don’t do it. You’ve got something good here and if you force it you’re gonna lose the whole thing.” (*ahem* that’s what she said *ahem*)

This now begs the question, “where does that leave us today?”, and it’s a fair question indeed. The good news is I have not abandoned my idea, and will take the rest of the night and tomorrow thinking about how to translate my mind thoughts to your screen. The openings I kept coming up with were so flat, and I think a lot of this piece depends on the opening. As for today… I’ll leave you with this video as a teaser for tomorrow. Maybe you’ll get the idea where my mind is at, maybe you’ll just laugh at the clip, or maybe none of the above. Hopefully I’ll be able to clear things up tomorrow.

Before I say goodbye for the night I did want to leave you this text exchange between my sister, and I. As a geeky older brother it’s nice seeing these moments in my sister who has so much untapped geeky potential. Plus the question she asks is kind of awesome and worth sharing with you fellow Geeklings. The print is a little small in the image so allow me to ask it here. “You’ve been kidnapped. You can call on the characters from one television show to make a rescue attempt. Which show do you pick?” Leave your answer in the comments, either here or Faceyspace. Think it over and choose wisely. 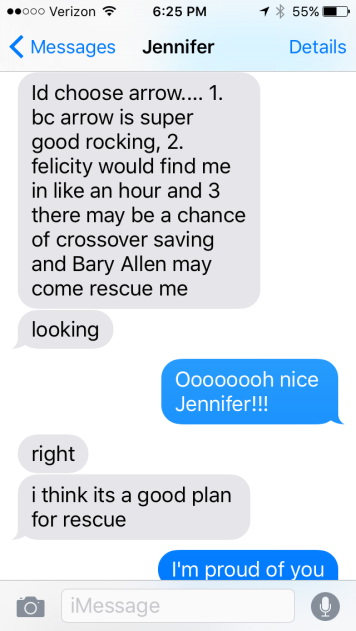