Hello fellow Geeklings! I have to say after yesterdays “riveting” post I am feeling quite refreshed. Or maybe I mean a little buzzed? Not sure. I decided to straight up waste my day today and start day drinking whilst finishing season six of Parks and Rec. After passing out at 11:30 on a Saturday only to wake up at three o’clock in the morning in my chair (for those of you keeping score three o’clock in the morning is the scariest time to ever wake up. Thanks horror movies), I felt that clearly I needed to a do over. Which brings us to right now four beers deep and with a free fried chicken meal sitting in my fridge for dinner. Free? Yes because I went to the local surf shack for some chicken fries earlier and they screwed up my order and let me keep the fried chicken…and gave me the chicken fries! Hashtag dreams do come true.

But that’s not what I’m here to talk to you guys about. I think the time has finally come for us to start talking about the Walking Dead. Now I’m going to give fair warning to those of you who watch the show (and the few of you who maybe read the comics. Any of you here? It can’t just be me. Is it?). This post is going to contain spoilers from past seasons of the show and I’m going to try real carefully to not spoil future events. Although I will allude and before I do I’ll put up a big S P O I L E R S notice so you can avoid it. I would hate to ruin the show for anyone. Unless you read the comics then you know what’s coming.

For starters I think, thus far, this has been one of the better seasons of the show. Around season four I was getting ready to give up on the product. Things were way to inconsistent for my liking. Here’s a really good episode followed by four “meh” episodes. Like did we really need that (S P O I L E R S…………..) Governor transformation only for it to amount to nothing? How about the episodes leading up to the arrival at Terminus? Talk about a slow burn. What really pissed me off about that was how good that finale ended up being. If we had skipped over all that Governor crap maybe we could have had a better string of episodes.

Needless to say season five turned into a make or break season for me, and I felt the show delivered on a very consistent level. I actually feel that it was the best season of the show. Yes there were a couple of episodes that were “meh” but for the most part the story telling was solid, the tension was high, and there were tons of deaths and surprises. Not to mention, I felt the show delivered episodes that had tons of these 70’s style horror movie feels (looking at you The Distance. I think) which I’m a sucker for. Plus being a reader of the comic watching the show step into some of the crazier territory had me feeling pretty amped.

Which leads me to today’s post. There was an event earlier in this season that had viewers kind of losing their collective shit. Is said character alive or dead? There’s no way they could have done that? What?! What!! Whaaaaat!!! I for one enjoyed the move from the show runners even though I thought that it was dragged on a little long and may actually effect future events. Which got me thinking…

The finale of this season is really going to piss people off.

Like for realsies. One of the things I’ve found interesting about watching the Walking Dead is how it varies from the source material. There are major differences like how long Shane was alive for, the fact that Judith made it past the prison, and how the Governor was portrayed (for those curious the Governor was waaaaaaaaay worse in the comics. It’s not even close and I feel the show failed to capture the scariness of the character). Then there are you minor differences like switching Daryl and Tyreese’s rolls around (Tyreese was Rick’s right hand in the comics since Daryl doesn’t exist in that universe), the entirety of Carol’s character, and last weeks romance happened between Rick and Andrea (who is still alive in the books). For the most part I’ve had little problems accepting these differences, and have found a way to separate the comics and the show, an exercise I’m going to have to try and develop for this up coming season of Game of Thrones.

As I have been watching lately though I have noticed that the show has been directly drawing on the comics more and more each episode which has me really excited. We are about to enter some crazy territory Geeklings, and I’m more then pleased to see the loyalty the show is showing to the books. Which in turn brings me back to the point that the finale is really going to piss people off. And I think it’s great. But I also wonder what it could do to viewership. When something shocking happens you always risk the possibility of chasing away some of your core audience. And believe me when I say there will be no do overs for this.

Let me paint a picture for you Geeklings. About four years ago I was living with my sister and her husband (Jen and Paul what up?!) while I was going through some life transition stuff. I got into the Walking Dead comics a little late (but way before the show) so when I first started reading them I read the trade paper backs. A tradition I have kept even though I have very much wanted to switch to the monthly issues. I just have a tough time abandoning the graphic novel collection. It just looks so fantastic. Any way… I was in their kitchen reading volume 17 trying to space out the reading. Look at it this way. Each volume of the Walking Dead trades contains up to six issues (or months) of story telling so I try not to breeze through it in an hour. Got to make it last people. Volume 17 contains the 100th issue of the Walking Dead, which is such an incredible accomplishment from an independent comic, so I knew something major was going to go down. Up until this point the Negan character had been alluded to but still a no show. From what I could gather he seemed kind of like a legit force but our merry band of survivors should be able to purge him in six to eight issues and move on to the next problem.

What I didn’t expect was how I would react to issues 99 and 100. For those of you curious I have tried to recreate the moments today just so you could get the feel. For example while reading issue 99 this is kind of how I felt during a very surprising moment. 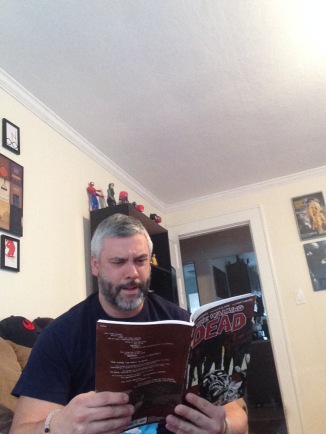 This first scene was very unexpected and happened out of no where and left me with the “who farted face”. Twenty pages later lead me to this 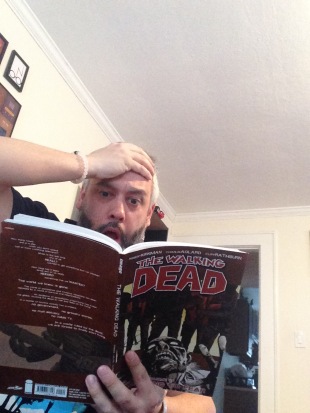 Now please remember that these pictures are recreations and aren’t exact. I have been dealing with these events for over three years now. But expect to revisit these feelings rather soon.

There is a large shock value coming and it’s going to shake the show to it’s core, and I strongly believe it’s going down in the finale. I would like nothing more then to talk about it but I feel guilty even alluding to the events. Andrew Lincoln is already on record saying that he felt “sick” after reading the script to the finale which only goes further to confirm my beliefs.

In the meantime prepare yourselves people cause I have a strong feeling you’re all going to be really upset, but sometimes that’s the cost of good viewing. Happy watching everyone!