Geeklings! Geeklings… I am back, rested, with some of my voice recovered (although it likes to cut out at the worse times. Or the best times if you ask my co-workers), and a heart full of amazing rock n’ roll music. That face melting will stay with me for awhile and was a great way to jump start Captain America: Civil War week. Seriously this week is going to be awesome from a geeky standpoint. Pearl Jam Sunday, Captain America Thursday night, I’m adding Game of Thrones (which I watched last night and leaves me wanting a dragon and with a jaw dropped emoji face), and Free Comic Book Day. It certainly is quite the week Geeklings.

May is actually shaping up to be a pretty eventful month. Besides Free Comic Book Day and Captain America we have the new X-Men movie to look forward to, I’ll be finishing the great re-reading of Harry Potter (actually started Deathly Hallows today and it just so happens to be the anniversary of the victory of the Battle of Hogwarts. How bout that for fate?), and books. Tons and tons of good books are being released this month. Just in time for me to add them to my To Read list for the year. 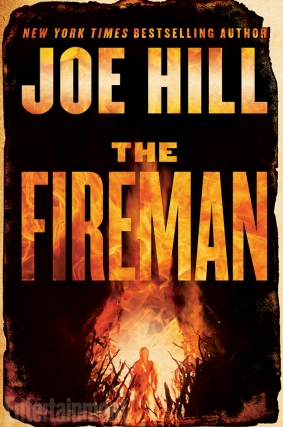 First off we have The Fireman by Joe Hill coming out on May 17th. Joe Hill, in case you don’t know, is the son of Stephen King and a pretty excellent writer himself. Having read his three previous novels, I absolutely love/consumed Horns. That book is packed with dark humor and so much passion and emotion. The premise is kind of out there in the most fantastic way, but if you’re able to look past it you’ll see that underneath there’s a book filled with heart and heart break. Uggggh sometimes I miss reading it. Yeah. One of those books. Any way, The Fireman seems to be Joe Hill’s take on the virus ending the world/apocalypse story, and I’m all for it. This virus called Dragonscale is infecting people and it eventually leads to them bursting into flames. Right? Sounds kind of badass. If it’s anything like his previous work (or short stories which are also very entertaining) we’re in for a treat. Much like his Dad, Joe Hill doesn’t write short books and loves investing in his characters. For a guy who believes that characters make the story you can see why I enjoy his writing so much. Plus the pop culture references are great (especially if you like comic books… Joe Hill writes those too in case you’re interested.) If you’re impatiently waiting for this book like I am then maybe you should read Horns (do it!) or his take on a vampire story NOS4A2.

May 24th will see the release of two books that will conclude two different trilogies. Yay conclusion time! I’m going to start off with The City of Mirrors by Justin Cronin because I love the title. I don’t know how many of you have read any of the other two books in the Passage trilogy but you should do yourself a favor and get on that. The first book, which is conveniently named The Passage, is outstanding. It’s a vampire book that spans different time periods starting with when the virus first broke and then jumping a hundred years into the future. Both stories share a connecting factor (I won’t spoil it) and is filled with tons of characters. The book is massive and I found that I couldn’t put it down. I’ve actually read it twice in order to prep for the sequel, The Twelve, which wasn’t nearly as good but had a pretty awesome ending. Which leads me to beg the question, does an awesome ending make an average book good/great or just highlight what the book could have been?

The City of Mirrors was supposed to be released a year or two ago but you know, delays and such. I’m looking forward to the conclusion of this series even though I can’t remember a whole lot from The Twelve. I think this time around I might just use Wikipedia to refresh myself so I can just jump into this one. I wonder if Cronin will split time lines again? It helps add an extra layer of depth to the story plus I love reading things as the world starts to fall apart and humanity has to adjust. That shit just pulls me in.

The final May release (also on the 24th) is the conclusion to the Fifth Wave trilogy, The Infinite Sea. Rick Yancey wrote a pretty badass young adult scifi thriller filled with aliens, apocalypse happenings, and strong characters. Then they made a crappy Twilight wanna be movie. Sigh. I refused to watch it because I liked the book so much. I hate when you see the trailer for a book you love and instantly know that the very existence of that movie pisses you off. That’s why I didn’t see Paper Towns. While the movie looked good on it’s own, I saw too many differences in the trailer for me to think I could enjoy the film. Plus that book… I effin loved that book. I can’t really explain it but I was so moved and in love with it. I needed to read that book. It’s one of those books that I feel I read at the exact moment in life when I was supposed to. The other being Silver Linings Playbook and I will swear on anything that book saved my life. I know that’s so dramatic and I don’t want it to sound like I was suicidal or anything because I wasn’t. I don’t mean saved in that way. But I do mean that when I read that book, I needed that book. It was a time in life where that story made me feel like I wasn’t alone. And for the three days it took me to read it, I saw something about the way my life was and where I was in it and just became very conscience of everything. I’m not explaining it properly but that book helped me re-find myself in a way that I’ll always be grateful for. I’m actually afraid to read it again because I’m so thankful for it. I just want it to be the same always for me, and think I risk changing the impact it had if I read it again. I don’t know…

The Infinite Sea will be the conclusion to a story that got pretty dark in book two. Like surprisingly so. I remember as I was reading it and thinking, “well this has gotten pretty dark” (very insightful stuff, huh?). That might be a book I re-read before reading the conclusion. I just need to touch base and remind myself what is going on. Hopefully Yancey can stick the landing, and they can stop making movies. Just let these books be awesome and badass for peoples eyeholes and mind theaters. Not everything needs to be made into a teenage angst crapfest. Especially when the book tackles themes bigger than that.

See what I mean now? Books on books on books on books this month. My only complaint is how they’re all grouped at the end of the month. I wouldn’t have minded if they were spread out a little better, but hey, it gives me books to carry over into June! P.S. I just found out Chuck Klosterman has a new book coming out in June too! Oh happy day!

Geeklings, feel free to share any books you’re looking forward to. I’m all ears (or in this case eyes) for new reading material.