Welcome back to the Week In Geek everyone! I hope your Monday wasn’t filled with too much suck and gently eased you into the week. If not at least tomorrow is Tuesday which brings us one day closer to Friday. What can I say, I’m a glass half full type of guy. I for one didn’t have a bad day (I was quite busy though) but I will say that it was very difficult for me to pull myself out of the Fortress of Nerditude and to work. I could have easily spent all day on my chair alternating between readings of comics and Deathly Hallows with Hudson the Cat. That would have been a splendid Monday.

Well there’s no need to reflect on what could have been as I’m pretty sure I’ll find a way to work both of those things in tonight during the more boring parts of Monday Night Raw and then again afterwards. So while I’m waiting to do those things lets look at the other stuff this week has to offer.

1. The Flash directed by Kevin Smith- I’ve been a big fan of Kevin Smith’s work ever since I saw Mallrats for the first time. He just seemed like a voice that understood me. Granted some of his films have strayed since he wrapped the Askew universe but there are still some gems hidden in there (give Red State a try if you’re looking for the not the usual Kevin Smith movie). When I heard that he’d be directing an episode of The Flash geek levels started to rise. Smith is a huge comic book nerd (he wrote a tremendous Green Arrow arc for those curious) and knows how to treat these characters with the love and respect they deserve. Considering the way last weeks episode ended (man was that a great hour of TV) and adding in the directing of Kevin Smith, this weeks Flash is sure to be a must watch. 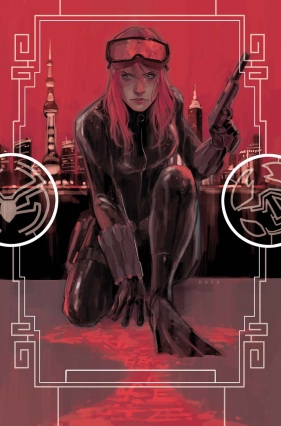 2. Black Widow by Nathan Edmonson- If you read my Captain America: Civil War review you will have seen that I’m jonesing for some Black Widow action (not like that… but now that you mention it I wouldn’t say no). With each movie this character becomes better and leaves me wanting more. I’m happy to see that Marvel is finally seriously considering a stand alone movie for her, and if they’re looking to base it off of anything then they should look no further than Nathan Edmonson’s run. I bought the first six books months ago and they’ve just been sitting on my fancy comic book reader (a.k.a. ipad) waiting to be binge read. Which is exactly what I did over the weekend. I’m hooked and already anticipating this weeks pay check to go to the next volume of stories. For starters this book is gorgeous, and I don’t mean that in the Black Widow is hot sense. The art jumps off of each panel and seems to use almost a water color type of art (I’m not an art major so excuse me if the terms are wrong. I just know the book looks incredible) that I can’t get enough of. The covers are also something to behold. When it comes to the content inside, Nathan Edmonson has created a cleverly well written book that has plenty of action, espionage, and heart. Natasha lives and breaths on each page and while most stories are stand alone missions they’re never boring. I also have the first two issues of Mark Waid’s run (which I’ve heard is awesome as well) but won’t read them until I finish what Nathan Edmonson started. 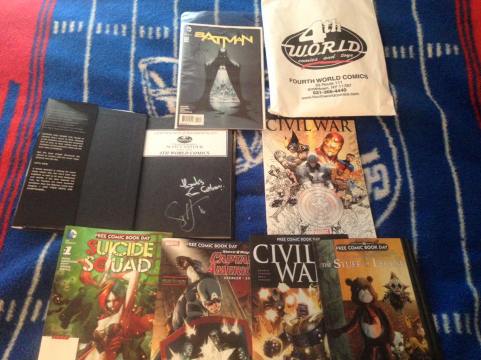 3. Comic Books In General– I could be just riding the high from Civil War or I could just be being myself, but all I want to do is read comic books right now. That’s it. And I’ve got plenty on deck to sort myself through. I’ve finally started to make some progress in the months worth of Spider-Man books I’ve neglected not to mention that I’ve bought a number of Civil War ties ins because they were on sale and I’m feeling nostalgic, and I have Ed Brubaker’s Winter Solider story arc to read because (A) Captain America and (B) Ed Brubaker’s Captain America books are beyond excellent. Free Comic Book Day was a blast and I’ve already consumed Civil War II #0 and have a pile of FCBD books to turn my attention to next. It seems that just as I start to make progress in my books that I get a ton more. It’s my favorite vicious cycle if I’m being honest. 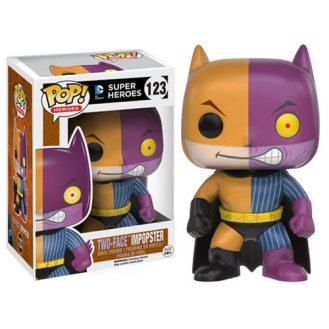 4. Pop Vinyl DC Imposters- My favorite collectible announced a new line of upcoming pops and I have to say they’ve got my interest. They’re calling them imposters and the DC versions have Batman dressed as many of his villains. I have to say they look pretty tremendous and I already sigh with the money that will be leaving my wallet towards the Two Face, Penguin, or Scarecrow versions… or all of them. Maybe. I heard they’re going to do a Marvel line to so maybe I should wait to see those first before I get all crazy town banana pants.

5. Willow- As a kid I had a mild obsession with the movie Willow. Okay mild is putting it sort of lightly. When I was in second grade it was pretty much all I talked about and even somehow convinced my teacher to let us watch it one rainy day before Christmas break. See, my obsession with pop culture type things started at a very young age. Any way, this Friday my sister and our friend Michael will be having a movie night and re-visiting the splendor that is Willow. I haven’t seen this movie in years and am looking forward to seeing what I’m sure will be the spectacular terribleness. If nothing else it will be good to check in with second grade Kevin and a few laughs. Plus I found out one of my closest friends is afraid of Willow and I can not wait to exploit that for my own evil gain.