Geeklings, it is Monday and you know what we do on Mondays. We geek out! Honestly, geeking out is one of my favorite things in the world to do, and there are so many different ways to geek out. For example take Suicide Squad, there was an Harley Quinn easter egg early on in the film that was a call back to the characters origin and I geeked out over that. Yesterday I geeked out about someone’s t-shirt (for the life of me I can’t remember what it was… I’m very tired) and high fived them. Trying to spread that joy. Or last night while up in Boston rocking out to Pearl Jam (#notsohumblebrag) I geeked out when the band started to play “Smile” a song I had never heard live but comes off my favorite album of theirs, No Code for those of you who are interested. See what I mean? There are a plethora of ways to geek out. I’m honestly not entirely sure what my point was here but you get what I’m saying. Geeking out is fun! Yeah… that was my point… sure

Like I said I’m a bit tired Geeklings. I rocked my face off last night up in Boston watching Pearl Jam metaphorically tear down Fenway Park, and now I’m tired from drinking and dancing, bruised because at some point I slammed my knee into the seat in front of me, and currently have the voice of 12 year old boy from all the signing and screaming. I’m in some state folks, but I’m here because there are some things that are just bigger than you are.

Before I start breaking stuff down we got a lot of things to look forward to this week. For starters we’ll be reading Maggie Carr’s first I Am Geek post, most likely tomorrow, which is all types of exciting. She just emailed it over to me, and I’ve only had the chance to read the first few paragraphs (my eyes are tired and I want to give it my full attention. What?!) but you guys are in for a treat. Not to mention I should have my Harry Potter and the Cursed Child review up, most likely tomorrow too, but I’m still digesting that story. I have thoughts fear not. In the mean time let’s break down what we should be geeking out about this week (see what I did there? I brought that whole thread full circle. Really nailed it)

1. Sausage Party– We were driving home from Boston and my brother in-law had the Howard Stern show on, and the only time I actually listen to Howard Stern is in these types of car ride adventures, and Seth Rogen was his guest. The one thing that stood out the most was just how awesome of an interview Seth Rogen is. Like, I’m pretty sure the two of us could be friends.I thought this watching him on Talking Preacher after the Preacher finale, but Stern really gives him an opportunity to be himself. It also seems like the wait for Sausage Party has been forever almost like this movie seems like it should have been released months ago. It’s going to do for food what Toy Story did for toys. Now that may be a super ambitious prediction but you might think twice before eating some baby carrots. At the very least the cast is tremendous and there will be laughs a plenty. I expect it to knock Suicide Squad out of the number one spot and score itself a huge R rated movie opening.

2. Luke Cage trailer- Through my travels on the interwebs today, which mostly consisted of Instagram and Facebook and the occasional IGN comics page, if I’m not Googling something specific then I’m a legit creature of habit on the internet, and learned that Marvel and Netflix will be dropping a new Luke Cage trailer tomorrow which is super exciting. It hasn’t even been a month since the, I guess teaser trailer (?), from Comic Con was released so I expect this to really set up the season as well as Cage’s villain. And maybe this trailer will let us know if Jessica Jones will be showing up at all, and I’d be surprised if she didn’t. I want to say the show comes out in September, but I’m not entirely sure (September 30th. I just looked it up. Like literally it’s on the poster above), and it’s time to expand this part of the MCU even further. If Daredevil and Jessica Jones are any indication then Luke Cage should be gritty and badass as eff.

3. Star Wars: Rogue One trailer– Speaking of trailers, the word on the street is that a new Star Wars: Rogue One trailer is going to be broadcast on NBC during their Olympics coverage which instantly becomes the most interesting thing to come on NBC since Community left (#sickburn). It seems that the build up for Rogue One has been of the mentality “leave them wanting more” and after a poster release and a cover story in Entertainment Weekly it’s time that we got some more footage. I for one would really like to see some of Mads Mikkelsen’s role and maybe, just maybe… an appearance of Darth Vader! For those of you who don’t obsess over these things like I do, it has been confirmed that Lord Vader will be making his presence felt in this side story, and I can’t wait to revisit with a Vader who was at the height of his ass kickery (you all know New Hope Vader is a boss). Although chances are I will not be watching the trailer on NBC but waiting for it to show up on my Faceyspace feed because that’s how trailers should be watched. Duh.

4. All Star Batman– In the grand scheme of things, Scott Snyder has been away from Batman comics for only a couple of months but in the construct of my over obsessive I need it now mind, he’s been gone a life time. Well the wait is over as Snyder returns to Batman books this week with the release of All Star Batman which he is dubbing as his Long Halloween which should make any and all Batman fans squeal with joy. Or was that just me? Nah, you guys squealed too. For those of you who don’t know what the Long Halloween is, Christopher Nolan used it as the foundation of the Dark Knight so yeah… kind of iconic. Look for All Star Batman to explore more of Batman’s villains and I believe it starts with a cross country road trip with Batman and Two-Face as they’re being pursued by… I’m actually not sure but who cares because it’s a Scott Snyder Batman comic. When I talked to Snyder at a comic signing he said to keep an eye out for Talon (from the Court of Owls) so that could be all types of awesome. 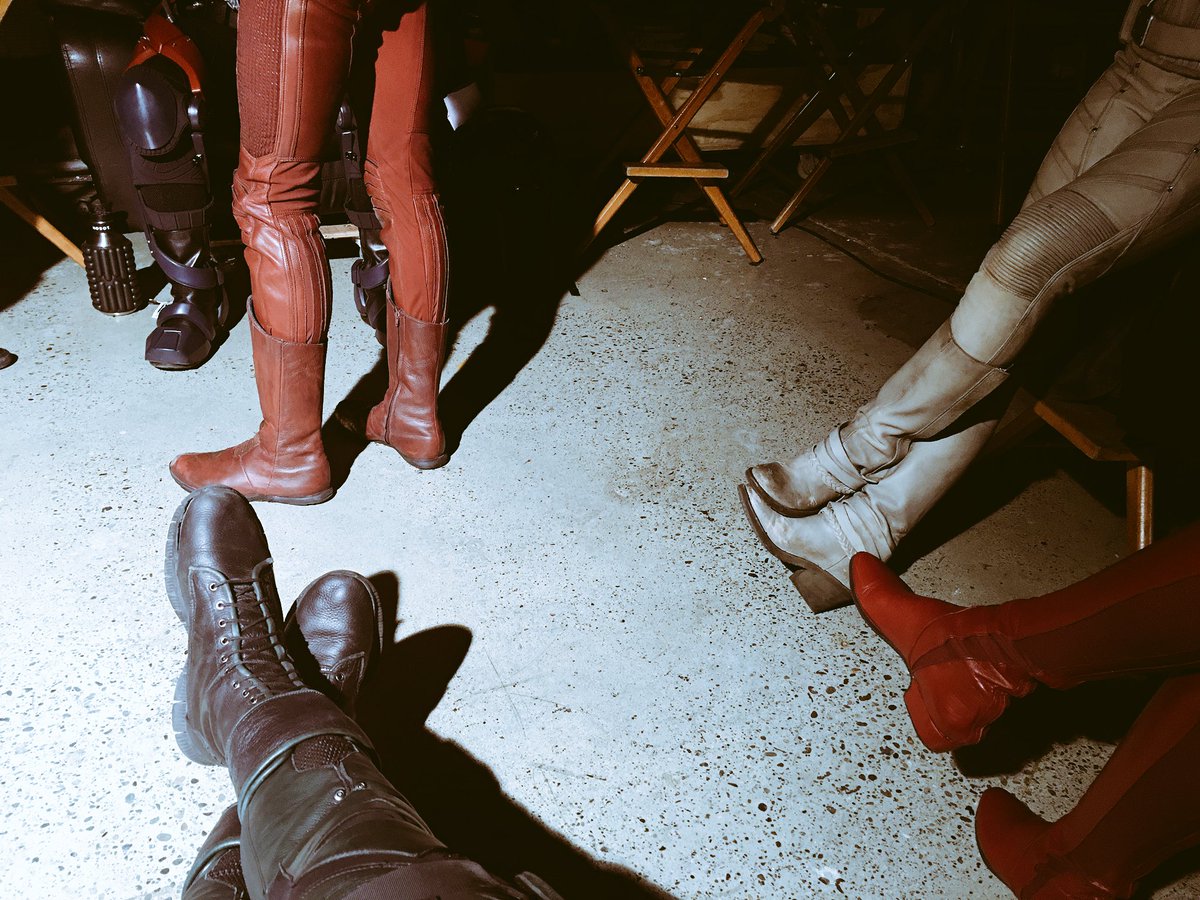 5. Arrow/Flash/Supergirl/Legends of Tomorrow Crossover tease- I’ve been cleaning up my DVR as of late and am just about finished watching last season of Modern Family and I think the next thing on the list is trying to finish Legends of Tomorrow. I had a tough time getting into it though but I’m willing to try, if only, so I can appreciate things like the upcoming mega crossover event coming next season. But come on, this picture is all types of geek out worthy (see that? Brought it back around again… I’m so good at this) and I suspect the event will help restore the time line that Barry screws up with the Flashpoint event. I also suspect that this crossover will bring Supergirl into the same universe as the other CW shows. Either way I’m in.