A million movies come out every year, and most of them (let’s face it) aren’t that great. But among those not so great movies are special films that sit precariously on the paper-thin line between terrible and sublime. They are movies that could not have been made that way if the creators were trying: they just happened through some God-blessed series of events. These movies are called guilty pleasures, and they’re exactly what this series will explore. Welcome to the horrendous/amazing ride. Buckle up.

For the first entry in the series, I’ve chosen something a little different than most of the movies we’ll cover: unlike most guilty pleasures, it purposely tries to recreate the feeling found in such movies. We’ve seen this trend bloom in the last few years: pulled ahead by SyFy’s Sharknado series. And indeed, the same company that brought you Sharknado, The Asylum, decides if it ain’t broke, don’t fix it, and makes another shark film: Three Headed Shark Attack. 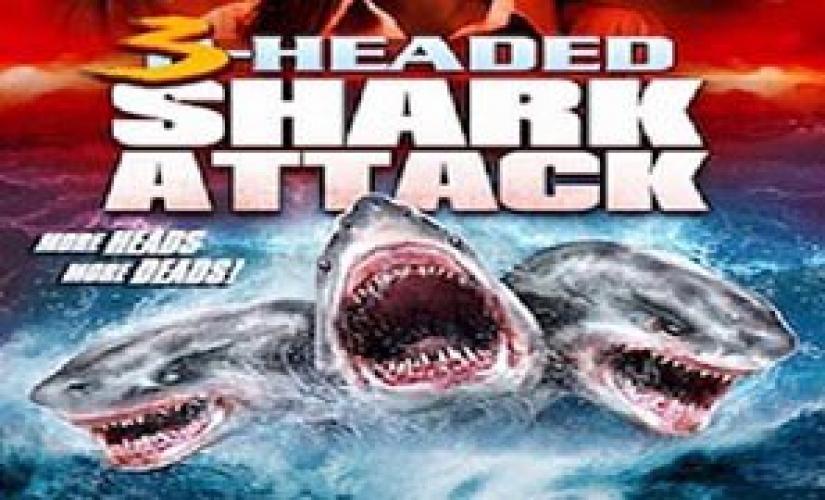 Oh. My. Stars. First of all, please note the tag line: “More Heads, More Deads!” WHAT? What are “deads”? I’m imagining an old-timey detective approaching a grisly murder scene, the Chief of Police crossing the yellow tape and saying to him “We’ve got a lot of deads in here.”

Now obviously from this tagline, we pick up what The Asylum is putting down: it’s supposed to be campy. If you look at their other work ( Mega Shark vs. Crocosaurus  , Mega Shark vs. Mecha Shark , Mega Piranha ) The Asylum has their niche: they’re in the business of guilty pleasure. (They also distributed Carmilla, the Lesbian Vampire ; more on that in the coming weeks: OH MY GOD THAT MOVIE.) I have seen many movie by The Asylum and I always have a blast watching them, as was the case with Three Headed Shark Attack.

So let’s get into this damn movie: I picked it because Kevin had recommended it to me via instagram (Follow me @maggiecar if you like selfies, movie making, and horror) when I mentioned I was really into horror of this variety. I work from home most of the time, so as soon as I read the words “Three Headed” I was looking it up on Netflix. And my God, it didn’t disappoint. 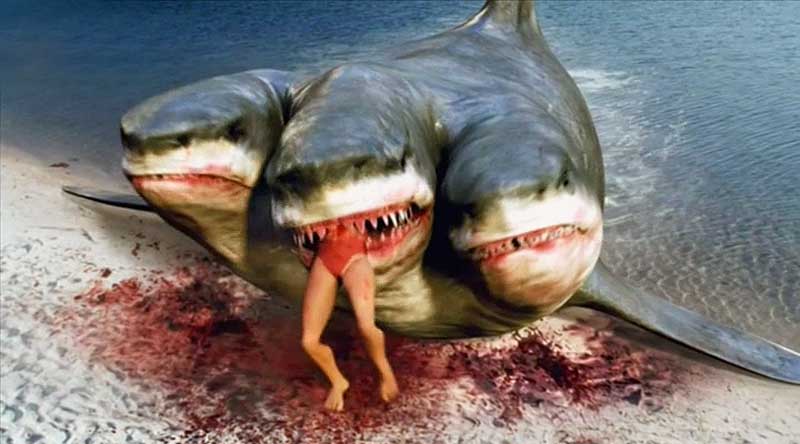 You see this image about TWO WHOLE MINUTES into the movie, only after seeing FOUR WHOLE BOOBS. And let’s talk about that: I thought because this was under the Syfy label we’d only see lots of bikinis a la Sharknado, but this shit went #straighttostreaming, which means OMG LOTS OF BOOBS. At one point we see a scientist gets out of the water and change out of her wetsuit, for literally no reason. Just for boobs.

So we see a lot of girls tanning and then they get eaten by a shark with three heads. At this point I google the movie and find out that it’s a SEQUEL to: (drum roll please) TWO Headed Shark Attack. Naturally.

So then after that we get into the exposition scenes, which my fiance described as having the same feeling as “a porno without the sex.”  Karrueche Tran, of fashion world fame, stars as Maggie (great name), a newbie scientist who even in the middle of the ocean after being attacked by a three headed shark looks like she just applied new makeup. Her beauty is hilariously distracting: at one point while a ship she is on is tipping violently, we see a shot of her with perfectly blown out hair and fresh sparkly eyeshadow. I mean, girl looks amazing: I’d want to look like that in a monster-disaster movie too. (And apparently so does Megan Fox.) But basically you know the drill – the three headed shark attacks starts destroying everything, and people die, etc. – and then, suddenly, Danny Trejo.

Yes, Danny Trejo. How or why is not important, all you need to know is at one point Danny Trejo machetes one of the shark heads off to reveal THREE MORE SHARK HEADS. YES THEY’VE JUMPED STRAIGHT PAST FOUR. WE ARE NOW TALKING ABOUT A FIVE-HEADED SHARK.

I’ll just give you a minute to take this in.

Three Headed Shark Attack is obviously ridiculous, but fun AF. The special effects are the same quality you’ve seen in Sharknado, and there’s enough ridiculous lines (“That’s not a whale!”) to last a whole evening. But I have to be honest, while it’s fun, it kind of bums me out that all of this silliness is intentional. Don’t get me wrong, I love that movies like this are being made, but they just don’t have the same breathtaking, stupendous quality of a movie that didn’t intentionally set out to be silly.

But this only the first installment, so I have time.