Yesterday, after I very excitedly hit submit on Maggie Carr’s first I Am Geek post, I sat in front of my keyboard and tried to write something. I had just the thing in mind too. I thought about it all day, tried to space out my areas of attack, and then I sat down in front of the keyboard and… nothing. I got half a paragraph and it all felt wrong. Suddenly I didn’t feel so confident talking about my subject anymore. Was it because I was excited and distracted by Maggie joining the crew here? I don’t think so. I was very excited about that but I wanted to contribute too and give you guys even more I Am Geek to look over. Yet I couldn’t find the words.

You see, Monday as I traveled home from Boston I finished reading Harry Potter and the Cursed Child and I digested that for a day and a half. Tried to get my thoughts together and give you guys some sort of a review because the truth of the matter is I have thoughts. Who would think that a man who runs his own website/blog would have thoughts of his own? Such an original concept and maybe a little out of left field, right? Needless to say I had thoughts and not all of them were, for lack of a better word, magical.

Having just finished re-reading the Harry Potter series I can tell you first hand (as if you didn’t already know) that there is something magical about finishing a Harry Potter book. Despite what happens within the story, deaths of beloved characters or Harry wrestling with puberty (I still want to slap Order of the Phoenix Harry open handed in the face), you always closed those books feeling something inside. There are a number of different emotions running the gambit of heartbreak to feeling alive, but they were there. I call things like the feels. Every time I finished a Harry Potter book I had a strong case of the feels, and yet Monday as I closed The Cursed Child on a ferry heading back to Long Island I had… nothing.

My immediate thought was that it was cause I was a little fuzzy from rocking out so hard the night before and that had kind of ruined my perception of the last sixty pages of the story. I mean folks I rocked out hard. It’s not every day that you get to see Pearl Jam and for me it’s one of the closest experiences I have to going to church. But as I digested the book I came to the conclusion that that wasn’t it. Yes I was tired and sore from dancing (or whatever the hell you call what I do at a Pearl Jam show) but it didn’t lead to a disconnect to the book. The book lead to a disconnect from the book.

Allow me to explain.

Those of us Harry Potter fans know exactly the feeling you get in the pit of your heart when you open a Harry Potter book. Immediately it’s there and it’s recognizable like you’re mother calling you inside after a night of playing outside. It’s home. It’s comforting. It’s welcoming. It’s love. And I’m sorry to say that The Cursed Child didn’t welcome me in that way. In fact I almost felt like a stranger who arrived at someone’s house without knocking. Like maybe I shouldn’t be here. Maybe this is kind of wrong.

And that bothered the hell out of me Geeklings. I wanted that feeling and I was upset with myself for not grasping it. Maybe I missed something in the overall narrative or maybe it’s one of those this is where I am in life moments and I can’t connect with this. Maybe it’s all of it. I don’t know. I don’t have that answer. I know the play creates two wonderful new characters in Scorpius (especially) and Albus (who is kind of like Harry in book five *slap*) and presents a story that would feel at home on CWs The Flash. It just didn’t feel at home in the world of Harry Potter. 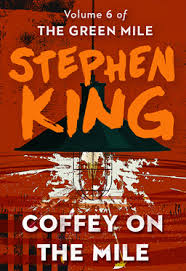 I won’t get into spoilers because that’s unfair. I will say that I didn’t like the big twist at the end because for me it didn’t fit into the overall Harry Potter narrative. How? How is that possible? How is that a thing we didn’t know about before now? You know what I mean? So I closed my book on that ferry feeling kind of empty and unresolved inside. And that sucks when fiction does that. Any type of fiction. Needless to say though it didn’t stop me from reading yesterday, and I picked up the sixth and final part of the Green Mile and something happened.

While I sat upstairs at my job reading the last 90 pages of this story something started to bubble inside of me. Something that had been missing from the previous reading experience. They were there. Bubbling underneath my rib cage and pulling at my eye strings… the feels. And they wanted to be released.

I finished the Green Mile today. As a matter of fact I finished it about an hour ago. I came very close to finishing it at lunch but ran out of time. What I didn’t run out of time for was my emotions. The last part of this story is beautifully crafted and heart breakingly gorgeous. I understand that that’s a weird word combination but it’s also the truth. The ending of the Green Mile is sad and hopeful and upsetting and in some ways so is the ending of The Cursed Child (actually in a lot of ways), but what was different here was I felt that connection. And instead of seeing the bleakness and the sadness in this ending I saw the beauty and the wonderfully crafted narrative. The hope.

Having read the story as a serialized collection (as it was intended) I thought the first three parts were okay. I’ve read enough of Uncle Stevie’s books to understand what are the good ones and what are the ones that will stay with me forever (The Long Walk, The Stand, The Dark Tower) and I had chalked the Green Mile to the former. Nothing wrong with that. But those last three parts… wow. It’s like King became more comfortable with the serialized story telling method and these three parts used to conclude the narrative are some of his most beautiful story telling. And because of that this book had me sobbing upstairs during my lunch hour. Feeling not hopeless but hopeful.

I wanted that kind of emotion to pour out of me during The Cursed Child but that story seemed to repress it. Like it almost didn’t want me to let it out and chose to present situations that should have been emotional but just didn’t resonate. The Green Mile was different. Obviously the emotions stem off the story itself and it’s events and the characters within it, but it also has to do with the writing and it’s beauty. Reading a Harry Potter book is like coming home and when I read I look for that feeling in books. That welcome mat of words that wraps you up in a hug and doesn’t let go even after the book ends. And maybe that hug was fiercer from the Green Mile because it didn’t come with The Cursed Child. I could picture those words wrapping their big John Coffey (sounds like the drink but spelt differently) like arms around me, and I let myself be hugged by them. Because I needed it. Because I had missed it when I thought it should be there.

The heart of good fiction is bringing out emotion in it’s reader/viewer and when that emotion doesn’t come it almost feels like you’ve been short changed. There’s nothing worse than anticipating emotion and not finding it (a joke I’m sure I could make about my dating life), but sometimes that emotions comes from places you weren’t expecting. It sounds like one big life metaphor and maybe that’s what reading is. I don’t know. Maybe I’m just reaching for a conclusion right now, and that’s partly true. But mostly it’s the other thing. Mostly we just want to be hugged, and there’s no better feeling in the world when fiction wraps it’s words around you. Suddenly all is forgotten and the world shines a little bit brighter and you forget all the other stories that haven’t resonated. Because this one has and this one is telling you it’s going to be alright…

2 thoughts on “Book Shelf: A Tale of Two Books”