Geeklings, how are we doing? A very happy Monday to you all (if such a thing can actually exist). Not going to lie, I’m feeling pretty good over here. Took myself a mini vacation (or just a four day weekend) so I got my relax on and was able to get a lot done over the weekend. For starters I officially caught up on Tom King’s The Vision and… sweet Jesus is that an excellent comic. Although now I have to adjust to a life where I have to wait for the monthly release. Life can sometimes be cruel. I finished binge watching a Netflix show that will be appearing below in just a minute (oooooooh the anticipation)  and then wrote a kick ass column about it for Fan Fest News (I’ll give you the link below as well #keepwaiting) not to mention I progressed in the re-watching of Stranger Things, and got paid to re-watch Suicide Squad which turns out to be a better movie the second time around. For serious.

A pretty full weekend that allowed me to squeeze in a number of geeky things which is always good. Fear not, I was social too but had some down time in the mornings and night. Truth be told it has been so freakin’ hot over the last few days that I’ve tried to keep myself semerged in water at all times. Poor Hudson the Cat with all that fur though. There were a number of times this weekend when I worried he would just explode from the heat leaving my apartment a fur covered blast zone. Luckily this did not happen. I can’t handle trauma like that.

Now that I’ve caught you up on all the comings and goings you didn’t ask to know I suppose it’s time to break down this Week In Geek. 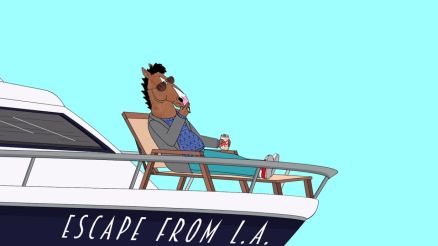 1. BoJack Horseman season 3– I figured I’d ease your anticipation right off the bat because I spoil you guys. I finished watching season three of BoJack Horseman last night, and wow, what a season. I would argue that it’s the shows best (and probably the reason it immediately got renewed for season four), and really, really packs on the feels. Nothing is safe this season as the show tackles topics like abortion, substance abuse, failing marriages, and validating ones existence (which has been a constant theme for the show) and at times the viewing is sort of uncomfortable but that’s what the show is striving for. There is an entire episode that takes place underwater and is sans dialogue. Instead what we get is an episode that dives deep into character and takes on ones ability to fit in when constantly feeling like an outsider, and debates the difficulty of wanting to say I’m sorry without knowing how. Not to mention the episode (“It’s You”) which ends with some of Aaron Paul’s best work on the show, might encompass everything we need to know about the title character. BoJack Horseman is not afraid to punch you in the emotional gut leaving you with your mouth hanging open, stunned, wondering why you continue to watch. But it’s masterful storytelling mixed in with terrific voice acting (Will Arnett is flawless in this role), and super addicting. If you need further proof swing by Fan Fest News and read my column about the show, here. Super proud of it actually (#beingmodest). And if anyone can tell me where to download Grouplove’s end credit theme I’d be forever grateful. It’s been three seasons and I can’t get it out of my head.

2. Darth Vader– I think we might on the verge of a Darth Vader resurgence, Geeklings. The prequels didn’t do the character any favors and scenes added to Return of the Jedi have helped mirror that perception, but suddenly there is a change in the air (can you feel it?). We can start with his appearance in the Rogue One trailer. While it’s only a glimpse it’s enough to fill me with joy. Rogue One takes place during the height of Vader’s scary/badassness and I think the world needs to be reminded of that. Plus if you’re looking for further proof of the awesome that is Lord Vader, look no further than Kieron Gillen’s Marvel comic Darth Vader (such a catchy title). Which takes place after A New Hope and helps re-establish Vader’s place within the galaxy. If there was ever a character who needed an open apology like this it’s Darth Vader, and I hold my breath waiting for him to be returned to form.

3. IT teaser images– as of yesterday I noticed Stephen King has been posting images on his Faceyspace page from the upcoming IT reboot, and it was enough to get me excited. I know that Tim Curry’s depiction of Pennywise is a classic, but have you tried to actually watch the original version of IT?! It’s all types of terrible. I tried re-watching it immediately after I read the book for the first time and turned it off ten minutes in. One cause it was super bad and two because it just didn’t match what I had imagined. These images are enough to give me hope that this version of IT can ruin my life like the book did, and if you noticed Richie is being played by the same kid who played Mike in Stranger Things (his name is Finn Wolfhard… which is such a badass name). Insert excitement squeals here.

4. Stranger Things soundtrack Vol 1– Speaking of Stranger Things, last Friday saw the release of the first volume of the soundtrack. For those of you hoping for an awesome 80’s playlist, this isn’t what you’re looking for (but hang around a second, will you?). But for those of you who loved the haunting/synthesized tones of the score, well, look no further. The music is eerie and tone setting and a lot of fun to listen to separated from the show. In a lot of ways it reminds me of the score from It Follows. I’m already looking forward to the second volume which will be dropping this Friday. But for those of you who are looking for that awesome 80’s playlist I present to you the official Stranger Things mixtape courtesy of their Faceyspace page. Do what I’ve done, collect the songs you don’t have off itunes, and slap together your very own Stranger Things soundtrack.

5. Westworld– What exactly is Westworld? I’m not entirely sure but I’m willing to share with you what I do know. It’s a new HBO series based off a Michael Crichton movie that he both wrote and directed. I believe the premise is a fantasy world where people can pretend to be cowboys and live out some kind of crazy western like fantasy. Sounds sort of promising right? Now include the fact that the new series will be produced by JJ Abrams (hell yeah Bad Robot), will have Anthony Hopkins and Ed Harris, and will be on HBO which almost guarantees it to be better than most things (unless you’re season two of True Detective in which case I’m still waiting for my apology). The show has been delayed quite frequently but looks to finally take off on October 2nd. Because I need more shows to get addicted to.

There you have it Geeklings. Another Monday another Week in Geek. Feel free to let me know in the comments what’s making your week geeky because sharing is caring. Get ready for the week ahead as I’ve got a feeling that I Am Geek is going to bring it. I’ve got head thoughts bubbling and we still have a new installment from Maggie Carr to look forward to. Gonna be a good one Geeklings! See you tomorrow.