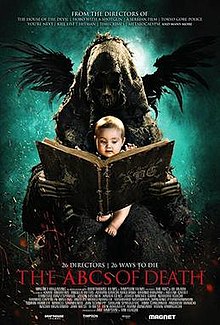 I know what you’re thinking: “I’m sorry, what is the title??”  Yes, dear reader, that’s the same question I had as well.  But you didn’t read it incorrectly: it’s F Is for Fart.

For those of you who are unfamiliar with The ABCs of Death, it’s a horror anthology of 26 shorts from 26 directors and 26 writers – one for each letter of the alphabet. The producers of ABCs assign each creative team a letter, and then each is titled with their respective letter, followed by “…is for…” and then the type of death that film making team has picked. So you have A Is for Apocalypse, B Is for Bigfoot, etc.

Cool premise, right? This idea is great because it gives lots of little-known directors a chance to make something that will be seen by the masses, and you as a viewer can see 26 diverse stories from all over the world in the time it takes to see a single movie.

Indeed, there are a lot of really amazing shorts in this anthology (as well as its sequel), my personal favorites being V Is for Vagitus (The Cry of a Newborn Baby) and D Is for Dogfight. There were others that were disturbing, or lazy, or poorly done.

But only one was a Guilty Pleasure.

Only one was F Is for Fart.

The first time I saw F Is for Fart, which is only a few minutes long, I made my friend pause the movie, and I paced around for a few minutes. I watched it again immediately. And then again. I showed it everyone I knew. And everyone had the same reaction. Everyone had to stand up. Everyone screamed “What? WHAT?!” at the frame over and over again.

Because what. WHAT. IS HAPPENING. Look at that girl. Her head’s on fire. And she loves it. And I love her. It’s the guiltiest of guilty pleasures. It’s a goddamn party trick. It’s a conversation starter. Fuck that, it’s a conversation ENDER.

Guys. GUYS. GUYS. That’s what happens. That’s it. I didn’t make this up. This shit is real. IT’S 100% A REAL THING THAT HAS INDEED HAPPENED ON EARTH.

In case you are wondering, this sublime creation comes from the mind of Noboru Iguchi,who is apparently aware of how hilarious this is, which makes him a goddamn genius.

Here’s another insane image from it. There’s just too many. I can’t stop.

There are so many I could show you. And it’s only, like, a five minute movie! Oh, God, I love it. I love it so much.

If you haven’t seen it, stop reading this, get onto Netflix, and watch it ASAP.  Life is too goddamn short.