I had a different plan for tonight’s post. I actually drafted the opening in my head and was getting ready to put it to screen. I can’t say paper because I try avoiding hand writing things as much as possible. My writing is small and borderline unreadable. There is nothing worse then squinting at your own words trying to figure out what the hell you were saying. Plus I hold the pen incorrectly which causes my hand to cramp… needless to say typing is way easier for me.

As I was getting ready to type up today’s piece my sister called me and asked a very unexpected question, which I’m still not entirely sure why she asked as her phone cut out.

“How would you describe Pillow People?”

Well… hmmmm. Suddenly nothing else mattered for today’s post. I’m not sure what you need this information for Jennifer but here’s how I would define Pillow People. 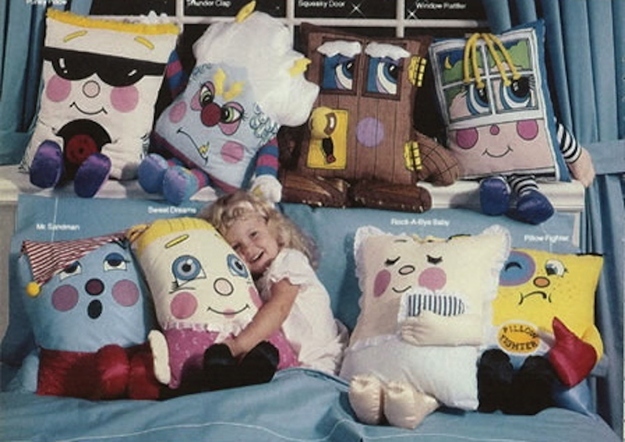 Pillow People have been involved in some of my favorite childhood memories. Those of us who were children in the 80’s (and early 90’s but by then I think they had started to phase out) will remember Pillow People. They were pillows with arms, legs, and faces that were the ultimate stuffed animal because when you were done playing with them you could use them to sleep with. Bonus toy! I know it’s weird referring to them as such but I guess they were technically stuffed animals despite the fact that some of them were windows, boxers, and in the case of my favorite, doors.

I won’t pretend to remember the entire backstory of Pillow People. As a matter of fact I’m willing to say I never knew it. I want to say that there was a cartoon but I’m not entirely sure if that’s true either (Author’s Note: I looked it up on Wikipedia, there was a Christmas special). All I knew was that these pillows were people (hence the very clever name) and the easiest companions to take you to Pillow Land.

What’s Pillow Land? Well I’m glad you asked. Pillow Land was a world created by my sister and I (and I imagine there were many variations through out the world with different titles) that was a whole other world where sleep and being comfortable was the ultimate goal. We would lay tons of pillows, including people, throw, and regular, on the ground and hop from one to the other. It was a sleeping variation of the hot lava game. If you touched the floor you “woke” up and were sent out of Pillow Land, but if you landed on the special pillow (the doorway if you will), spun around while making a teleporting noise, then away you went.

And this is how we would spend most of our Saturday mornings. Throwing pillows on the floor and jumping from one to the next. I’m sure blanket forts were made too and stories were invented, but going to Pillow Land was always so much fun. The worse was when the hot lava game would infiltrate Pillow Land. Picture instead of waking up when you touch the floor you burn to death in a firey lava hug. I also want to say that the lava would burn through pillows making it harder to jump but that could be my adult mind just advancing the rules for my childhood. No way to prove it without a time machine.

Which is exactly what Jennifer’s phone call did. It teleported me back to a world when going to Pillow Land and trying not touching the floor was the most stressful part of the day. It teleported me back to some really great childhood memories. It also made me want to break out Squeaky Door and lay on the floor and watch cartoons with my sister. Although I don’t own enough throw pillows so this trip to Pillow Land would become a real work out… could be worth it.

One thought on “Defining Pillow People”