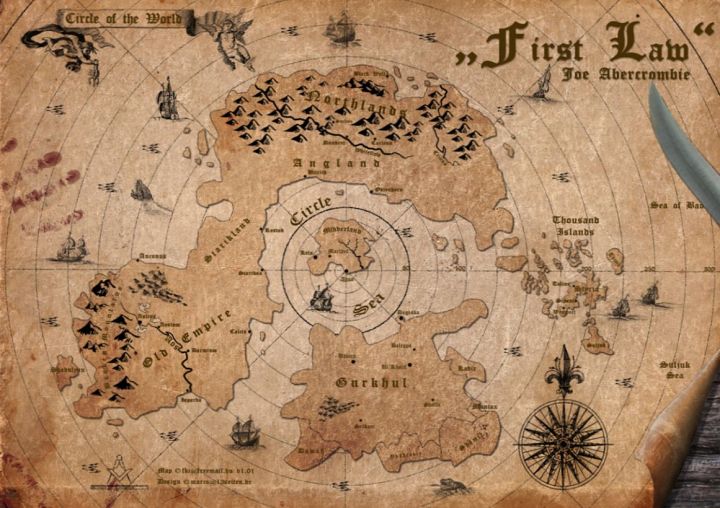 And waiting for George R.R. Martin’s “The Winds of Winter”.

Now that the show has overtaken the books, it doesn’t seem as bad (unless you’re one of those sorts that avoids the TV show in favor of the books, no judgment here), but it’d be nice to have something to read in the meantime.

Ol’ George started a bit of a movement in fantasy that has been quite welcome.  For decades, after Tolkien’s Lord of the Rings, fantasy novels were often populated by plucky heroes, a small hobbit, a humble farmboy, whatever you like – someone who rises to the occasion, saving the world and rarely suffering a moral qualm.  (There have been exceptions, of course – Michael Moorcock’s Elric series, and Glen Cook’s Black Company.)  But since Martin’s blockbuster series actually sent fantasy books flying off the shelf again, there’s a bit of a trend towards the dark and gritty, a trend in which the heroes don’t always win, the villains aren’t always darkness personified, and there are many, many shades of grey.

He’s spawned a great deal of imitators, some more talented, some less.  The tendency to lean into the grimdark can be overwhelming for some,, and it’s hard to find writers who realize that gritty fantasy doesn’t just mean “depressing things happen, also there are some rapes.”

Luckily, there are a few of his acolytes who’ve taken the RIGHT lesson from his books: that bad things happen, but for a reason; that true heroism is rare, but is made all the more impressive by the contrast with the darkness; and that those who lurk behind the curtain and stay three steps ahead of everyone almost always come in first.

Of these writers, my favorite has to be Joe Abercrombie, a British writer who is remarkably prolific (a nice contrast to Martin).  He’s come out with nine books in the time it took Martin to finish one.

His flagship series, The First Law, is a trilogy about a strange collection of heroes, bound and determined to save their world from an impending doom.  Sound familiar?

The First Law follows several characters – each chapter from a character’s point of view, which is highly reminiscent of Martin’s style.  There’s Logen, a Northman (read: barbarian) with a wry way of looking at the world and one hell of a temper.  There’s Glokta, a crippled torturer whose sardonic thoughts echo Tyrion Lannister.  Once a brave and vain hero, he was captured and tortured himself, and now he visits these same tortures upon those his superiors order.  And there’s Jezal, a young nobleman whose confident naivete recalls the young Sansa Stark.  (Needless to say, like Sansa, the world has a way of wising those people up.)  Finally, there’s Bayaz, First of the Magi, whose brusque but friendly demeanor may or may not be a facade.  (Gandalf he is not.)

While the first book in the series, The Blade Itself, is clearly Abercrombie’s first book, you can see his skill grow over the course of the series.  The Blade Itself gathers these characters together – almost an “Avengers assemble” sort of beginning – and through the second and third books, Before they are Hanged and Last Argument of Kings, the conflict grows broader and the stakes are raised.  From the northern reaches of Angland (a wild Northern territory home to roughshod warriors) to Adua, heart of the Union (the “civilized” land) to the Gurkish Empire (a desert empire ruled by a Prophet whose soldiers dine on human flesh), the story ranges, soon revealing the true conflict to be one that has been secretly raging for centuries.  (Isn’t it always?)

By the final book, when all secrets are revealed, I found myself stunned by the way Abercrombie had led me to expect one ending – and delivered the exact opposite.  That kind of thing is what I loved about George R.R. Martin’s books, and that is what the First Law delivered.

After the trilogy – a completed and excellent work that any fantasy author would be proud of – Joe hasn’t laid dormant.  Three books followed:

-Best Served Cold, a revenge saga a la Kill Bill in medieval Italy.  Monza Moncatto, a mercenary general, is betrayed by her employers, watches her brother be stabbed to death, and is tossed down the side of a mountain. But she lives.  And over the span of 800 pages, we see her gather a team – a poisoner, a brawler, a schemer, a Northman – to entrap and murder the men who destroyed her life.  Taking place 5 years after The First Law, the book features some of the minor characters of the original trilogy, often casting them in a whole new light.

-The Heroes, a war story: it tells the story of a three-day battle between the forces of the Union and the free men of the North.  We see the battle from many, many points of view, from a terrified recruit to a battle-scarred Northman who’s getting too old for this shit, to the daughter of a general who soon finds herself right in the middle of the carnage.  There’s a cast of hundreds and the slaughter of thousands, and by this point Joe’s writing is firing on all cylinders, creating a truly cinematic sort of work.  (My favorite chapter, for example, titled “Casualties”, pulls a rather clever trick by starting with one character, who gets killed, and then switching the narrative to his killer – who then meets his own grisly end at the hands of the next carrier of the narrative… it’s really fantastically well-done.)  Once again, relatively minor characters from The First Law trilogy show their faces and reveal new aspects of themselves.

-Red Country, a western set in the outskirts of settled territory. When Shy South’s farm is burned, her friend hanged, and her little brother and sister stolen, she sets out with her stepfather Lamb to track them down and bring them home.  Out in the wild country, there’s also a military group led by an old soldier of fortune, on the hunt for infamous rebels.  A little bit The Searchers, a little bit Unforgiven, and a little bit Deadwood, it is, for all its fantasy settings, a western – and a damn good one.

In fact, what I find interesting about Best Served Cold, The Heroes, and Red Country is that while they’re set in a fantasy world, they’ve dropped much of the supernatural parts of the original trilogy.  Instead, it’s just the characters and the world Abercrombie has built that kept me reading.  (Also, some of my favorite parts of A Song of Ice and Fire aren’t the dragons or the White Walkers – they’re the characters, the inter-House strife, the politics and the backstabbing.)

He’s also just released Sharp Edges, a collection of short stories set in the First Law world, short vignettes from around the world that he’s created – including a few moments from the past for many a beloved character.

His next project in the First Law world is a trilogy set in the Gurkish Empire – an area he hasn’t truly explored yet, and I’m of course chomping at the bit to read it.  However, he’s said that he wants to write the whole thing before he publishes it – which on one hand is great (we don’t have to wait long from one book to another) and on the other hand is awful – when will they be out?  2018?  2020?!?

Hopefully Winds of Winter will be out by then, though.

2 thoughts on “No Winds Of Winter, No Problem”