Thank the gods it finally happened. The wait was killing me.I know that it was a foregone conclusion but I’ve been a fan of enough cult shows (Fringe, Community, and Hannibal) to not believe renewal rumors until they’re announced because nothing is official until the network says so. How the hell did we not get a fourth season of Hannibal?! NBC is the worst. The. Worst. They get these amazing shows like Community, Hannibal, and Parks and Rec when it’s clear they don’t deserve them, and then go out of their way to try and kill the positive buzz. Ever since Seinfeld left it seems that NBC goes out of it’s way to hate me. Sigh. This is a topic for another day. Today is about celebration.

It was announced early this morning that Stranger Things would be returning for a second season. I know, I know this isn’t very shocking as it was probably one of the easier things to predict this year, but it doesn’t mean it doesn’t make me happy! More Stranger Things coming in 2017! That’s like the best way to kick off a day that was already New Comic Book Day.

It looks like the second season will have a bit of a time jump (fall of 1984), not much, which will help with the kids aging because that’s what child actors do. They get older so we’re really looking at a limited window to get this story in with the same characters. Unless they do a greater time jump in future seasons. Future season. Look at me getting ahead of myself.

While the wait for 2017 may seem long I wouldn’t be too worried. The Duffer Brothers have been talking about season two pretty much immediately after everyone finished binge watching and we all know that it’ll play more like a sequel than a continuation. Which I think is a unique way to present a new installment to a television program. While an anthology type show could have been interesting, think in the style of American Horror Story, I’m glad that the Duffer Brothers stayed away from that.One of best things about Stranger Things is this cast of kids/characters. I want more of their story. It’s not over yet (clearly) and I want to see it through to completion.

The other promising thing is this trailer comes with all the episode titles included which means the Duffers know the story they’re going to tell. I would be willing to be that a large majority of season two has already been written or maybe outlined which makes the transition to filming that much easier. Most shows take time to film because stories need to be written. The Duffers are very on top of this narrative which makes me believe the wait won’t be as bad as it could be.

The fact is Geeklings, my obsession over Stranger Things has done nothing but grow since I watched it with Jen a month and a half ago (hiiiiii Jen!). Like if I didn’t know I was a person who obsesses over things (who me?! Never!) I would be slightly worried. The season two renewal just helps validate that obsession. Allow me to break down what’s been happening with me and my love for this show. 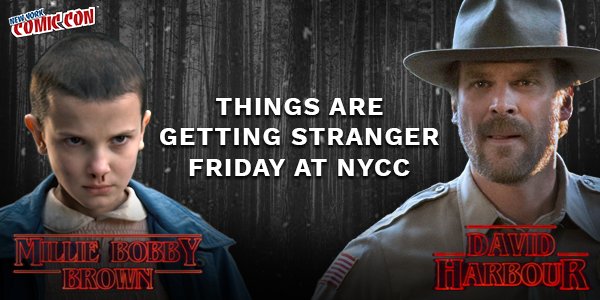 See what I mean? Stranger Things has sort of consumed me since it’s release and it’s been one of the best things to happen this year. I haven’t had a TV show hit me like this since Breaking Bad and Community. Don’t get me wrong there is tons of Game of Thrones excitement but Stranger Things is something else entirely. It is the perfect mix of just about everything I love. There are classic 80’s nostalgia feels with a story that looks like it could have been a Spielberg film or a blending of all the awesome adventures of a Stephen King novel. Not to mention there’s enough unresolved story to lead to theory discussion, which is one of the greatest gifts a work of fiction could give, and the characters are tremendous. You mix all those things together it’s like a perfect storm devised just for me. The better question here would be, how could I not be obsessed with this show? I love it so.