With this week seeing the release of Logan, I thought it might be kind of fun to dedicate this weeks Today In Awesome Comic Book Images to everyone’s favorite Canadian berserker. With the specific intention of covering the story that most likely shapes the structure of the upcoming film, Logan.

I told you guys on Monday that I had just bought (or in this case re-bought) the original Old Man Logan comic book series by Mark Millar. It has been years since I’ve read that series but it was going for $4.99 on Comixology and I thought it would help set the tone for when I see Logan this weekend. Truth be told, as I am a full passenger on the hype train that is Logan, I just wanted to read this series to get myself further into the Wolverine mindset. Think of it as reading travel guides before taking your actual trip.

When I first read this series, how ever many years ago that was, I remember falling in love with the bleak nature of the story. There was a period of time where I became a pretty big Mark Millar fan, he also wrote the first Civil War and Kick-Ass comics, so putting his name on the cover of the book made it a must read for me. As I’ve read more of his stuff I’ve grown a little tired of his writing process, which is a shame because Millar does put out some great stories. The only thing is, he throws so much into those first three or four issues (especially with the creator owned titles) that it instantly garners movie talk, and then the focus shifts from the comic to the movie. This brings about painfully long delays that ruin the flow of the story. Correct me if I’m wrong but I’m pretty sure that Kick-Ass the comic wrapped after the movie premiered. That’s kind of lame if you ask me. That’s all just a side note though, back then I was a young man in his twenties just getting back into comic books and Old Man Logan seemed to serve both my love for super heroes and post apocalyptic story telling. It was a win win.

Essentially the premise of the series is that all the super heroes in the world are dead. All of them. I think there was even a specific day where they all died. Spider-Man, Thor, Captain America, Iron Man, the X-Men… all dead. All that’s left is Wolverine and he now lives his life in hiding/pretending that he never was a hero. On paper this sounds like the quite life that Logan may have earned but it’s shrouded in guilt and shame and broken will. Logan’s land is owned by Hulk landlords (I don’t remember why the Hulk siblings are villains but I think it’s safe to assume because whose going to stop them?) and despite their bullying he sticks to his vow to never use his claws again. If you’re thinking this has a real Unforgiven vibe to it then you’re one hundred percent right. There is a total western feel to Old Man Logan which is only highlighted further when Hawkeye shows up asking Logan to make a cross country job with him. In a world run by super villains that doesn’t seem like a bad idea at all. 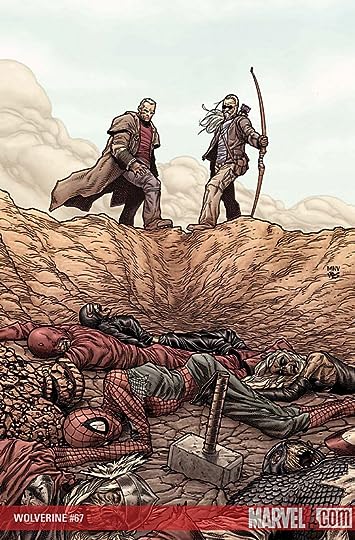 I think Old Man Logan will be the premise of what to expect in the upcoming Logan film. There’s no way that it could be an exact re-telling as Fox does not have the rights to the majority of the characters in it, and that to a degree is a shame. Mostly as a comic book nerd though. I would love to see a film capture the death of all the major heroes and the survival of one. Mostly to see them all on screen together but also because it would be so incredibly different. Massive even.

I’m losing my train of thought here, hold on… I think I got it. Any way, just because Logan can’t be Old Man Logan doesn’t mean it can’t borrow themes and tones. Everything I’ve gathered from the trailers is that Logan is a story about redemption and family and maybe even passing on some sort of legacy that is bigger than the lives you’ve taken or saved. This is all guess work as once the hype got real for me I stayed away from any real plot details. Those threads though are similar to Old Man Logan where our hero is broken and defeated in ways we didn’t think we’re possible for him. We’ve always assumed that Logan has  this ability to turn off emotions to anyone who isn’t Jean Grey, but we learn that that’s not the case. In fact he carries the burden of being a survivor quite heavily, and again, the trailers seem to indicate that there is some guilt and sorrow residing in our hero.

I’m only a quarter of the way through my re-read of Old Man Logan, I’ll be finished by the end of the week, and it has me feeling super nostalgic about the time where I started getting back into comic books, but it has also upped the hype of Logan in ways the reviews couldn’t. I don’t expect a true adaption but if Logan can capture the tone then we’re going to have something special here. I so very badly want to come back here this weekend and tell you just how good Logan is, but in the mean time I’ll tell you just how good Old Man Logan is.

Sometimes we learn the most about our heroes when they’re stripped of everything. We really haven’t seen a comic book movie like that. Perhaps Logan will provide redemption and solace to a character who has suffered his entire life. Perhaps to fully appreciate Wolverine we have to see everything taken from him, and then maybe we can really put value to who he is.