Geeklings, a very Happy New Comic Book Day to you all. In honor of the new Thor: Ragnarok images that dropped today… wait, did you guys not see them? I posted them on the I Am Geek Faceyspace page. See, this is why you guys need to start following the Faceyspace page. I try to keep it fresh with news and memes. Isn’t that what we want from the interwebs? Luckily you can conveniently find said page here. I spoil you guys. Case and point, here are some of the released images.

Yeah, while I’m still waiting for that trailer to drop these images were a pleasant surprise. For one thing it looks like Thor is in full gladiator mode (with a dash of Braveheart war paint) which could only mean that Planet Hulk is going to be legit. I’m kind of hoping that we get Hulk and Thor battling side by side in the coliseum. Hell, I’d be happy watching the two of them do battle. On top of that, Cate Blanchett is almost unrecognizable here but I’m hoping to see her and Loki getting into some mischief together. Plus this Gothic elf vibe she has going on here… I’m all for it. What?!

With the release of these images today I thought I would dedicate today’s post to Jason Aaron’s Thor: God of Thunder series. When I started to make the dramatic shift from physical comics to digital it was around the time Thor: Dark World was released, so naturally I was interested in some Thor comics. I really don’t understand the bad press that Dark World gets, it often circulates the bottom of most Marvel movie lists, because I had a blast watching it. From start to finish I just found Dark World to be a lot of fun and sometimes that’s all we want out of our super hero movies. Come on, there were gods, and spaceships, and Loki, and battles. Dark World just felt full of adventure. I have no problem with that. But there are other times where you need Logan (p.s. thanks for all the love on the write up guys. Meant a lot)

I remember at the time Comixology had a big sale on Thor books so I thought I’d give them a try. Aaron’s first story line exceeded any expectations I may have had. This story was intricate, well plotted, addictive, suspenseful, and just all around awesome. There are three different Thors in play. That’s right, three. There’s the young, youthful, boastful, arrogant Thor. There’s the Thor that we know from present time. Finally there’s the grizzled Thor of the future who is missing an eye and an arm and rules a now empty Asgard. You could easily take all three of these Thors and make one mega Thor, but each of them have had different experiences that have lead them all down the same path. It’s a little confusing but it’s crazy. 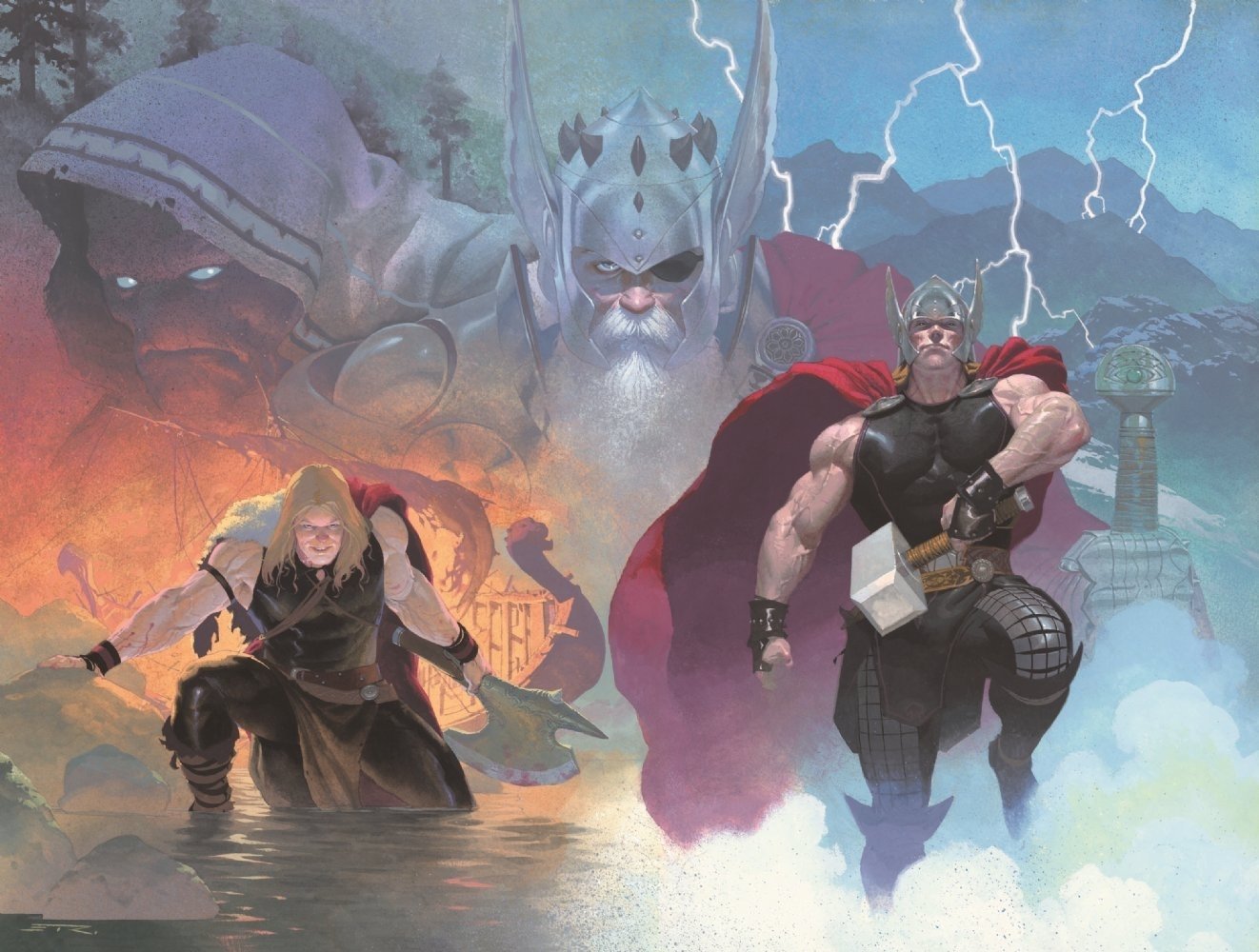 The premise essentially is a creature, who once worshiped the gods, loses faith in them (I think his son or wife dies?). In fact he loses faith pretty hard based off the actions of young Thor… I think. It’s been awhile So what this creature does, is become a god himself and uses his new found powers to kill all the other gods. Yeah, it’s like that. He has the ability to slip through time which is why we deal with three different Thors. The story is compelling and raises very interesting questions of faith and the responsibility of being a “god”. On top of that the art is just incredible. It was probably one of my favorite aspects of the series.

If you’re looking to get into a Thor comic this isn’t a bad place to start. It’s accessible and explores it’s own mythology while expanding on what makes the character great. What better way to celebrate Thor: Ragnarok images then with Thor comics? Trust me, Jason Aaron knows how to weave a story, and these books have been on Comixology long enough where they should be pretty cheap. Give them a whirl!