Depending on who you ask, The Dark Knight is arguably the greatest super hero movie ever made. This is a topic that is of course up for debate because people have different investments, but for the most part the majority of comic geeks can agree with the fact that The Dark Knight not only sets the bar high but also redefines the genre. Suddenly super hero movies became something that could be taken seriously and tackle real life themes. Nolan proved that not every super hero movie had to be campy with cartoon character heroes and villains. It was alright to have substance with your super hero movies that left you thinking and tackling bigger life questions. The lines between good and evil could be blurred, and it was okay for your comic movies to make you think and feel uncomfortable. The game was different after The Dark Knight and it seems that super hero movies have been trying to grasp that lightning in a bottle ever since.

There’s, a now famous, line at the end of The Dark Knight where Commissioner Gordon describes the Batman’s relationship with Gotham City,

“He’s the hero Gotham deserves, but not the one it needs right now.”

You know the quote, it’s abused in pop culture on a daily basis. Hell, I use some variation of that quote either here or as a Faceyspace status, at least once a month. It’s such a fantastic quote that’s so accessible to a number of things, and when it comes to discussing Logan, I’ve found it hard not to associate that quote with the film. Maybe it’s because The Dark Knight and Logan will be heavily tied to each other from here on out, but for me I think it more accurately describes the film. Logan is the Wolverine movie we deserve, and the super hero movie we need right now. Yes, I’ve changed the quote to fit my needs but it doesn’t make it any less true. 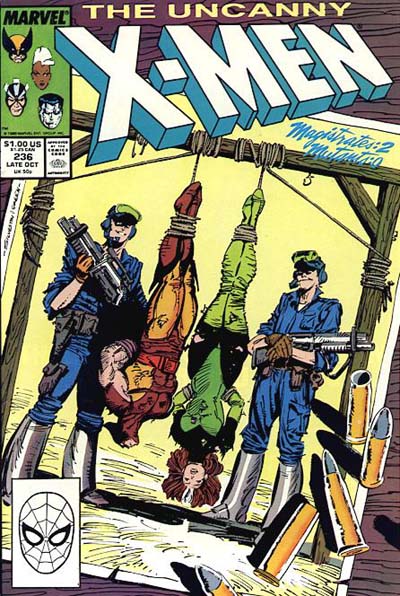 Within the first ten minutes of Logan you see all the missed potential of the other Wolverine films. Ten minutes into an R rated Wolverine movie and it immediately feels right. This is the type of universe that Logan should always have been in. For those of you who have read just one Wolverine comic in your life, know that this character isn’t about being watered down. Wolverine is all types of violent. He’s like the angriest Canadian ever. The first time I ever read an X-Men comic it had Rogue and Wolverine hanging upside down on the cover, and at some point saw Logan just shredding through soldiers like paper while buck ass naked. That’s a beast. I remember reading that at my cousins house in Cape Cod and thinking, who is this guy and where can I find more of him. The first single issue of Wolverine I read saw him battling someone called Tiger Shark and I’m pretty sure he knocked that guy off a freighter to be eaten by sharks (the irony was not lost on me). This dude isn’t the type of hero to hand off the villain to the law, hell, he might not even be a hero. So, you see immediately that putting him in a universe that has an R rating allows the character to breath and unfold the way he was always intended to.

We saw last year with Deadpool that people want R rated super hero movies, but there’s a huge difference between Deadpool and Logan. With Deadpool there was more of a satire, more of a tongue and cheek way of showing how a super hero movie unfolds. Don’t get me wrong, Deadpool is all types of awesome and uses it’s R rating to fit the character and to balance it’s raunchy humor with it’s grotesque violence. Logan though has something different in mind. This isn’t a satire on the super hero genre, there’s a bigger message at play. Logan is a story of family, redemption, recovery, and escaping your past if that’s even possible. It is cold, it is harsh, and it is brilliant.

We hardly ever get to see our super heroes torn down to nothing. There are parts in just about every super hero movie where the hero is knocked down and eventually picks themselves up for their dramatic defeat of the villain, and it’s a feel good moment. The hero has persevered and the world is safe. Logan had no interest in that what so ever. From the moment the film started we saw Wolverine at his lowest, and instead of rising and becoming the hero we know he can be, the majority of the film saw him remain this defeated, damned mutant who was left behind when all of his friends died. It’s just harsh to see a hero stripped down to nothing like this, and Hugh Jackman delivers in spades.

One of the shining aspects to any of the X-Men movies has always been Hugh Jackman’s Wolverine. I remember watching the original X-Men movie in the theater with my parents and seeing the Wolverine of my action figure imagination come to life on the big screen. It was an awesome moment for me and my inner child, and I remember running to the local drug store once the movie ended and stocking up on X-Men comics because I wanted to hold on to that feeling of my childhood just a little bit longer. Hugh Jackman breathed life into such an iconic comic book character that it’s hard to envision anyone else in the role. It is highly documented the highs and lows of Wolverine on the silver screen (we will not talk about X3 or Origins) but Jackman has never been faulted for any of it. It has always been the writers or the director. Jackman holds Logan in such high esteem that we know he wouldn’t do anything to betray the character so he was always given a pass when his movies were panned.

With Logan, Jackman takes ever moment of his seventeen year career playing Wolverine and lays it all on the line. Everything. His performance is raw and naked and brutal and savage, and it’s filled with a genuine love and respect for the character. Having someone who has been Wolverine for so long portray this aspect of his life gives the audience what it deserves. We see Logan’s story come full circle, and yeah we can mock Orgins and we can mock X3 but somehow they make the character that we see in Logan better. Believable. They add to the brokenness. They add to the hopes of redemption. Much like anyone’s life, we are defined by the highs and the lows and Logan doesn’t ignore any of that. It celebrates it.

What makes Logan so freakin’ good is how unafraid it is. There are a large number of scenes where Logan is completely unlikable and you don’t expect that from your title character. Charles Xavier, the patriarch of the X-Men movie franchise, is stripped so far down that it’s heart breaking to see him (just real quick, Patrick Stewart is phenomenal here). He’s old and he’s dying and instead of that being sugar coated it’s raw and it’s real and it’s sad. Laura represents a future and the hope of redemption, but it’s not easily accessible. The family dynamic looms large but it doesn’t negate the things that have happened in the past. It doesn’t erase the pain and even in the happiness, Logan has a difficult time accepting it could be for him. So many movies want to provide this happy ending to the heroes and in a lot of ways this happiness makes Logan feel even worse because to him it’s undeserved.

The themes of escaping your past or finding some sort of redemption lead to grey answers. Can it be done? Sure. What’s the cost? Is it worth it? Will it even matter? Do I deserve it? These are some deep philosophical questions that Logan doesn’t shy away from, and it’s that willingness to ask these questions in the first place that make it such a great movie. Make no mistake about it, Logan is a tremendous movie. I mean movie movie. Take away the fact that Wolverine is a super hero, if you went into Logan without that knowledge you’d still walk out saying that film was excellent. For us geeks, the fact that Logan can be a movie of substance and heavy thematic issues validates our love in the property. It serves justice to us because it shows that our comic book heroes can actual say something. That the stories they tell can exceed the battle of good vs evil. That comic book movies can ask some pretty big questions and leave you a bag of feels when the credits roll.

I cried at the end of Logan. I have no problem admitting that what so ever. Throughout the film there were a number of things that I could relate to that made this film resonate. Logan’s relationship with Charles reminded me of my father when he got sick, not in a make me depressed way, but in the way that I knew what they were going through. I understood it. The frustration and the sadness. Logan’s feelings of not belonging and being lost, I totally got that too. I’ve been there trying to re-find myself and wondering if everything is going to be shitty forever (it’s not things do get better). I saw Laura as the representation of a brighter future and I felt Logan’s questioning of whether he deserved it or not. I understood this movie probably better then most super hero movies because it was willing to tackle emotions that I’ve experienced and I’ve felt throughout my life. It was unafraid to shy away from the realness of those emotions. Because of that, I cried when the film ended. I think that’s what it wanted. Logan wanted us to feel. Something. Anything. Everything. On that level it succeeded.

The debate will start soon, in fact it’s started already, whether Logan is the greatest super hero movie ever or is it The Dark Knight? That’s a question for message boards or drunk discussions with your friends, and they’ll be fun. For now, I want to skip over that topic and just celebrate the movie. Logan is pretty spectacular. I haven’t been able to stop thinking about it since I saw it four days ago, and that’s the power of excellent story telling. Like I said, Logan is the Wolverine movie we deserve, and the super hero movie we need right now. And for that we should be grateful.

7 thoughts on “Logan and the Feels”