Do you ever feel that television networks just don’t care about your feels? I think we’ve all been there. For me, personally, I think NBC can give two shits about my television needs. I know that’s super aggressive but it’s true. They cancelled Hannibal right before Bryan Fuller got to explore the Silence of the Lambs story line, and they cancelled Community the day after my father passed. I’m not disillusioned enough to say that NBC purposely seeked me out and cancelled Community because my father had died, that would make me a crazy person. I will say it felt that they were just adding to the pile of things that sucked super bad at that moment. You couldn’t just renew it for the fabled sixth season? Or wait a week before you canceled it? I mean, it was a day.

The rational way of thinking in situations like this is the network could no longer justify airing these programs. Both suffered from less than great ratings, it didn’t help that NBC gave them super crappy time slots with no lead ins, and we’re a bit too artsy for the simplistic minds at the network. I am I being too hard here? No! Of course I blame NBC! They haven’t understood what makes good television since the late 90’s. Yet we the fans have to be punished for all the millions of people who don’t watch. Naturally this is our fault so let’s punish the fans.

I hear you Firefly fans, I do. How could I forget you?

There is just something about critically acclaimed programming getting cancelled that seems like a slap in the face. I get it, ratings are king, but wouldn’t you want a show that gets tons of positive buzz and critical acclaim so your network isn’t considered a joke? I digress.

When your particular show gets the ax don’t you feel that the network should contact you personally and apologize? Something that says “we understand that you love this show but we have no choice because we can’t figure out a way to get other people to watch this.” It never happens though. If this was a real life situation break up the network would be in the role of the heart breaker who just ghosts after the relationship ends. No good-bye, no sad letter left behind just a collection of memories, heartache, and things that never were. Thanks for that.

The whole thing is very cold and systematic and we are powerless to stop it from happening. Each year we fall in love with new shows and each year there is a collection of people who have their hearts broken. But television has us so conditioned and trained that even through the pain and the hurt we crawl back looking to fall in love again. But once, just once, I’d love a network to reach out and say “I”m sorry”.

And I think it finally happened. Recently Netflix cancelled Sense8, a show that I had been interested in but hadn’t gotten around to watching yet (I have a very full show plate). I pay attention to the interwebs and social media and saw that there was a pretty loud outcry to this happening and I felt for those people. I know the feeling all to well, but since I wasn’t attached to the show I forgot about it the following day. Life goes on I suppose for the nonfan.

I don’t remember how many days later it was but I was scrolling through my Instagram feed and I saw something from Netflix that looked like a letter and the subject was Sense8. Naturally I read it. 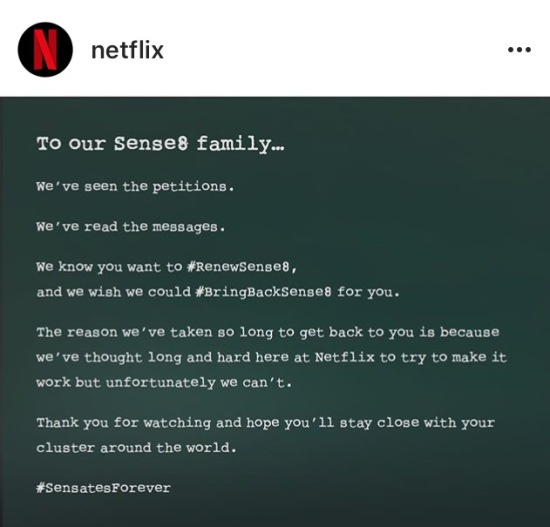 Right?! Did anyone else get the feels here? I don’t even watch the show but this little thing, this little letter, this tiny acknowledgment seemed to vindicate every cancelled show I’ve ever loved. My inner television fan wept over this. Netflix gets it. They get the pain and they wanted us, the fans, to understand that they got it. Super classy move. Does it make the hurt any less? No, but there is a bit of a comfort in knowing that the network acknowledged you. Sometimes little things like that go a long way to maintaining a fan base or appeasing them. Just think how many suicide pacts could have been prevented if they just issued an apology letter for cancelling Firefly.

I applaud you Netflix. Thank you on behalf of anyone who has had a show ripped out of their lives.

NBC, I’ll be patiently waiting for my loooooooooong over due Community and Hannibal letters.

2 thoughts on “When Networks Apologize”