Geeeeeeeeeeeeeeklings, what is going on?! I know I took a bit of an extended vacation last week from my first job and the site and I’m sorry. I always feel guilty when I don’t write a whole bunch but sometimes you just need to fuel those creative fires and just get your head on straight. I have tons of content planned for you this week as I hope to make a big push into the last half of the year. With that being said though, how is everyone? Did you guys have a good week? I sure as hell did. I got a whole lot of R&R in and caught up on a bunch of comic books, and now getting ready to face the work week. Ugh, after ten days off it’ll be difficult having to join the working force again tomorrow morning. But that’s tomorrow Kevin’s problem. We still got tonight.

For those of you who are wondering how New York Comic Con went, well, the short answer is awesome. The long answer will be here tomorrow, or maybe Wednesday depending on the events of tonight (you’ll see soon), and I’ve got plenty to discuss. The sister and I went to back to back days and we really got the most out of our con this year so I’ve got tons of things to report. With New York Comic Con comes a whole bunch of news scoops and there are a few of them that have even worked their way into our Week In Geek. In fact, this was a tough one because there is a ton of things going on. Almost enough to warrant two Week In Geek columns. Let’s just focus on the one though, shall we? 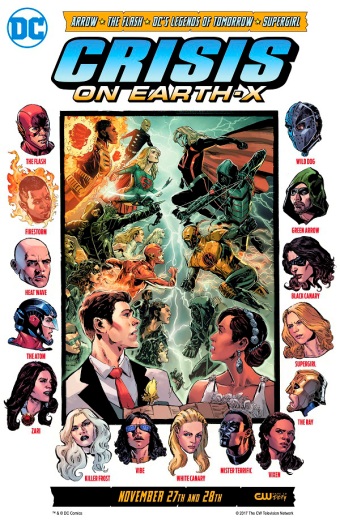 1. The Return of Arrowverse- I easily could have listed each of these shows as a separate item this week but like I said there is a ton of news to tackle. Television season really kicks off for yours truly this week as shows like The Flash, Supergirl, Arrow, and Legends of Tomorrow all return to my DVR. I for one can’t wait as I’ve been sorely missing my weekly dose of superhero television. Not to mention the cliffhangers last season were all pretty epic. Brace yourself cause I’m about to give some quick SPOILERS, Barry left and became one with the Speed Force, looks like everyone could be dead on Arrow, the Legends brought dinosaurs to L.A., and I don’t watch Supergirl but I’m sure something happened there too. I am very much looking forward to seeing what these new seasons have in store for us as we start to build to this year’s badass crossover, Crisis on Earth X.

2. New Justice League trailer- This one didn’t come out of NYCC, I don’t think, but it did arrive Sunday so I suppose we could sort of shoehorn it in there. A brand-spankin’ new Justice League trailer arrived early Sunday morning and I have to say, against my better judgment, that this thing is starting to look pretty good. I’m still not sold on Ezra Miller as the Flash (#notmyflash) or Cyborg but the tone of the movie has shifted a bit in the last couple of trailers. There is no denying that Wonder Woman was hands down the first really successful movie of the DC Cinematic Universe and I’m happy to see that DC is now centering these last couple of Justice League trailers around her. The first trailer seemed to go “all in” on Batman (see what I did there?) but now with Joss Whedon taking over the reshoots it seems that Justice League could be shifting towards something a little more hopeful. That has been one of the key complaints of the DC universe since it began with Man of Steel, things being entirely too dark, and it looks like Whedon is the man who could maybe save this sinking ship. Like I said, I’ve been betrayed by DC movies before (*cough* Suicide Squad *cough*) but I’m willing to be hopeful. Wonder Woman is the key to DC’s success and this movie should go out of its way to showcase just how important she is. If the other heroes could feed off that then maybe we’ll have a new hope for DC movies going into Aquaman and Flash: Flashpoint. One can hope.

3. Star Wars: The Last Jedi trailer- It seems like it has been a very, very long time since we’ve had a glimpse of Episode VII and the Gods have heard our pleas. Tonight during halftime of the Monday Night Football game, Disney will finally be unveiling the new Last Jedi trailer and I’m all types of giddy. Maybe some of that has to do with meeting Luke Skywalker himself at NYCC Saturday (more on that later this week) or maybe it’s just because I love Star Wars, but I think it’s about time that we got a bigger picture of what to expect here. Who exactly is the last Jedi (it’s Luke)? What are porgs and how do I get one? Who is Benicio del Toro playing? What is going to be the moment that makes me shout out loud at my television like a giddy child? All of these questions should be addressed tonight. December will be here before we know it and after tonight we’re going to have a better understanding of the tone of Episode VIII. But be careful Geeklings, I hear that the trailer will tackle some serious plot points so if you don’t want to know anything then maybe it’s best you stay away. Just throwing it out there.

4. Mr. Robot season 3- Continuing the trend of awesome television shows returning to our screens this week, I give you season three of Mr. Robot. If you’ve been feeling like your fiction hasn’t been introducing enough paranoia into your life then it’s a good thing that Mr. Robot has returned. This season looks to deal with revolution and after the extremely strong finish to season two, I for one can’t wait to see what happens between F Society, the Dark Army, and Evil Corp. This is one of television’s most intelligent, excellently acted, layered shows and you need to get on this. I promise you won’t regret it. Plus you can go to Fan Fest and read my episode reviews. It’s a win-win people!

5. X-Files season 11 trailer- This one came directly out of NYCC yesterday (Sunday) and it was an exciting way to end the weekend. If you recall I was a pretty big fan of the return of the X-Files even though I felt the mythology episodes were the weakest ones of the revival. And while the trailer seems to be mythology-heavy, it’s still exciting to see Mulder and Scully back at it. This new season will get ten episodes and will most likely be Gillian Anderson’s last, but it will hopefully tickle that nostalgia button while also bringing us some crazy ass sci-fic. Maybe even some closure…