It’s been over a year since Batman removed the Comedian’s button from the walls of the Batcave. Over a year since I read Rebirth #1 in my apartment, my Fortress of Nerditude, and geeked out hard as the events of Rebirth unfolded across my eyeholes. I’ve said it a number of times before but Rebirth #1 might be the best single issue of a comic I’ve read in quite some time. It was spellbinding and refreshing and helped usher in a new era for DC comics. An era that was geared towards rewarding the fan base while not pissing off the new readers that were drawn by the New 52. Instead of acting like those events had never happened, Geoff Johns instead embraced them and gave us a reason why years worth of continuity, certain characters, and relationships were no longer apart of the DCU. That reason…The Watchmen’s Doctor Manhattan.

This was a reveal that could have gone a number of ways for DC and Johns. I’m not recreating the wheel when I say The Watchmen is arguably the pinnacle of comic books. The holy grail. It not only transformed and inspired more writers than I could name but changed the landscape of how the public viewed superheroes. Watchmen was gritty and dirty and brutal and unapologetic, openly displaying the best and worst characteristics of what superheroes could be. Yes, the characters of Watchmen were sort of extreme mirror images of DC heroes; it would be hard to not see the similarities between Batman and Rorschach for example. The Watchmen was a story where Alan Moore spoke out about the constructs of the DC heroes pointing out their strengths and flaws. Yet, these DC heroes have never been given the opportunity to rebut these views or portrayals… until now that is.

Doomsday Clock aims to be that rebuttal. I’ve been looking forward to this book since the end of Rebirth. I’ve been looking forward to this book since Doctor Manhattan’s hand picked up the Comedian’s button at the end of “The Button” crossover between Batman and the Flash. The risk seemed great but the reward could be even greater, so when I sat down in my chair early Wednesday morning to read the first issue I was filled with an anticipation and excitement I haven’t felt for a book in a while. At NYCC I had already seen the first six pages of the story and had them explained by Geoff Johns himself in one of my favorite aspects of the entire con, which kind of gave me a bit of a headstart on what to expect. To a point. Those six pages were just an appetizer to the greater story looking to be told within these pages. 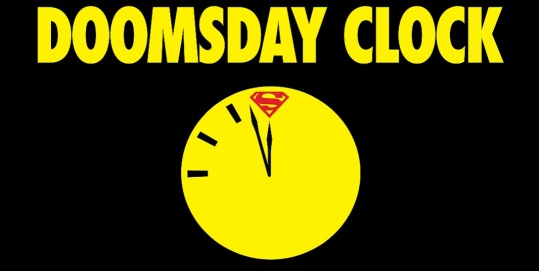 I can honestly say, having read the issue twice now, that Doomsday Clock feels like the most important comic of 2017. Those of you who know me from my Pull List columns or follow me on Twitter (@iamgeek32)  know that I read a great deal of comic books, so I don’t say this lightly. Doomsday Clock is The Watchmen sequel we didn’t know we wanted or thought was possible, but it’s so much more. It’s something new. It’s something bold. It’s masterful storytelling.

Right off the bat, you can tell that Johns and artist Gary Frank have captured the tone of Alan Moore’s saga. The depth of narrative and art makes you feel like you’ve been transported back to this universe without missing a beat. This opening issue takes place mostly in the world of The Watchmen seven years after the attack on New York as the world begins to fall apart again. I’m not going to get into direct spoilers because where’s the fun in that, but Doomsday Clock touches on some lingering questions left by Alan Moore’s classic and opens up a number of questions that have most likely lingering in the back of your mind since you last read.

With Doomsday Clock we are reacquainted with old characters, possibly old characters (?), and introduced to new characters who instantly feel at home in this universe. The Mime and his wife give off a Joker and Harley Quinn type vibe, but it’s the Mime who hands down steals the show. Here is a villain who seems every bit psychotic and chews up his scenery effortlessly, and I’m just itching to know more of his backstory and how his arrival fits the plans of this narrative. For those of you wondering how this story could include Rorschach if this takes place seven years after Watchmen, your question has merit. I’m not going to lie to you and say you get your answer in this book, but you do get the understanding that there is a larger mystery at work.

God is missing from the Watchmen universe, he left back in the 80’s when he was accused of causing cancer. Where is Doctor Manhattan now? What has he been up to? We know from Wally West that he’s been manipulating time within the DC universe, but why? Would he be willing to return to the Watchmen universe or is he having too much fun messing with the DCU? Where does Superman fit into all of this? These are not answers you’ll get in this book, but you don’t want them now anyway. You want Johns and Frank to take their time, and they will with the series being twelve issues, and unfold this story with the importance that it deserves. Doomsday Clock lives up to every ounce of hype and leaves you yearning for more. There is more being told here than just a superhero story. Doomsday Clock is a reflection of the times and a way for the DC heroes to take the narrative back. To look at Alan Moore’s creations and see the darkness within that universe and possibly answer back with hope and light. To show us and them that they’re something more.