Geeklings, as you recall yesterday at the start of our “Best of 2017” list I said I would return here today to break down my favorite movies of the year. And that was the full intention. I’ve got a list that I’ve been playing and to be honest I still don’t feel like I’ve got it quite right, but that’s not the reason we’re not talking about movies today. I woke up this morning to go to the gym for the first time in forever, you bet that’s a humble brag and it’s too cold to be walking in the mornings, and returned home to read some new comics. It’s New Comic Book Day after all which got me thinking, today is the perfect day to celebrate the best comics of the year. Soooooo, I called an audible and decided to tackle my favorite comics of the year today instead.

Now I know that some of you don’t read comics…yet, and that’s okay. Maybe this list will get you interested. Maybe you just like reading about comics and want to know all the latest happenings. Or maybe you’re just an I Am Geek junkie and read anything I put up here, in which case, thank you big big. Either way, there are comics to be discussed, my friends.

Now you will notice that there are some major books left off the list and it’s not because I didn’t like them. For starters, Doomsday Clock, which just put out its second issue today, didn’t have enough issues to make it one of the best of the year. That’s not denying the brilliance of this series though and I suspect it has a legit shot at making the list next year. Other books like Mister Miracle didn’t make the list because I’m insanely behind on them. I’ve read the first two issues and love what Tom King is doing but need to read the other issues before I could put it on the list. Didn’t want to throw it up here because it was expected to be here. That’s not fair to the other books I have been reading.

As I mentioned in my Thor Ragnarok/Justice League review, I’ve been kind of disappointed in Marvel this year, especially with how terribly they botched Secret Empire. Man, those last few books still tick me off as there was so much promise there to do something bold. There was no The Vision coming out of the company this year but that’s not to say there weren’t good books from the House of Ideas.

All and all 2017 was a tremendous comic year for me. I read a shit ton. That’s an actual form of measurement. If it wasn’t for Amazon or Comixology’s mega sales I’d be broke right now, but being able to steal graphic novels and single issues dirt cheap is one of the most gratifying purchases I make on a week to week basis.

Alright, enough talk. Let’s do this. Here are my favorite comic books of 2017.

5. Paper Girls by Brian K Vaughn- I started reading Paper Girls when it was first released and then kind of let it fall by the wayside. Most likely because I had a super full pull list and was worried about breaking the bank. In the late stages of 2017, I got over this way of thinking and binge read the hell out of this series. Vaughn has long been my favorite comic book writer (read Y the Last Man and Saga if you need to know why) and Paper Girls just helps to further cement why. Taking place on Halloween in the 1980’s, Paper Girls is a classic coming of age story of four paper girls (hence the title) who have to deal with the common problems of time travel, warring factions over the control of time, meeting their older selves, learning their futures, all while trying to survive and make some sense of it all. One of the most beautiful aspects of Paper Girls, besides Cliff Chiang’s artwork, is how these girls are thrust into this crazy situation without a clue to what is going on and we have to adapt with them. Everything we learn we learn with them and it helps keep us all on the same page. The character development is rich, the 80’s nostalgia is real, the humor is sharp, the ideas are huge, and this might be the closest thing you can get to Stranger Things in a comic. Old time travel themes seem renewed as our characters learn whether the future is set in stone while learning who they are. 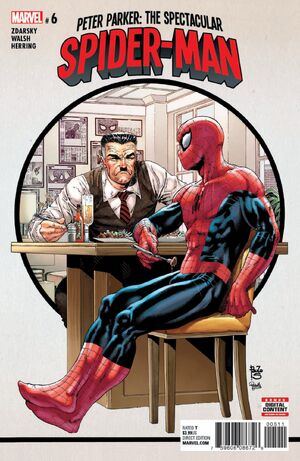 4. Peter Parker: The Spectacular Spider-Man by Chip Zdarsky– My dislike of Dan Slott’s Amazing Spider-Man run has been well documented, and it’s that dislike that lead me to Chip Zdarsky’s Peter Parker: The Spectacular Spider-Man. I was searching for a Spider-Man comic that reminded me of why I fell in love with the character. A book that wasn’t changing the status quo every six issues and didn’t stray from the essence of Spider-Man. Zdarsky’s book does just that. Here is a book rooted in the essential feels of old web head. The humor is tight and at times laugh out loud funny, the story is large and ambitious but never loses sight of the New York setting and what makes Spidey thrive, Peter Parker is not a billionaire Tony Stark type but the down on his luck ever man that I’ve always related to, and the book is fun. From start to finish it’s some of the most fun I have reading a comic every month. On top of that issue six provides a huge moment in Spider-Man history that is delivered with care and respect to the legacy of the characters involved. If you’re looking for a Spider-Man book that’s as fun as Homecoming then look no further.

3. Dark Nights Metal by Scott Snyder– I’m not going to lie, after Secret Empire, I was a little weary on another big comic event but luckily Scott Snyder and Greg Capullo’s Dark Nights Metal has totally changed my mind. This is one bombastic, kickass event comic that not only aims to bring closure to Synder’s Batman run but also to some of the larger looming mysteries of the DC universe. We are provided some pretty gnarly villains in the evil Batmen from the Dark Multiverse, I dare you not to fall in love with the Batman Who Laughs, but we’re also given a story that shows that these DC heroes are at their best when working together. No one needs to learn that more than Batman who has some serious trust issues. The event has allowed for some great tie-in issues as well as we learn the histories of these evil Batmen (personal favorites are Red Death, The Merciless, and The Devastator) or books like Gotham Resistance that puts the spotlight on some other characters like Robin, Green Arrow, Harley Quinn, and Nightwing opposed to the major players. Dark Nights Metal is rock n’ roll in comic form and is everything I want out of an event comic. Major revelations and change on the horizon, tons of easter eggs and mythology expansion, and fun. Lots and lots of fun.

2. The Defenders by Brian Michael Bendis- I love, love, love this book. So much. If the Netflix series got you pumped for these heroes then Bendis’s comic takes those feelings and cranks them up to eleven. My favorite aspect of this series is how it kind of ties together a majority of Bendis’s other books and kind of creates this street-level pocket universe for Marvel. Events from Jessica Jones, Miles Morales Spider-Man, and even Invincible Iron Man have all bled into The Defenders adding levels of importance to this area of the Marvel Universe. Bendis’s love for these characters shines in every panel through crisp dialogue, action, and the use of their rich histories. Marquez’s art is on a whole other level, as many issues can sometimes have pages without dialogue, and his fight sequences are gorgeous and vivid. The Defenders is a street level, gritty book that isn’t afraid to have fun. There is plenty of humor to be found on these pages, especially when Deadpool comes to visit, but the best part of The Defenders is how it reads like a love letter for Daredevil, Luke Cage, Iron Fist, and Jessica Jones. Bendis is responsible for putting most of these characters on the map or back on the map, and with his departure rapidly approaching, he’s saying goodbye to them in the most glorious way possible. One epic story for the soul of New York. Also, the Punisher is here. 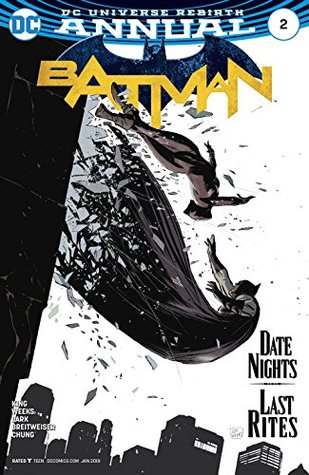 1. Batman by Tom King- Holy crap, this book you guys. I had my doubts when Scott Snyder left the series as I thought his run was epic and some of the best Batman we had seen in some time. Then Tom King comes along and just blows me out the water. Issue after issue after issue, Batman just melts my face. King has put Batman through a lot this year, a war between the Joker and Riddler which provided an ending that changes Batman’s mythology and left me stunned. We’ve also seen Bats pop the question. That’s right, Batman and Catwoman are set to get married and it’s their relationship that has driven these issues for the back half of the year. It’s King’s characterization that drives this book as he really gets the essence of both Bruce and Batman. How one can’t exist without the other but how the line between the two can be blurred. Not to be forgotten is the amazing job he’s done with Catwoman and making the relationship between the two not only real but essential. It’s hard to picture Batman without Catwoman now, and while it seems King is setting us up for some type of extreme heartbreak, I can’t help but allow myself to be suckered in. This book can go from crazy dark to light-hearted and moving (just look at issues 36 and 37 that perfectly sum up the relationship between Superman and Batman), within a blink of an eye. Tom King is a master storyteller and his Batman run is some of his finest writing. There is no other book on the shelves that is as enthralling or magical as Batman. It is a must-read for anyone who has ever loved the Caped Crusader or comics in general. Hell, it’s a must read if you love amazing storytelling. King has a vision, pun sort of intended, and watching it unfold is a work of art.

And there you have it Geeklings. These are my top five comic books of the year. What do you think? Do they match up with what you’re reading? Sound off in the comments below or you can find me on Twitter @iamgeek32 to discuss what you think should have been on the list. Remember though, these are the best of the books I’ve been reading so I’m well aware that there are tons of gems I haven’t gotten to… yet.

Be sure to join us again tomorrow as our best of 2017 continues.