Geekling, what is going?! A very happy Monday to you all. I hope you all had quite the lovely holiday weekends and are now getting back into that work routine. I really don’t wish that for you. The work routine is the worst part of a Monday. Actually, the worst part of a Monday is seeing that your fantasy football team, which is ranked second in the league, lost by thirteen points because one of your wide receivers was an idiot and got ejected from the game for starting a fight. Like the guy was dumb enough to throw a punch at a player wearing a helmet. Good thinking you dunce! Getting ejected wasn’t enough but let’s try and break your hand before the playoffs start. Smart. Then mix that in with the work routine and Monday was just ducky.

But this Monday wasn’t all bad, there are a number of things to get excited about. As a matter of fact, I spent most of my free time on Twitter (@iamgeek32) or the interwebs researching some of this weeks Week In Geek items because I was all types of pumped for them. I think that should be a nice lead into our actual list. 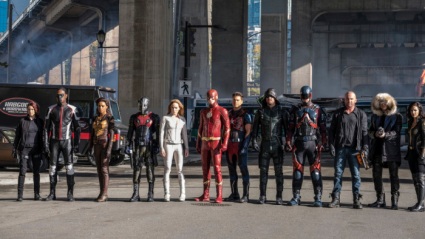 1. Crisis on Earth X– Ever since The Flash started on the CW the Arrowverse crossovers have been one of my favorite aspects of the season. I have loved how each year these crossovers have gotten bigger and better. Last years “Heroes vs Aliens” is thus far my favorite, but I’m having some pretty insanely high hopes for this year’s Crisis On Earth X. Why you ask? Well, I’m a sucker for any time we can get evil versions of our heroes. I feel it allows the actors to have some fun with characters they’ve been living in for years. Plus their costumes look dope as well. I’m really hoping there’s a pop vinyl line of these Earth X Arrow, Flash, and Supergirl because they need to be on my shelf. I’m also hoping that this crossover can add some life to a season that has been subpar at best. Arrow has been “eh” and you already know how I feel about The Flash. Here’s hoping this crossover jumps starts the next 3/4 of the season into high gear.

Most of all, I’m really looking forward to the team up aspect of the event. We watch these individual superhero movies like the Thors and Captain Americas not just because they’re awesome but because they’re leading to something larger. The team up. Everyone loves a superhero team up and giving us four episodes of ass kickery should scratch that itch. I’m almost willing to say that these next four episodes will be better than the Justice League. I actually feel pretty confident in this.

Don’t forget the easter eggs. Last season we saw a tease of Hall of Justice. Could this year’s crossover make it a reality? Lots of potentials and I’m geeking out with excitement.

2. Avengers Infinity War hype- This morning I woke up, checked my fantasy football score only to be filled with anger, and went on Facebook. There at the top of my feed was a green number “3” from the Russo Brothers. And that green number “3” changed the entire outlook of my day. Suddenly all my Marvel frustration that I had mentioned yesterday seemed to just vanish. Poof. Just like that. All I could think of was the possibility that we. Could. Be. Getting. An. Avengers. Infinity War. Trailer. This week!

The Russo Brothers have been known to troll the fan base a little bit, and it’s all in good fun, but there is something about this green “3” that seems… legit. Does it mean three days? Does it mean December 3rd? Does it just mean Avengers 3?! I don’t have a freaking clue but I have been all over Twitter and Facebook chatting with peeps on theories. To further help the hype, Vanity Fair just released a slew of Marvel-themed magazine covers and one has to believe that the time of this article and the Russo Brothers’s “3” cannot be coincidental. Right?!

Some people think the trailer will be dropping during the premiere of Agents of S.H.I.E.L.D on Friday. Another interweb source said December 4th which I thought was odd because it had nothing to do with “3”. While the rest of us are constantly checking our social media feeds waiting to see if it pops up.

I will say this also, cause you won’t find the links here (sorryish), if you search Twitter hard enough you maaaaaaaaay be able to find some leaked footage. Maybe. I can neither confirm nor deny that this possible leaked footage involves the Guardians of the Galaxy and possibly Thanos. I can’t confirm that. You might just have to do some searching on your own. In the meantime… when do you guys think this thing is dropping? Has to be soon, right?!

[Side Note- Head over to Twitter and vote in my current poll. Who’s going to die in during this thing?]

3. A Quiet Place trailer– This trailer actually came out a week or two ago and I put it up on the Facebook page, but I’ve watched it a couple of times and I have to tell you Geeklings… this thing looks really awesome. While the trailer doesn’t give away a lot of plot it does give away enough to make it seem like a badass horror movie. If this is a concept movie, where the majority of the film is silent because the characters are trying not to get dead, I’m going to be thrilled. Horror is definitely a type of genre that lends itself to unique storytelling and if it can creep me out it’s a win win situation. Plus this thing has Emily Blunt and John Krasinski. What more could you want?

There you have it Geeklings, these are the top items for our week. What do you think? Did I leave anything off? Sound off in the comments below or on the Facebook page. If you’d like to talk anything geeky you can hit me up on Twitter to chat. I always respond. See you all tomorrow! Maybe we’ll have an Avengers Infinity War trailer… maybe.