Rick and Morty are no strangers to pop culture easter eggs. This is a show that has thrived on throwing little details in the background of episodes for fans to harvest and ponder what the deeper meaning is. If there’s one at all. Sometimes I believe that Justin Roiland, Dan Harmon, and the rest of the Rick and Morty crew throw things into the background just to mess with their viewers. Hell, it certainly seems that all of season four has been a way of messing with viewers and their expectations. You want more streamlined connected canon storytelling, well we’re going to give you the random Rick and Morty adventures you complained about not getting in season three. Fine, we’ll give you an episode that provides some canon storytelling and hanging plot threads buuuuut we’re going to use this episode to fully mock you for wanting these things in the first place. And we’re going to put it all on a train because, yay trains? Also, we’re going to imply that maybe none of that every happened because again, trains.

From the very start, Rick and Morty have planted some of the best easter eggs on television in their episodes like Sandman, Back to the Future, and even SDCC’s famous Hall H. That trend continued this week with the darkest, and best, episode of this current season. “The Vat of Acid Episode” was Rick and Morty firing on all cylinders, telling a story that seemed to be going one way only to yank the rug out from under us and subvert our expectations… and our emotions. “The Vat of Acid Episode” is brutally dark and further proves the point that Rick Sanchez is the worst. The literal worst. We got glimpses of that earlier this season during the “One Crew Over the Crewcoo’s Morty” heist episode where we learn that Rick’s entire plan for a heist centered on crushing Morty’s dreams of working for Netflix because he didn’t want to lose him. This a man who is reaching Walter White levels of unredeemable. Is there much of a difference between poisoning a child to manipulate your meth-cooking partner into helping you kill your boss and creating a button that seemingly pauses time so you can have restarts like in a video game but taps into the multiverse killing unsuspecting Mortys just to prove a point? It’s a very thin line and probably makes a lot of sense that Rick used to live in Walter White’s house. 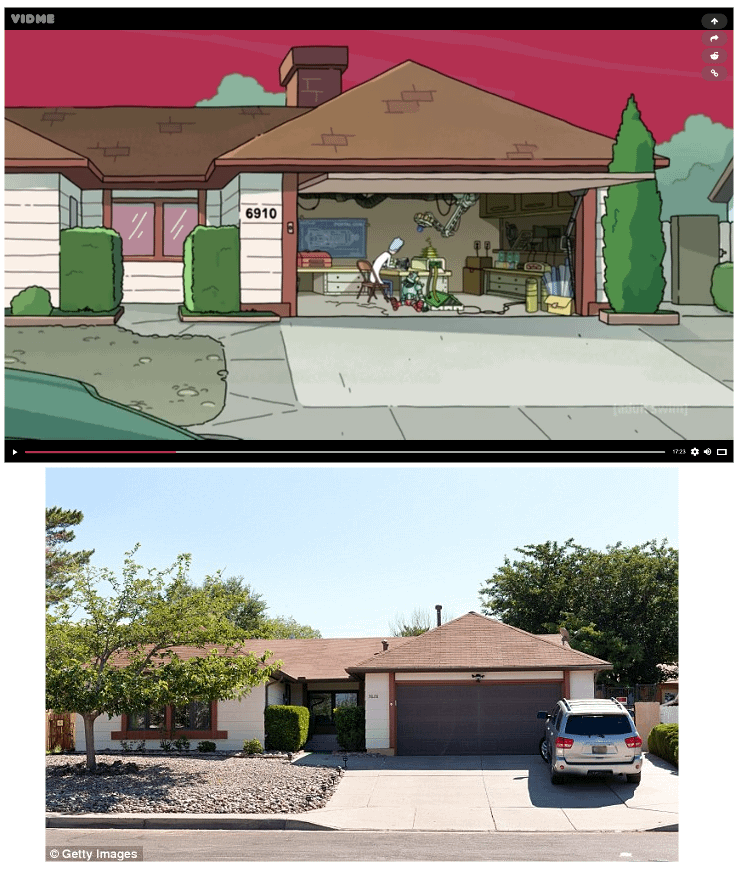 That’s right! The season three premiere, “The Rickshank Rickdemption”, showed us that Rick lived in the White’s house. Or at least he manipulated a simulation to make us believe that he did. There’s a lot in that episode that deserves deep exploration and the Walter White house is one of them. But it just re-emphises the point that Rick and Morty have some of the best easter eggs out there. And while “The Vat of Acid Episode” had easter eggs for Teenage Mutant Ninja Turtles (ooze on the shelf) and a masterful yet heartbreaking homage to Alive, there was one pop culture location that snuck itself into the background that had me pointing at my television screen and going “Hey! I know that place!”.

During Morty’s montage of doing things badly and then restarting them again to do them correctly, he finds an old man in a wheelchair waiting to cross the road. Morty’s first instinct, because he can with the reset button Rick gave him, is to push the old man out of his wheelchair and then ride away in it. Morty quickly reverses his actions, making them as if they never happened,  and wheels the old man safely across the street. This sequence is funny in a perverse kind of way but it’s what’s in the background that makes it so interesting.

If you just pointed at your screen while saying “Hey! I know that place!” then we’ve got a lot in common because that is clearly Moe’s Tavern from The Simpsons in the background of the scene. This is not the first time that Rick and Morty have dealt with The Simpsons as there was that Simpson’s cold open a few years ago that saw Rick and Morty crash into the couch making goo of the most famous family in Springville. It was quite a delight seeing Rick wandering around the house of the Simpson’s trying Duff beer, and adding something a little edgier to it, but seeing Moe’s in the background was something else entirely. A fun easter egg that not only acknowledges and pays homage to The Simpsons but might also imply that Rick and Morty, Breaking Bad, and The Simpsons all exist in the same universe? Can you picture Rick, Walter, and Homer all sharing a drink at Moe’s? What the hell would that be like?!

One thing’s for certain, with only a handful of episodes left to this Rick and Morty season,  one can fully expect to have their expectations subverted and to find more fantastic easter eggs along the way. Now, if Rick and Morty could only bump into the Guardians of the Galaxy, I’d love to see those Rocket and Groot interactions.