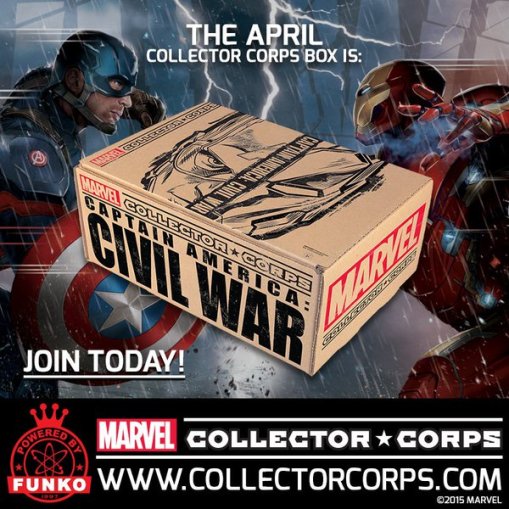 Last year right as the world was getting prepared for the release of the second Avengers movie something wonderful happened. I believe it was around the time the second trailer was released but I hopped on FaceySpace and saw an advertisement for something called the Marvel Collector Corps. I said to myself, what be that? And did a little investigating. By investigating I mean I read the status and looked at the picture, but seriously that was enough for me. I was in.

You see the Marvel Collector Corps is a bi-monthly loot box that is owned by Funko (the same company that makes Pop Vinyls so already you’re seeing the attraction) and consists of nothing but Marvel swag. I had been debating whether or not to get involved in something like this for awhile, but the options were a bit overwhelming. Loot Crate and Nerd Box were a couple of the ones I had been looking at but I was torn. The items in the box were so random that there was a good chance that I’d be paying to get items of things I wasn’t that into. Yeah I’m sure a couple of cool things would slip through but there was no guarantee that the box would be specifically aimed at me. It seemed like too much of a risk to be spending adult dollars on. 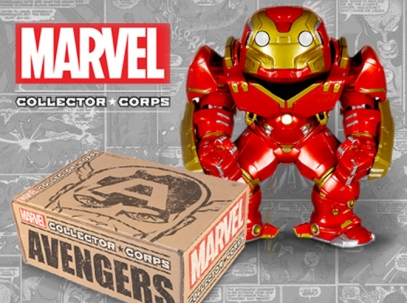 With the Collector Corps that wouldn’t be a problem. I have always been a Marvel kid, even when I was an actual kid. Outside of Batman, Marvel, had the heroes I loved the most. Spider-Man, Captain America, Wolverine, Iron Man, the Punisher, the list went on and on and on. When I got back into comic books it was because of Marvel and the Civil War event. Marvel’s my jaaaaaaam people, and their loot box so desperately wanted to take my money. Who am I to keep it from them? Not to mention that every box would come with an exclusive Pop Vinyl, and to start the series off they were giving away a Hulk Buster from the Avengers movie. I repeat. A. Hulk. Buster. I needed that. I figured if nothing else my $25 (that’s right only $25 people) would be well spent just to get a hold on that thing.

Outside of the exclusive Pops each box contains a t-shirt (as you know I’m a sucker for a t-shirt), a comic with a fun variant cover, pins and patches, as well as more random swag. Since the first Avengers box I have participated in every Collector Corps promotion, outside of the Villains box because of a billing mistake, and have really wracked up some cool stuff. From the Avengers box I got my Hulk Buster, from the Secret Wars box I got Lady Thor and Miles Morales Pops not to mention a great t-shirt with Pop versions of the Avengers, the Guardians of the Galaxy box hooked me up with a dancing Groot scarf and a Star Lord mug, and the Antman box gave me the world’s smallest Pop Vinyl figure and probably my favorite Collector Corps t-shirt (there’s something so simplistic about it).

I received an email today informing me that my February box had shipped, for those curious it’s Deadpool and I’m stoked, and with that they also announced that April’s box would be Civil War themed just in time for the movie! I seriously can’t explain how much I love this promotion. I think it’s not knowing what’s going to be inside the box that’s most exciting. Yes the theme is specific but the items are not so it’s like Christmas morning when I open one up. Considering that it’s every two months there are worse things to spend $25 on. Like crack. Crack would be a way worse purchase.