Geeklings, what is going on? I hope this Monday finds you well. I have to apologize before we jump into this weeks Week In Geek. I wrote a list out today, while I was on lunch (I say this in case my boss thinks I’m slacking off on the job), of the five items to make the list and then I left work but also left the list behind. Now normally this wouldn’t seem like a problem, just rely on your memory Kevin, it’ll be fine. Wrong. I could remember four out of the five but for the life of me I can’t recall what the fifth item was. After a few painstaking hours I have given up trying to recall what it was and just added a new item to the list. What’s the new item you ask? I’m not telling. I have to protect the integrity of the list some.

Now, what do we have in store for this week? Well I’m glad you asked because there are plenty of geeky things to look forward to this week. Like what? Well…

1. Stranger Things Cast Wins SAG Awards and David Harbour’s Outstanding Speech- Last night while I was at my friends house watching the Royal Rumble as a slightly less disgruntled wrestling fan than usual(show was pretty good), actors and actresses alike were winning weird looking naked people trophies over at the SAG Awards. One of those group of actors to win these strange looking trophies was the cast of Stranger Things who won for Best Ensemble Cast in a Drama which in itself was super exciting. I want to say that this is the first major award the show has received and it was all types of adorable watching the kids react. I mean seriously, can I please be friends with these guys?

But that’s not even the best part. Following the win David Harbour, Chief Jim Hopper, was tasked with giving the acceptance speech and what followed were my favorite two and a half minutes of the weekend (yes, I am perfectly aware there is a joke in there but let’s look past it. For now). I try and stay away from politics here at I Am Geek as this isn’t really the forum, but sometimes things can’t be ignored. David Harbour gave an impassioned speech voicing his concerns for the current regime while sending a message filled with love, hope, and and the pursuit of something better. Seriously, I’ve listened to this thing at least five times before going to bed last night and a few more this morning. I want to make it my alarm clock notification. It was the right voice at the absolute right time. I’ve included it below so all of you can give it a hear. Please check out Winona Ryder’s expressions for an added bonus. Yes, there are memes all over the interwebs, but that speech. That speech. 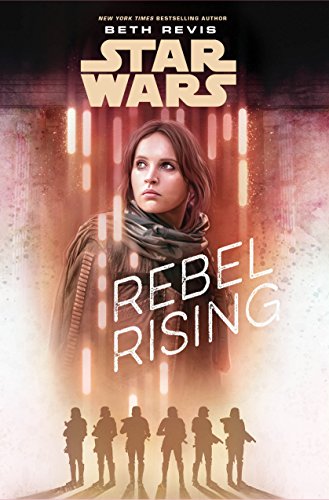 2. Star Wars: Rebel Rising by Beth Revis- The year of Star Wars will continue for Kevin with the release of Star Wars: Rebel Rising in May. My Amazon wishlist is currently filled with Star Wars books and this one seemed like a must. This book  will help fill in the gaps of Jyn Erso’s past and will also be canon (yaaaaaay). My only concern is if this willdiminish any chance of seeing her in a film again. Maybe but I think those odds were rather small to begin with, but she did sign a two film contract and who knows maybe this book will be the setting of a stand alone movie. I believe the story picks up right after the death of her mother and the Empire’s reclaiming of her father. We will get to see her time with Saw Gerrera as we learn more about Jyn’s up bringing, her training and life surrounded by the rebellion, and what separated her and Gerrera. For those of you who fell in love with Jyn Erso, like I did, then this book seems like an easy sell.

3. Super Bowl 51- While the Packers vs the Patriots would have been a sexier match up, it’s almost impossible to ignore the Super Bowl (even with my Giants sitting on the outside). I’ve found the majority of the games through out the playoffs to be less then stellar (championship Sunday was a bust all around) so I’m just hoping for a good game at this point. Is it too much to ask for a little bit of drama? Plus there’s a part of me that would like to see Roger Goodell hand that Super Bowl trophy over to Tom Brady especially after all that Deflate Gate garbage.

4. James McAvoy- Count me as one of the ones who wrote off M Night Shyamalan having seen his last few movies. Let’s just go through the list- Lady In the Water, The Happening, The Last Airbender, and After Earth (where he made Will Smith seem like a bad actor. Seriously, what was that accent?!) were all one giant fart noise. That’s probably putting it a bit mildly too. But Split… Split was pretty solid and a great deal of that has to do with the performance of James McAvoy who is outstanding in the role of Kevin, the man with twenty-seven different personalities. McAvoy manages to be creepy, endearing, naive, scary, intense, brutal, some what adorable, and unique in every one of the characters he portrays and it’s his performance that carries the film and helps it steam roll towards that ending. The whole film was enjoyable and wasn’t too Shyamalaed (it’s a verb now) but McAvoy shined brightest here. I won’t go so far to say that this is the return of M Night Shyamalan but I will say it leaves a trace of hope.

5. Powerless– One of the chief complaints about super hero themed shows or comic book entities is how serious they all seem to be. Well, it appears that Powerless looks to buck that trend when it premiers on Thursday looking at the lighter side of the DC universe (that’s right supposedly there’s a light side). The premise is a group of ordinary people whose job is to clean up the messes left behind by super hero battles. Makes sense, right? I’ve often wondered who is coming in and cleaning that crap up and I guess now we’ll have a little bit of an answer. The fact that this thing stars Alan Tudyk (Firefly, Rogue One) as Bruce Wayne’s cousin and Danny Pudi (of Community) is enough to get me to tune in. I could use a little more serialized comedy in my television rotation any way especially when that show has to do with super heroes. I’m an easy sell.

There you have it Geeklings. What are you guys looking forward to this week? Sound off in the comments below or you can find me on Twitter (@iamgeek32). See you all back here tomorrow!

2 thoughts on “Week In Geek: A Stranger Things Speech, Super Sunday, and Powerless”