Happy New Comic Book Day Geeklings! Or as I like to refer to it as, the best day of the week. As I stated in my Pull List column over at Fan Fest, that you can read here, my pull list was a bit thin today. I wasn’t overly disappointed though because my wallet could sure use the reprieve. There are some weeks where the amount of books add up to something reasonable but at least once a month there’s a bit of a perfect storm where all my books come out at once. This is not my favorite thing to happen. Don’t get me wrong, I love getting comics but I prefer if I didn’t go bankrupt while reading them. Oh, the things we do to keep up our geekdom.

Today is volume four in our continuing Wednesday tradition, it’s been a month now so that makes it a tradition, Today In Awesome Comic Book Images and I decided to go with something a little bit light. Let me tell you a bit about my sister, Jen. She is not the best at comebacks. As a matter of fact her comebacks are bad enough to be considered good. Mostly because we’ve all grown accustomed to them by this point, but they always seem to get a laugh. Maybe that’s the whole point of a comeback, just to get a cheap laugh. If that’s the case then my sister is totally nailing it. Could this be her master plan this whole time? Doubtful but she’s totally going to run with it.

I’m sure you’re wondering just what about her comebacks make them so bad. Well, my sister has a tendency to just repeat the insult that was just slung at her. Usually without hesitation. Example, if you were to tell my sister that she looked a little tired today her immediate response would be “you look a little bit tired today”. There’s no thought given this is just a pure reactionary response. This goes on for everything. Everything. The majority of which don’t even make sense, but that doesn’t stop her. This would be an example of a regular exchange between Jen and I-

Me- Jen would you like to watch Arrow tonight?

It’s actually sort of endearing but don’t tell her I said that because I fear she’ll never stop. It’s actually gotten to the point where the majority of us are now using these comebacks ourselves. I was out with my buddy last week and I spouted one back at him, and he had to reign me in.”You’re pulling a Jen right now”. It’s a thing.

So, with that being said today’s Awesome Comic Book Image is inspired by lovely sister, Jen, and I know for a fact that her favorite I Am Geek posts are the ones where she’s mentioned, which means she’ll be loving this one. Or at least reading it. I hope. Are you here Jen? 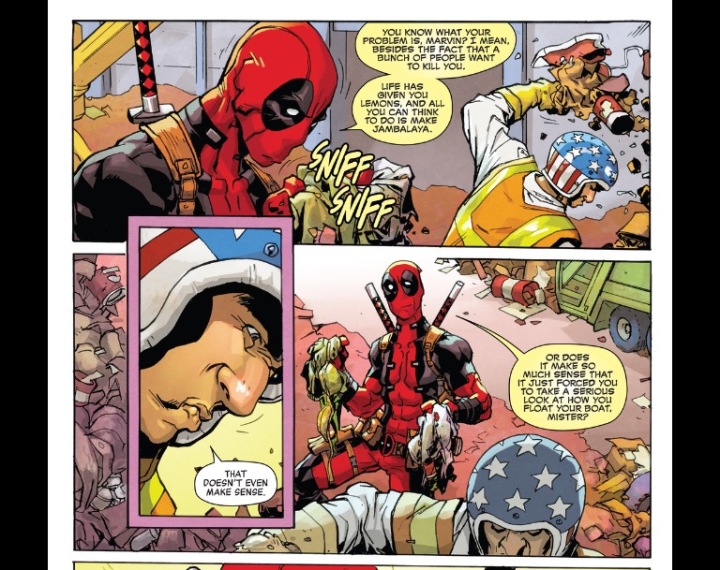 This comes from the Deadpool, Daredevil, Luke Cage, and Iron Fist massive crossover which was released months ago as one mega issue. It was pretty cool getting the entire crossover in one fell swoop instead of having to buy each characters particular book. Plus, it was such an unlikely crossover, the Defenders if Deadpool replaced Jessica Jones, it was hard to pass up. I only read it a couple of weeks ago because I’m seriously backed up on comics. Well, it’s not terrible, I’m starting to catch up. The majority of the books are graphic novels at this point.

When I read this page I immediately thought of my sister and screen captured it so I could send it to her. I’m just about 100% sure she’s said something like this to me at some point or another. I don’t think she enjoyed it as much as I did, her text response was rather short but in her defense she has more important things to take care of, like a tiny little human. But I felt that in this instant Deadpool had totally channeled my sister. It got a cheap laugh out of me, and when you think about it, that’s all that matters.

If you have a favorite comic book image you want to share feel free to tag me in it on Twitter or Instagram (@iamgeek32) or leave one in the comments below (I’m not sure if you can do that actually).