Monday has arrived and with it a new Week In Geek. A new Week In Geek you say? I do say. While I’m not as mentally mushed as I was last week after writing a Game of Thrones review, I am a little pressed for time so I’m just going to jump into this sucker. 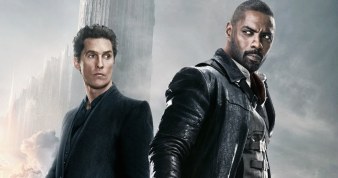 1. The Dark Tower movie– There was a time where I didn’t think I’d ever get to see a Dark Tower movie and I was kind of okay with that. Don’t get me wrong, the prospect of a movie series based on my favorite novels was appealing but it really caused me a great deal of stress. Who would they cast? How badly would this screw this up? Could they possibly do the story justice? Well, it looks like these questions are about to be answered on Friday. I’d be lying if I said I wasn’t excited but I’m also terrified of the movie. I know that it’s not a pure adaptation and more of a sequel to book seven, and the fact that it’s a new Dark Tower story is exciting. It’s been so long since Roland and company have had a new adventure. I think I’m most scared of this movie flopping. I’m also worried that it’ll suck but I’m more concerned with it just missing completely. The plans for this franchise are super ambitious and I’d like to see them continue (I say that now), but I love this story. I love these characters. I just want to see them reach a larger audience because their story is worth the travel. I promise.

2. Mr. Mercedes TV show– The year of Stephen King continues as his detective trilogy looks to get the TV treatment. I really enjoyed the Mr. Mercedes trilogy, the second book was by far my favorite, and think it has the potential to translate well to the small screen. Hell, it’s got to be better than The Mist. Dear God was that terrible. Brendan Gleeson is a terrific casting choice too. The trailer makes it seem all types of good and be sure to look for a Mr. Mercedes easter egg in the Dark Tower movie. See how I connected the first two items? Damn, I’m good.

3. First look at Domino in Deadpool 2– In case you were unaware, production on Deadpool 2 has been in full swing and Ryan Reynolds just leaked our first look at Domino today. Who is Domino? Well, she’s a badass mutant who has the ability to mess with probability as well as being a major ass kicker. She’s all types of awesome and her inclusion in Deadpool 2 along with Cable’s is bringing us ever so close to a X-Force movie. 4. I Am Geek the Podcast– It’s been about a month since we last recorded an episode, and for that, we’re sorry, buuuuuuuut we’re heading back into the lab tomorrow night. Which means a new episode for your earholes either Wednesday or Thursday. Oh, happiest of happy days.