Geeklings, you know I love you guys. From the moment I wake up, before I put on my makeup… sorry, I listened to The Ringer’s Rewatchables podcast recently that covered My Best Friend’s Wedding, that song has been stuck in my head ever since. As I was saying, from the moment I wake up, I’m already starting to plan out my day here at I Am Geek. I make sure I have my memes in order (or polls) and I’m fleshing out the daily column. I’m also writing down ideas for other pieces to write during the week. I Am Geek is a massive part of my day and I love it.

With that being said, I have a dreaded summer cold and I want to curl into a ball and drown in self pity. The Adorable Creature has assured me that I don’t have a fever nor am I dying but at this stage of the game I’m not entirely sure if I can believe her because it feels like both is currently happening. At the same time. I knoooooow, poor me.

So if you guys will excuse me I’m going to kind of jump right into this week’s Week In Geek and then try and get my nose to a place where it doesn’t get chap from too much tissue use. You all know that hell so don’t sit there judging me.

1. True Detective season 3 trailer– Can you name me a show that is searching for redemption more than True Detective? That first season hit like a punch to the face and captivated everyone for eight weeks of summer. Things like time being a flat circle, the Yellow King, and Lone Star beer were all anyone wanted to talk about during that summer and if you weren’t watching you were on the outside. And that tracking shot?!? Dear god that tracking shot. Then season two came along and on paper it seemed like it should have been good. The cast was solid and the content seemed to be dark and brooding. Yes and yes. What followed was a mess of a year with a story that I still haven’t figured out. I think the series was cursed after HBO pushed for it as a Drama series at the Emmy’s opposed to a mini-series. Sorry, no one was beating Breaking Bad that year. Now some time has passed and people wonder if that first season was even as good as we believed it to be (it is), but the time is right for a third installment of the show. The first trailer for season three was released last night and from the looks of things this season has the potential to be trippy. It seems pretty clear that there are going to be multiple different timelines, maybe a ghost, and overall creepiness. Sign me up. I know I shouldn’t have faith in this series but sitting hoping that redemption can be found.

2. Game of Thrones season 8- HBO was busy last night before the season finale of Sharp Objects as the network presented a trailer showcasing a number of their different programs. Including, Game of Thrones, and if you blinked you probably missed some new content for the upcoming eighth and final season of the show. If you’re looking for something to sink your teeth into and get you really hyped for this season then I’m sad to say this is not going to do that. It is going to wet your appettite and bring on the hope that a teaser trailer may not be too far behind. Maybe. One can hope. Although we can safely assume that teaser trailer will get here before Winds of Winter.

3. Tom Clancy’s Jack Ryan- Just in time for a Labor Day binge fest comes Amazon’s Jack Ryan television series starring Jim Halpert himself, John Krasinski. Krasinski has had himself quite the year with the success of A Quiet Place and looks to build off that with the first season of Jack Ryan. Ryan is one of Clancy’s best known characters and has been portrayed by Harrison Ford and Ben Affleck on the big screen. I like the idea of giving the character origin stories and trying to turn him into a Jack Bauer type, and I have faith in Krasinski to pull it off. I think the world is ready for a Jack Ryan resurgence. 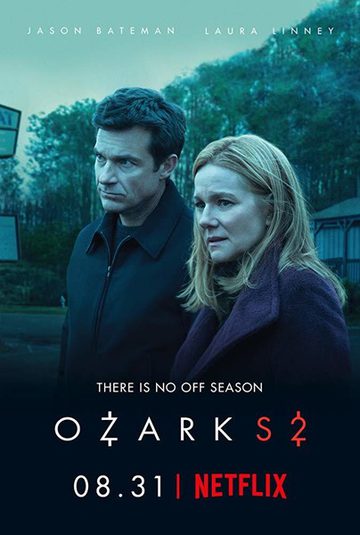 4. Ozark season 2- If you’re looking to really avoid BBQs and Labor Day traffic then the binge gods have smiled upon you my friends. Not only will there be a season of Jack Ryan to binge, but Netflix will also be providing us with the second season of the Ozark. Now, I have not watched this series yet but I do remember the Adorable Creature liking the first four episodes. As discussed in our first The Office column, this is one of the shows she just stopped watching because… that’s what she does. I do know that I enjoy Jason Bateman and after listening to his appearance on the Bill Simmons Podcast my interest levels have increased. Perhaps I can get Alyson to circle back and maybe complete this thing.

There you have it Geeklings, all the best things to get excited about this week. What has you the most pumped? Be sure to sound off in the comments or you can find me on the Twitter @iamgeek32. Now if you’ll excuse me I’m going to try my hardest not to fall asleep before Better Call Saul starts. Pray for my survival Geeklings!  Pray…