Growing up as a kid horror movies were always the thing to watch. For starters, they usually came with that “R” rating and there was just something cool about bragging to your friends that you were allowed to or sneakily watched an “R” rated movie. Came with a degree of street cred. Beyond the scares, that were always invigorating and led to fits of giggles with friends, horror movies were kind of scandalous. There was always a lot of swearing, at least some nudity, and a whole lot of violence. As a kid, these were the movies you needed to watch because they felt important and because they were different. I’m sure if my parents only knew half of the horror movies I was watching in my formative years they would not be happy, but they wouldn’t let me watch The Simpsons. They had to know I would rebel in some degree.

As I’ve gotten older my standards of horror have become pretty high. After a while, you outgrow the jump scares or the pop outs that don’t bring any real substance to the story and are designed to elicit a reaction. Don’t get me wrong, I still enjoy those moments but there has to be more. There needs to be more, and luckily we’re currently living in a horror renaissance of sorts. Films like Get Out, A Quiet Place, Hereditary, and Veronica are finding such large success with horror fans because they’re asking you to invest. Sure, all of these films have your typical jump scares, and they still get reactions, but those reactions are more than just the three seconds it takes before you’re laughing at the silly thing that made you scream. These jump scares register more because you find yourself immersed in the story and the characters running through this trauma.  Suddenly, you’re not recovering in three seconds but finding yourself even more stressed out as you wonder what could possibly happen next to these characters. What else is lying around the corner to ruin their lives? This latest horror revolution is proving that the genre can be more than just popcorn films, but something with substance. 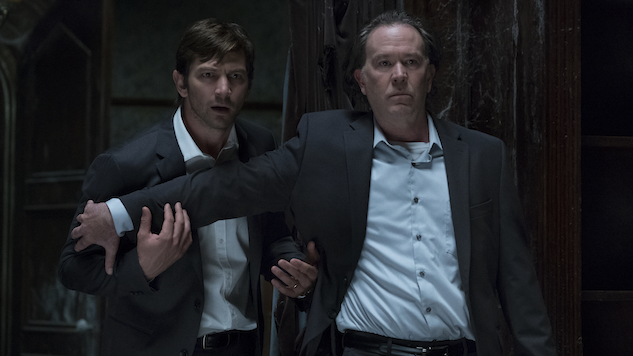 One of the writer/directors leading the charge of this horror revolution is Mike Flanagan whose films Oculus, Hush, and Gerald’s Game have been some of horror’s most refreshing takes as of late. Stories that bring the scares but also bring the character, enhancing the experience. His relationship with Netflix also opens the door to a larger audience who are just looking for something to watch. In fact, it’s that relationship with Netflix that made me so excited for his latest venture, The Haunting of Hill House. Horror has yet to really crossover to television, American Horror Story is entertaining but I wouldn’t exactly describe it as scary. Sorry. If there was anyone who could pull off this transition from big to small screen it would be both Netflix, who is everywhere, and Flanagan, whose stories could only be enhanced by expanding the length of his narrative. Some marriages are just destined for great things and the relationship between Flanagan and Netflix is one of them.

The Haunting of Hill House is a masterpiece in storytelling, character development, and horror. The long form of a television series, even one that’s only ten episodes, allows these characters to breathe, expand, and grow organically. Using a flashback story structure, fluctuating from seeing the main cast as children and adults much like It, enhances everything that comes across the screen. We are invested. We care. Our hearts break with the Crain family across ten hours as their life journeys are just as terrifying as anything that comes out of Hill House, and that’s the beauty of the show. Our emotional attachment to each member of the Crain family takes the horror that befalls them and deepens the impact. Entities like the Bent Neck Lady or Poppy are made that more horrific because they’re attaching themselves to characters we love. The result is horror deeply rooted in emotion and heart.

Hill House resonates emotionally largely due to the chemistry of its cast. Make no mistake about it, this series is a family drama as much as it is a horror show. The show lives and dies on the lives of the Crains and the cast superbly brings these characters to life. For those of us who have a big family, you’ll recognize the little details like side glances or eye rolls that Flanagan and cast put in to make the Crains jump off your screens as they become this living, breathing, broken, dysfunctional family. Living at Hill House comes with a cost, and for some family members that cost is heavier than others. Steven (Michael Huisman), a man who makes a living writing about the ghosts he doesn’t see, turns his sibling’s experiences with the house into a book dividing the family and jump-starting his career.  Sisters Shirley (Elizabeth Reaser) and Theo (Kate Sigel) take different paths as Shirley takes over the family’s vacant matriarch position and Theo somehow becomes an emotionally standoffish character who, due to past events, can feel the emotions of those around her. Literally.  While brother Luke, who shares a twin sister, suffers deeply from his experiences at Hill House leading to a life that quickly spirals out of control with drug use. Hill House takes something from every family member and as we watch the characters try and move on we are reminded through flashbacks what has brought us here. 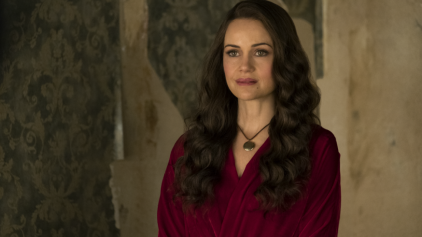 No family drama would be complete without a mystery, a source for the fracturing, and the Crain’s past and present are anchored and interwoven through their mother, Oliva (Carla Gugino), and sister, Nell (Victoria Pedretti). Carla Gugino’s gives a stirring performance as we watch as the house not only corrupts her mindset but tears down the structure of her sanity. Gugino shines and her Olivia is the lynchpin that Hill House thrives off of. On the flipside of that, Pedretti’s Nell is clearly the heartbeat of the show, and while both stories drive the show it’s Nell’s story that brings it all together. The results are heartbreaking, breathtaking, exquisite, and emotionally exhausting. Each episode takes a toll not only on the characters but on the audience as they push through the mysteries and burden themselves with the Crain family’s baggage. We carry their pain with them searching for absolution or a reprieve from the darkness, but Hill House pushes on.

Flanagan takes his time with the narrative and with each passing episode the stakes get higher as the mystery starts to unfold. His camera work enunciates the tension and the terror while also allowing smaller character moments to settle and resonate within the time and space he is given. The use of long tracking shots in “Two Storms” sees the series hit a high as the shots beautifully blend the past and the present and build on the rising tempers and heartbreak. Hands down my favorite episode of the series and one of my favorite episodes of the year. Flanagan appreciates the long form of television and uses it to his, and the stories, advantage. Hill House excels with each passing hour as the story picks up traction and leads us by the hand leaving us powerless from avoiding what happens next.

With Hill House less is more, whether it’s a ghost floating almost unseen in the background or a child’s drawing, the show takes the smallest moment and allows it to add depth to the narrative at hand. The scares are legit, hell, I even screamed out loud at one point, and that’s a testament to how expertly crafted the tension is. Hill House allows us to get swept up in the family drama to the point where we almost forget the terrors lurking in the background, and then punches us when we least expect it. It’s masterful horror and excellent storytelling.

Honestly, I haven’t been this absorbed by a television show since Stranger Things and already can’t wait to re-watch. The Haunting of Hill House is as addictive as it is enthralling. It demands repeat viewings to pick up on the small easter eggs spread wonderfully throughout, like unseen ghosts and props from other Flanagan films. More importantly, Hill House joins the current horror revolution proving that it’s okay for a horror story to ask more of its audience. To allow you to be swept away with the story and its characters while the possibility of terror lurks like the Bent Neck Lady. Just on the outside, barely in your peripherals, and ready to spring at any moment.  Hill House demands your attention but don’t be surprised if you leave changed and more than a tad bit emotional.