It’s funny, the last couple of weeks, maybe even months, there has been a lot to be excited about. Like more than I’ve been able to deal with. Shows like BoJack Horseman, Haunting of Hill House, and Daredevil took over my life individually, there was New York Comic Con that dominated a weekend, Stephen King’s latest book, Elevation, which I’m currently loving, Spider-Man PS4 and now Red Dead Redemption 2, and more comics than I can mention. On the geeky spectrum, my days have all types of busy as I’ve tried to find a balance for everything. No easy task as there just isn’t enough hours in the day. You know, with such trivial things as work getting in the way.

All that has resulted in quite the full plate for yours truly, yet, I find myself wanting more. I guess part of that is my obsessive personality. At this point, I have my hand in so many different pots it’s hard to keep track, but with the help of I Am Geek and Fan Fest I’m able to keep some order. And none of it feels overwhelming either, this is my element. I’m invested in all this so the more things I can get my hands on the better. Give me, give me, give me.

It’s not my fault though! There is just so much to be excited for. Think about it, there are so many things that we’re anticipating that we haven’t even caught a glimpse of yet, and I was reminded of that today. It all started with Entertainment Weekly releasing their latest cover which features are first pictures of Game of Thrones. A little bit of that icky Jon Snow and Daenerys love stuff… 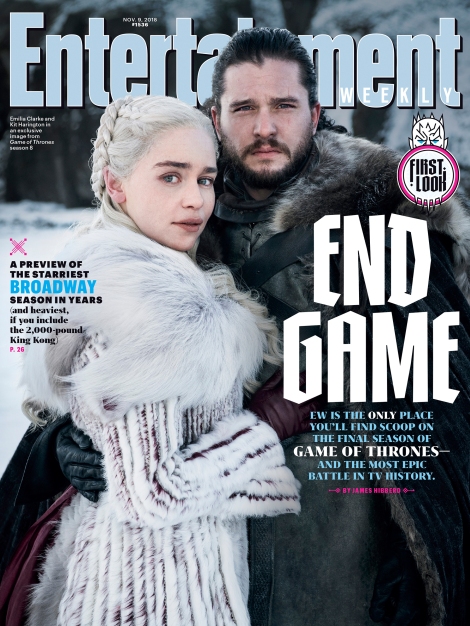 Just seeing this was enough to make me blow up my Twitter and Facebook feeds. If you recall we caught a glimpse of that Captain Marvel cover and we had a trailer a little more than a week later. It was that easy. Entertainment Weekly covers seem to be the herald of trailer drops and if there is one thing I’m looking forward to it’s a Game of Thrones trailer. Hell, I’d be happy with a release date. In most cases, I need that trailer to over analyze over and over and over again, but with this last season of Thrones, I really think that less is more. Just give me a bunch of close-ups of character’s faces, intense music from Ramin Djawadi, a glimpse of the Night King doing something wicked, and close on the Iron Throne. Boom! I’m a happy person with all of that. I’m not a greedy man buuuuuuuut I really want to know when this is dropping next year. I need a glimpse. Winter is here and I want to prep myself. I’m not asking for a lot…. I think.

On top of this, I was reminded that we haven’t seen anything from season three of Stranger Things, who took to social media today to let us know that November 6th will be Stranger Things Day. Which, by the way, I am so here for. A full day to celebrate Stranger Things, that’s an easy sell people. But if you want to make this day even more awesome you best include a trailer and/or a release date because I’m dying over here. The rumors that the show won’t be returning until Summer 2019 is almost too much for my heart to bear. I need to get back to Hawkins as soon as possible. If we can get a trailer and a release date on the sixth, I can at least start prepping myself. Again, I’m not being overly greedy here. Hook a brother up.

Now mix in the fact that we’re supposed to get an Avengers 4 trailer this month, I still haven’t seen anything for Young Justice, there has been very little news on Last of Us 2, Spider-Man Far From Home just wrapped filming, the CW Elseworlds crossover needs a trailer stat, Winds of Winter may one day see the light of day (hahahahaha I’m kidding that book is never coming), HBO’s Watchmen series, and you suddenly realize that there is just a wealth of geekiness to sink your teeth in. It’s almost like Christmas morning every day. What new thing could possibly drop out of nowhere today? It’s the gift that keeps on giving and the reason why I have no time. However, I wouldn’t have it any other way. Would you?

Going to turn it over to you Geeklings, what has your anticipation levels high? Do you think Stranger Things and Game of Thrones trailers and/or release dates are coming soon? Is there something you’re excited about that didn’t get mentioned here? Sound off in the comments or you can even find me on Twitter @iamgeek32 if you’d like to talk more about things you’re looking forward to. Let’s build our geeky anticipation calendars together!