Geeklings, a very Happy New Comic Book Day to you all! Before we get into our normal Wednesday routine, I hope you guys could indulge me for a second or two. Part of what I love about writing the Pull List each and every week is the personal nature of the column. It feels like I get to speak with you guys on a one to one level every Wednesday about something we both love… comic books. I write a lot during the week but this is hands down always one of my favorite columns to write. Without fail.

Today’s New Comic Book Day falls on a tough day for me. Five years ago, I lost my father to his battle with brain cancer. My father was the absolute best and the passage of time brings with it a sort of peace and understanding, but it doesn’t negate the loss. I miss him every day and would give anything just for one conversation. But with today being New Comic Book Day, I thought maybe you guys wouldn’t mind so much if I took a minute to share a comic related story about my father.

Back in 1992, DC Comics were set to kill Superman. I was about ten or eleven years old and was waaaaay into superheroes but had irregular comic reading habits. I was mostly reading whatever I could get my hands on and reading a number of books way out of order just to spend time with my favorite heroes. My dad heard about the Death of Superman on the news and decided that he was going to take me to a local comic book shop at midnight to buy the issue. The Death of Superman was this monumental thing in pop culture at a time where superhero deaths weren’t as cheap as they are now. My dad told me that night after school what was happening and what we would be doing and around eleven o’clock, on a school night, my dad and I drove twenty minutes to our closest local comic book shop so we could get one of the first issues of the Death of Superman. We waited on line for a while as the cashier handed out issues and rang everyone up. I remember the excitement in being there, standing in line with a bunch of comic book readers, and feeling like this was a big deal. My dad was not a big comic book reader, if at all. He had knowledge of superheroes from when he was a kid and through my action figures but he knew how much these characters meant to me. It was his idea to take his ten-year-old son to a comic book shop, twenty minutes away, around midnight, on a school night because he knew it was a big deal and that his son loved superheroes and comics.

The memory of that event has never left me and opened the door for me to become a heavier comic book reader. During that summer my father drove me to the comic shop to comic shop so I could get the latest issue of the Return of Superman or some Dark Horse Aliens book, and it was awesome. Each visit was special. As I said, my father was the best and he wasn’t around before I started writing this column but I’d like to think that he knows the large role he played in making comic books so damn special.

I hope you all have someone in your life that you can share comics with like this. It truly is the little things in life that build the most wonderful memories. And with that being said, thank you for that moment. What do you say we start breaking down this week’s books? Starting with… 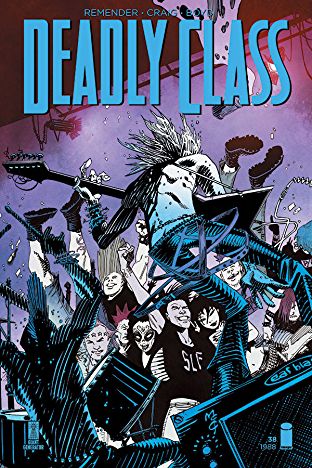 Deadly Class #38– If you went to your local comic book shop last Saturday and picked up the Free Comic Book Day issue of Deadly Class then you’re getting two new issues of the series less than a week apart. Happiest of happy days! The FCBD issue was a nostalgia trip filled with characters past and planting the seeds for what I think will be a big story arc for Viktor. Issue #38 though, is a book that sees Marcus and Maria return to King’s Dominion for the first time since everything went sideways. Marcus is on a mission to set everything right. To avenge those who have fallen and maybe take down the hierarchy and that all starts with Master Lin and Shab’s comity of goons. I expect this issue to be full of a number of different emotions as Marcus faces his greatest fears. Don’t forget either that Saya is free and on her way back home too. A lot of roads converging on one place and Deadly Class is at its best when the emotions are the rawest. I’m so ready for this. 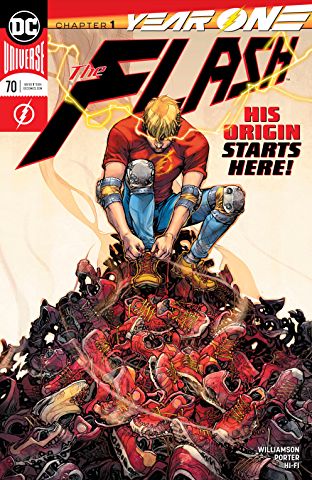 Flash #70- I’m not a huge fan of these type of Year One storylines as they tend to break up the flow of the current narrative and are primarily used to retcon something out of existence. It’s a little bit different with this current run of The Flash though. Joshua Willamson is truly having an all-time Flash run, and if he’s taking time to explore Barry’s first year as the Scarlet Speedster in Central City then I have to believe that this is going to come into play in a major way later on. On top of that, I really believe a character like the Flash lends himself to this sort of flashback storytelling especially when you consider all the time travel he’s involved in. Willamson has been delivering epic Flash stories for sixty-nine issues, I don’t expect that to change here and am very much looking forward to what he has planned with Barry Allen’s first year.

Batman and The Outsiders– They say all good things must wait and we comic fans have been waiting for Batman and The Outsiders for quite some time. Originally slated to be released in December, the book was put on hold for #reasons until finally being released today. Penned by the fantastic Bryan Edward Hill with art by Dexter Soy, B&TO sees Batman team up with Black Lightning, Katana, the Signal, and Orphan to help solve a mystery that comes right out of the pages of James Tynion IV Detective Comics run. Here’s a book that is sure to live up to its expectations and demands to be put on your monthly pull lists!

Friendly Neighborhood Spider-Man #6- Tom Taylor isn’t all doom and gloom. When he’s not finding new ways to destroy the DC Universe, Taylor is writing quite the excellent Spider-Man story with Friendly Neighborhood Spider-Man. Taylor’s writing style fits the voice of Peter Parker/Spider-Man so well and he taps into the emotion of the character almost effortlessly. Taylor’s run has already included a cancer-stricken Aunt May and this issue promises some big things ahead. Between Taylor and Nick Spencer, it seems that Spidey is in good hands over at Marvel. Beware this issue comes with feels.

Captain Marvel #5- This is it, the conclusion to the Nuclear Man story arc that kick-started this latest Captain Marvel run. Kelly Thompson has been absolutely killing it thus far with Carol Danvers as she’s introduced this Mad Max type storyline that’s touched on a ton of Carol’s past stories while shaping the future of this book. If you left the Captain Marvel movie thinking “wow, Carol Danvers is such a badass” then turn your attention to this series because Kelly Thompson will only further convince you. On top of that, can we just take a second for this cover? My god, it’s gorgeous. Amanda Conner just bringing it here! 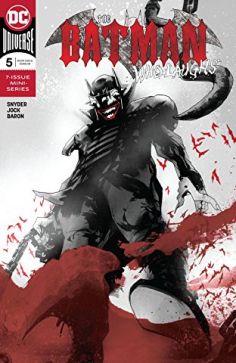 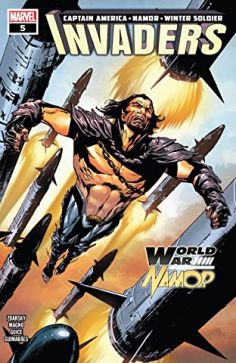 There you have it Geeklings, all the best books to get your mitts on this week. As always, if you feel like I’ve left anything off of this week’s Pull List be sure to let me know in the comments. If you’d like to talk more comics with yours truly then feel free to throw me a line over on Twitter @iamgeek32. The comic talk flows freely there my friends. Before I leave you, be sure to keep an eye on any and all Marvel books this week as they seem to be announcing some mega creative teams for our future. I’m still not sure what it means but it’s got me a tad bit excited. More on that as it takes shape, but until then, happy reading and many huzzahs!