Geeklings, a very Happy New Comic Book Day to you all and welcome to the first Pull List of 2020! Man, I’ve missed talking comics with you guys. The holidays got all types of hectic with NCBD falling on Christmas and New Years it totally threw our time together off. The good news is, holidays are over, I’ve caught up on a number of books I was behind on, and we can now focus on the important things again. Like comics.

What is a Wednesday without the Pull List? Kind of boring? Incomplete? Only half of the awesome? All of the above? Well, fret no more my friends there are new comics to be read and I’m here to discuss them with you. In fact, I’m so excited to talk comics again that I want to skip all the pleasantries and just jump right into it. Let’s get things rolling with a new writer on a major book…

Batman #86- Tom King’s run on Batman has concluded. Long live Tom King. Fear not, he’ll return to finish his massive story with the much anticipated Batman/Catwoman title this year, but the show must go on. The Batman main title can’t just sit on the shelves as we recover from the events of King’s run. Nope. Instead, it’s time for a new status quo from writer James Tynion IV. A new status quo that acknowledges what came before while forging ahead into new territory. Tynion IV is no stranger to Batman having written him in Detective Comics and Batman Eternal (to name a few) so there won’t be a transition period where the new writer has to find his tone. Tynion knows how to write for Bats and that helps make the change a bit easier on the readers. What can we expect for our friend Batman and Gotham City after the events of “City of Bane”? Well, we know from the teaser at the end of issue #85 that the Joker might not be willing to sit on Batman’s secret identity anymore. You know, for a little variation. Then throw in the fact that Deathstroke is chillin in Gotham for reasons unknown that are sure to screw with Batman’s new vision for the city. Tynion IV isn’t wasting any time with his run and I’m really looking forward to see what he brings to the main title. A new era begins right here!

Star Wars- The Rise of Kylo Ren #2- If you’re living in that post-Rise of Skywalker world where you need all the Star Wars at all times then I feel you. I’ve been reading novels, comics, playing Jedi Fallen Order, listening to podcasts (Binge Mode represent!), and listening to the scores on constant. I want all the Star Wars content pumped directly into my veins. Good thing this new series from Marvel, written by Charles Soule, is here to help satisfy those needs. It’s the Kylo Ren origin story you’ve been waiting for breaking down just how Ben Solo became the feared Kylo Ren. If you wanted to know exactly what happened to Luke’s Jedi Academy, look no further. If you wanted to know the origin of the Kylo Ren name, look no further. If you wanted to see the role Snoke played in all this… look no further. The new trilogy becomes more defined with this miniseries making it a must-read for all fans of a galaxy far, far away.

Star #1- I find that NCBD is made that much better whenever we get new books from certain authors and Kelly Thompson is one of those authors. Spinning off her Captain Marvel ongoing comes this miniseries (five issues) and following new character Star, the one who tried to kill Captain Marvel and failed. The one who was created as a Kree/Human super soldier from the Reality Stone. The one who is currently spending her days and nights in the Raft. That Star. Her fall from grace isn’t the end of her story as the Reality Stone has once again found her and things are about to get nuts. If the write up of this book is to be believed then what we know about the Infinity Stones is about to change. What does this mean for Captain Marvel and the Marvel Universe as a whole? No clue but I can’t wait to find out!

Stranger Things- Into the Fire #1- While I was completing the Best of 2019, I realized that I miss Stranger Things. Quite a bit actually. Filming of the new season is set to begin soon meaning that the fourth season will probably be released sometime this fall, but that seems so far away. I don’t want to wait for new stories in the Stranger Things universe. Good thing Dark Horse is here with a new series full of stories about the other patients Dr. Brenner was using for his experiments in Hawkins Lab. This book looks to pick up after the closing of Hawkins Lab where two former subjects go looking for Nine who we met in Stranger Things: Six. She was one of the twins with some super pyro powers. Now she’s a mess and spiraling out of control. Which isn’t good for anyone. This new ongoing looks to world build the Stranger Things Universe even further and hopefully hold us over some until season four is released. 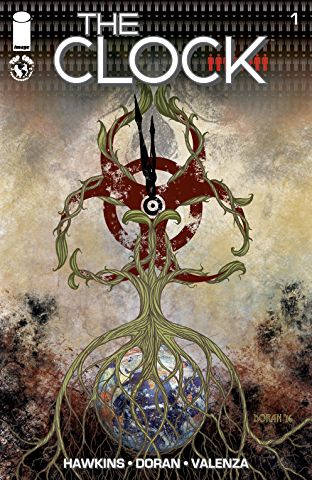 The Clock #1- What if cancer became a transmittable virus that people could pass it along to each other at a rapid pace? Sounds terrifying, right? Like super The Stand levels of horrifying. May I introduce you to the newest series at Image Top Cow, The Clock where the world is, in fact, dealing with viral cancer. What world wide virus story would be complete without a scientist who risks losing his family, works to find a cure for the new epidemic, and could possibly start World War III. Nothing like a world crumbling virus story to ring in the New Year. Bring on the Purell. Written by Matt Hawkins with art by Colleen Doran.

There you have it Geeklings, all the best books to get your mitts on this week. As always, if you feel that I left something off this week’s Pull List be sure to sound off in the comments. If you’d like to talk more comics with yours truly then you can find me over on Twitter @iamgeek32. I’m open to any and all comic related discussions. That’s it for this week, 2020 is in full swing and with it comes a new year of comic book awesomeness. Prepare yourselves, it’s going to be a kickass year. Happy reading and many huzzahs!