Geeklings, what a fine ass New Comic Book Day we have today. The sun is out, it’s a little chilly but it’s not snowing, I’m basically caught up on most of my books (with the exception being Amazing Spider-Man cause I’m a slacker), I just finished Locke & Key literally last night and I’m just hyped by the gift of storytelling. And to celebrate that hypness, today is Wednesday and there’s a new crop of books to pull from the shelves and bring home with us for eyehole/soul consumption. The gift of reading comics my friends.

We’ve got a bunch of books to get you randomly dancing at your desk at work as you build anticipation of getting to your local comic book shop while your co-workers look at you with that who farted type face. But don’t even stress about that face. It’s NCBD, they’re just jealous of your weekly holiday. Maybe explain it to them and then the two of you can embark on a comic book adventure together. Pretty soon you’ll both be dancing at your desk come Wednesday. How fun would that be?!

Enough work fan-fic, let’s get to this week’s books. Let’s kick things off with the return of one of I Am Geek’s favorite writers and artists…

Strange Adventures #1- It seems like it’s been for-ev-er since Tom King was on our shelves and I’m ecstatic to report that the drought is officially over. It’s not like I was sitting in my favorite chair, rocking back and forth, staring at covers of his previous works while muttering things like “come back, come back, come back…” because that would make me a crazy person. But none of that matters because Tom King has returned with a brand new series and he’s brought Mitch Gerads and Doc Shaner on art duty which already makes us super spoiled. Strange Adventures looks to be a part of the spirit trilogy of King’s The Vision and Mister Miracle as it takes a beloved lesser-known character, thrusts them to the forefront, and tackles some pretty serious issues.  Do you need to know anything about Adam Strange before reading? The answer is a big ole nope. This book is super accessible and will hopefully have you digging back through Strange’s archives in the search for more stories. The creative team behind this book is the selling point and sometimes it’s best going in knowing that you’re with an author and artists that work brilliantly together and reward their readers with strong, emotional, poignant narratives. Plus, this one will have space adventures. What more could you ask for?! 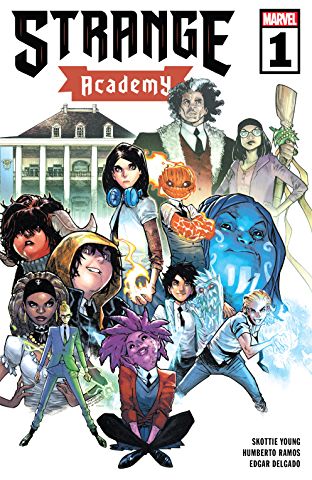 Strange Academy #1- But wait, there are other’s another huge release today with “strange” in the title! If you’ve read any Marvel book over the last month or so then you’d know the company has been hyping the hell out of Strange Adventures for quite some time as they’ve included preview pages in the back of just about everything. And they should be hyping this book because it sounds fantastic. Call me a sucker for any story about a magic school but now put that magic school in the middle of the Marvel Universe with Skottie Young on writing duty and Humberto Ramos on art… you son of a bitches, I’m in. As for the book itself, Doctor Strange has reluctantly opened a school to teach young sorcerers, all connected to other Marvel characters, in New Orleans. He’s brought characters like Brother Voodoo and Scarlet Witch (ever heard of her?!?!) with him to teach. That is literally all I need to know that this book is a can’t miss. 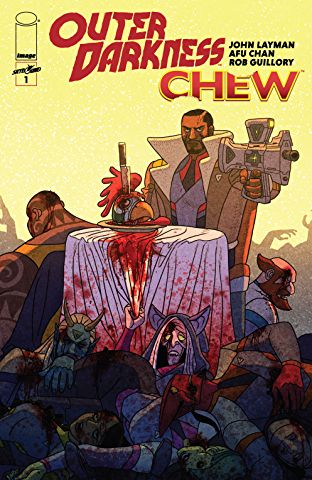 Outer Darkness/Chew #1- Who else has been missing Chew? Don’t be shy, raise your hands. Now put them down because the other people in the room are looking and raising their eyebrows in that The Rock kind of matter but they’re clearly not smelling what you’re cooking. John Layman smells what you’re cooking though and he’s clearly missed writing about Tony Chu. Now he’s giving us the crossover we didn’t know we wanted and he’s treating it as an addendum to the now completed Chew series. What’s really cool about this book is it combines the artists of both series, Afu Chan and Rob Guillory, to share art duties which will give this series a very inclusive feel for both universes. Getting more Tony Chu stories just helps to make this NCBD that much better. It’s like finding two fortunes in your cookie or two toys in your cereal. It’s the gift that keeps on giving.

Superman: Villains #1- In a bold move, that I’m sure will be wiped out by whatever the next DC Crisis is, Superman has revealed to the world that he’s also Clark Kent. So now, the world knows who Superman is but you know who is a part of that world? Villains. And now villains know who Superman is which must make his family feel all types of not safe. This is why Spider-Man is so protective of his identity… outside of that time, Tony Stark convinced him to hold a press conference during Civil War and unmask. Villains looks to tackle how these bad guys are reacting and in order to explore this, we’ve got quite the writing team. Not only do we have Brian Michael Bendis but we’ve also got Jody Houser aaaaaaand Matt Fraction writing a story where the Joker basically laughs at Lex Luthor for not knowing who Supes was. It’s a gem and totally Fraction. Things are changing for Superman as we’re still learning the impact of his reveal.

Ms. Marvel #13- Honestly, I don’t’ speak about this book enough and that’s on me because it’s fantastic. Like, really, really fantastic. I was skeptical about losing G. Willow Wilson on the title but Saladin Ahmed has been killing it. He has taken the emotional beats that Wilson built her run on and has delivered some truly beautiful/heartbreaking/breathtaking character-driven stories. Kamala Khan is the future of the Marvel Universe and her books manage to be both incredibly personal while bleeding into whatever is going on in the MU at the moment. She’s the hero we need and deserve and if you’re not reading this book you need to change that ASAP. I promise you won’t regret it.

There you have it Geeklings, all the best books to get your mitts on this week. As always, if you feel like I’ve left anything off this week’s Pull List be sure to sound off in the comments. If you’d like to talk more comics with yours truly then you can find me over on the Twitter @iamgeek32. As you can tell, I’m pretty fired up and plan on spending the rest of my evening reading comics and giggling… or crying because #tomkingmakesmecry. I’ll see everyone next week, happy reading and many huzzahs!