Geeklings! You know what’s a great feeling, knowing on Monday most of the things you’re going to be writing about for the week. It’s exciting and helps take the stress off of sitting in front of the laptop and going “hmmmm what should today’s topic be?”, not that this happens all the time but it happens enough. I’ve already got three or four topics mapped out and I’m pumped. I kind of want to write them all now but that would be exhausting and not as fun, so I guess we’ll just have to be patient won’t we?

But don’t worry as there is plenty to cover in this weeks Week In Geek. As a matter of fact we’ve got ourselves a pretty full plate. Last night I couldn’t fall asleep right away, mostly because I was still recovering from the sexual mind assault from Westworld but truthfully it was because I had ice cream with gummy bears around 9:45. While a tasty treat that sugar didn’t make falling asleep very easy. I regret nothing though. What does this have to do with last night? Oh, yes! Last night while I wasn’t sleeping or reading Westworld theories I was able to map out just what would be making the Week In Geek, and I was even able to retain those thoughts this morning when I went for my walk! It’s going to be a good week. Can’t you feel it? Or would you prefer if I just broke it down for you? Of course that’s what you want.

1. DC Arrow-verse TV Crossover Extravaganza- (I just wanted noted that I spelt extravaganza right on my first try. Suck it spell check!). One of my favorite things about the CW Arrow-verse is the crossovers and how it feels just like a comic book. The fact that any one of these characters can show up on any one of these shows at any given time makes things a lot of fun. I’m a sucker of for all inclusive universes. This years crossover will be four episodes long and spread out through out four different shows (starting tonight with Supergirl, and moving on to The Flash, Arrow, and concluding on Legends of Tomorrow) as our group of heroes battle an alien race called the Dominators (comic fans know what’s up). This will be the first time that the majority of these heroes meet Supergirl (she’s on a different earth) and based off of Diggle’s reaction to Barry’s speed one can only imagine what seeing Supergirl will do to him. This universe keeps growing and it’s been a blast to watch.

2. Westworld Season Finale– I recently had a four day weekend which played more like a mini vacation which was all types of awesome. I had two things planned; one was cleaning out my kitchen closet and making it look less like a pit of despair and two, catch up on Westworld. Well, not to brag but I was able to get both of those things done. That’s right, I’m kind of the best. What can I say about Westworld without spoiling this weeks column about it… I just can’t. This show brings up such crazy philosophical questions while also posing layered mysteries that make me want to pull out my eyelashes as I try to comprehend them. Seriously, the Week In Geek is not the spot to break this thing down so look for me later in the week to discuss how this show turns my mind to goo. But also brace yourself for the finale on Sunday. I hear that it’s 90 mins and one has to believe it’s going to be filled with mind blowing answers or questions or all of the above. If it wasn’t for the massive DC crossover I’d spend most of this week re-watching this season. True story. 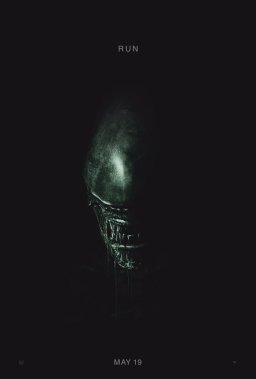 3. Alien Covenant– Late last week I was going through my Faceyspace feed and this poster was staring me in the eye and my immediate reaction was “What is this?! What is this?!“. It was so unexpected and awesome looking that I could hardly contain myself. The Alien franchise is one of my favorite movie franchises of all time (minus Resurrection because that film is hot garbage) and is actually where Hudson the Cat gets his name from. It seems like it’s been forever since a good Alien movie was released and I think the world is ready for one. While I enjoyed Prometheus and how it had strands of the Alien franchise floating through out it, I never viewed it as an Alien movie. Well, it looks like the sequel, Alien Covenant, is not only going to directly involve the xenomorphs but it’s going to further explore their origin. The best part about this was I didn’t even know they were filming it yet and the release date got bumped (clearly I was out of the loop here).  This poster is a call back to everything that made the original great. It’s simple and eerie and to the point. “Run”. You bet your ass I will be. I’ll be running right to the theater when this thing comes out (I’m sorry I know this was cheesy as I was typing it… #noshame)

4. Childish Gambino “Awaken My Love”- A new Childish Gambino album? Yes please. What I love most about Donald Glover is his willingness to not be content. He’s an actor, and a writer, a producer, a singer, a rapper, soon to be Lando, and comedian. Glover is kind of a jack of all trades and excels in all areas. I’m a big fan of his music, which is constantly adapting to new sounds and styles, and was fortunate enough to see him live a couple of years ago. “Awaken My Love” seems to be an R/B, funk, 70’s type album and I’m all for it as I’ve been listening to a lot of that style of music lately. If the album’s lead single, “Me and Your Mama” is any indication then this things going to be a filled with all types of funky energy. Already looking forward to putting it on repeat along side the new A Tribe Called Quest album.

5. Rogue One Tickets Are Now On Sale– Go out and buy them! Now! This thing is going to be ten pounds of awesome in a five pound bag. Ahhhhhhhhh

2 thoughts on “Week In Geek- Westworld Season Finale, A New Alien Movie, and A Massive Crossover”