Geeklings, a very Happy Monday to you all. I hope your weekends were all types of awesome and that you had the day off from work today. Nothing better than a three day weekend and I actually got to fully appreciate it as I didn’t work a Saturday for the first time in a month and a half. It was all types of glorious. For those of you who were wondering, yes I survived laundry, but barely. I won’t have to worry about that again for at least two weeks (I have lots of socks and underwear) so I’ve got that going for me.

While Monday’s are easily the worst day of the week, although I would argue that sometimes Tuesday lulls you into a false sense of comfort that isn’t really there, it’s one of our favorite days here at I Am Geek. Monday we get to celebrate all things good for the week ahead and we’ve got plenty of things to look forward to Geeklings. This is a week of returns, epic returns, and I Am Geek is here to break them all down for you. Shall we? 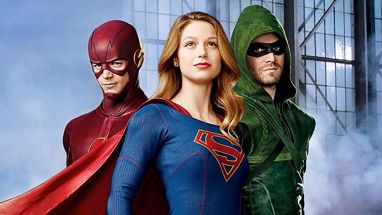 1. The Return of CW Arrowverse Shows- I know that Christmas break wasn’t that long, it’s only about a month and a half, but it seems like forever since the CW’s Arrowverse has been on tv. It’s time that we get our superheroes back! I mean that in more ways than one. I have been less than thrilled with the current seasons of these shows and I’m hoping that their return could bring about a better second half of the season. Bring the shows back to what made them great in the first place. With The Flash letting the story and the characters act organically and stop shoehorning in a brighter atmosphere. With Arrow I’d love to see the show try and recapture the gritty nature of last season while making this season big bad a larger focus than the inner dramas of the group. I know a lot of this sounds like complaining but, believe it or not, I’m really excited for the shows to return. The week just makes more sense when I can see Barry Allen and Oliver Queen kicking ass!

2. Levar Burton Reads Season Two- When I heard that Levar Burton was going to be hosting a podcast where he chose a different piece of short fiction a week and read it to me, I kind of geeked out hard. It brought back allllll those Reading Rainbow feels. I’m not big into audiobooks but for some reason, the prospect of Levar Burton reading fiction to me sounded like the best podcast idea in the history of podcasts. The first season did not disappoint either as Burton chose some fantastic stories that made my morning commute ridiculously enjoyable. And then, it ended. I came to find out that Levar Burton would be doing the podcast in season format and I had to wait for more stories to dance across my earholes. Well Geeklings, the wait is over as Levar Burton Reads returns tomorrow. I believe season two will have twelve new stories and will surely capture the magic of season one or Reading Rainbow. I’m definitely looking forward to listening to these in the mornings while I’m at the gym wishing I was sleeping. A little something to ease the pain. 3. Return of the I Am Geek Podcast– That’s right, you read that correctly. The I Am Geek Podcast is returning. Tomorrow in fact! I spent a good portion of the day with Jennifer and Paul in the lab as we got back to doing what we love… recording episodes of the I Am Geek Podcast. And talking about ourselves. We like doing that too. I won’t get into what the episode is about as you can tune in tomorrow for that but I will say it felt great to get back at it and feel really confident about the direction of the show moving into 2018. We even started a dialogue today with Squatty Potty as a possible sponsor! Something we’ve been pining for since episode five. I will keep you abreast of the situation as things develop but there has been a Twitter exchange and an email sent so it’s a very possible thing. In the meantime though, we’re back and looking to give you new episodes every two weeks. We’re also looking to get on iTunes too, finally, because that’s what grown-up podcasts do.

4. Black Lightning– With an already stacked deck of superhero shows it might come as a little surprise to hear that the CW will be adding one more to the rotation tomorrow night. That’s right, Black Lightning will premier at nine tomorrow and I have to say I’m very much looking forward to the show. Unlike the Flash and the Green Arrow, I don’t know a whole lot about Black Lightning but as I’ve read up on the character I understand that he has a bit of a cult following. From what I understand the Black Lightning show will not take place within the Arrowverse but will be apart of the multiverse, much like Supergirl, which gives it a degree of freedom. The show looks gritty and dark and rooted in family with elements that seem a little different than the other shows currently circulating on the CW. The CW track record on superhero shows has been pretty strong which means there’s a lot to look forward to here.

There you have it Geeklings, what are you looking forward to the most this week? Be sure to sound off in the comments or you can find me on Twitter @iamgeek32.