When I was a kid my parents used to get me these comic starter kids for Christmas. It would come with something like forty comics from both Marvel and DC (I think) and would be a massive diverse introduction to both universes. It would also come with fancy layouts for boxing your books. I remember one that was designed like a building out of Gotham or just a skyscraper. Sadly that never got put together, I was too busy trying to read these books. Through these comic starter kits, I met characters like Sleepwalker, Ghost Rider, Iron Man, Black Panther, The Flash, Superman, and many, many others. But through all these characters there was one book that I remember the most vividly as it was my first introduction to Marvel’s band of mutants… X-Men #42 the Dark Phoenix. 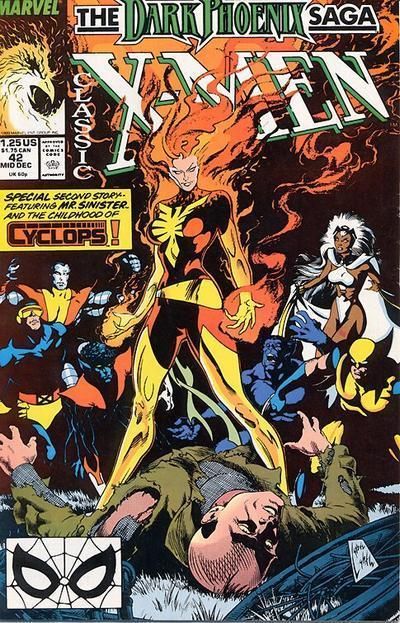 I remember the cover vividly. I remember the excitement of reading the story over and over again. Comic collectors would shudder if they saw the condition of the book. I remember finding the issue of Uncanny X-Men that concluded the story, and I remember thinking “whoa, what was that”. Ever since that moment I was a Jean Grey fan and it took time for me to better understand her, but the Dark Phoenix Saga has always held a special spot in my heart as it was unlike anything else.

I remember the ‘90s X-Men cartoon covering the storyline and it being awesome, man, I loved that cartoon and I remember the excitement when X2 dropped that teaser at the end foreshadowing the rise of the Phoenix. It was with much anticipation that I prepared myself for X3: The Last Stand and we all know how that went. A Colossus size let down. It seems that every third X-Men movie is destined to lay an egg as Apocalypse did the same thing. Taking a massively important X-Men story and dropping the ball. Both films were handcuffed by being actor-driven films opposed to character driven. Last Stand was a vehicle to showcase Hugh Jackman and thrust Wolverine into a role he never should have had. The result was a mess. The same thing happened with Apocalypse as Jennifer Lawrence was thrust to the forefront and the movie suffered because of it. Don’t take it the wrong way, these movies didn’t bomb because of the actors being pushed to the front, no. These movies bombed because their characters should never have been pushed to the front of the line. Both Mystique and Wolverine work better when they aren’t leaders and just because the actors who play them are huge stars it doesn’t mean that they eclipse the characters they play.

Apocalypse left a bad taste in my mouth and my excitement for the X-Men movies kind of wavered. I had heard that Dark Phoenix would be the next film, and the hiring of Sophie Turner all but guaranteed it, but I was skeptical. This was Dark Phoenix! The first X-Men comic I ever read. It needed to be done correctly or don’t bother doing it at all… but Fox went for it and they released a trailer and my immediate reaction was “oh”, and while I was processing my feelings on the film they pushed the movie’s release back. Waaaaaaaay back to the point where it almost seemed that the film wouldn’t see theaters. It’s always disconcerting when you hear the term “re-shoots” and that was something that plagued Dark Phoenix.

Not helping matters was Disney’s acquisition of Fox. If Disney was acquiring the rights for the X-Men movies there was little doubt that they would start things new, and who could blame them. As much as I enjoy the majority of X-movies there is no denying that the timelines are an absolute mess. Origins was a great re-boot of the franchise but just clouded things even further, and while I loved Days of Future Past (despite the comic differences) it didn’t help smooth out the timelines any. Especially when concerning Wolverine. That’s why the timeline joke in Deadpool is so funny. It’s almost like Fox acknowledging that they have no idea either, and while it’s funny that they’re aware of the issue it would be so much better if they addressed it. Or even fixed it.

Disney getting the rights to the X-Men is a big deal. Not only are we about to be given a Marvel Universe with the majority of its characters, but we stand to see a better interoperated X-Men universe. Don’t get me wrong, those first two X-Men movies are instrumental in kicking open the door to the MCU and superhero movies as a whole, but as a fan of X-Men comics, they are not the best representation of the source material. Not by a long shot, and with Kevin Feige at the helm, it’s hard not to imagine X-Men movies within the MCU with stakes and timelines that sync up. Granted, that’s looking past the fact that the timelines in the MCU are a bit cloudy but when push comes to shove they’re a hell of a lot clearer than any of Fox’s X-Men movies.

All this has me wondering, do we even need this Dark Phoenix movie? At this point in the game, what does it matter? Of course, Fox would take a massive financial hit by not putting it in theaters but based on the reactions of this latest trailer it almost seems safer to keep this thing shelved or maybe a Netflix type release. Because when push comes to shove nothing in this movie matters other than the fact that this cast is getting a sendoff, and that’s all this boils down to. I very much doubt that this is going to lead the X-Men into the MCU, Kevin Feige will want alllll the control over that and Infinity War gives the MCU the perfect setup to introduce mutants. When everyone returns from The Snap some come back with new mutated powers and boom the mutants are born! It almost writes itself.

Which puts Dark Phoenix in this strange limbo. If this trailer is any indication this film will not be another Jennifer Lawrence vehicle, in fact, it looks like this might be it for Lawrence’s Mystique. I can’t be the only one who believes that Jean Grey accidentally killed her in an outburst of power. While moving on from Mystique is a positive I’m still not entirely sure Fox understands how to write Jean Grey or her relationship with others. Charles seemed to be acting in a way that didn’t feel very Charles like. In the comics, Charles was always supportive of Jean and wanted to help her despite her loss of control, confusion, and fear. Visually the trailer looked stunning but left me with a feeling that this could be another Apocalypse situation.

The X-Men franchise is in flux and that’s a great thing as a fan of the comics but dampers any excitement for upcoming films. Just look at New Mutants which seems to have been permanently shelved. What’s the point of releasing these films if Marvel Studios is about to wipe the board entirely? I for one think the next time we see an X-Man it should be through the MCU as the franchise gets a reboot and a fresh take. Another poor film does nothing but hurt the product and exhaust the fan base just look at the damage Amazing Spider-Man 2 did. And while Dark Phoenix looks to be a finished film maybe it’s best for all involved if it never makes the light of day. Maybe that’s the best thing we can do for this story… shelve it until it can be done correctly.

5 thoughts on “Does Dark Phoenix Even Matter?”