Waking up at five o’clock in the morning blows. There’s no way around it, it just sucks. I would love to sleep until six, seven, eight o’clock but there is too much to be done and no time to waste. I can hear you now, “what could you possibly have to do at five o’clock in the morning” and the answer is mostly work out and get ready for work. I get home from work around six o’clock at night, after sitting in traffic, and the last thing I’m going to want to do is work out. I’m going to want to be a slug on my couch, post a column here, and eat the delicious dinner my lovely wife has cooked for us. She’s a gem.

Needless to say, five o’clock in the morning has become an essential time in my day. I get up, walk my wife across the street for her spin class, gym it up, then start the process of getting ready for work. I’ve grown accustomed to the dark (#accidentalbanevibes) but this morning it was snowy and frigid. There’s nothing worse than waking up at the ass crack of dawn to step into weather that is just mean. If you weren’t awake before that then you are the minute your foot steps out your front door. Life comes at you fast.

Sounds like a pretty rough way to start the day, no? And it can be but this morning wasn’t so terrible. In fact, it came with a pretty fantastic surprise.

As I rolled over in bed to kill the alarm slowly escalating from my phone, I don’t like the blaring it’s too aggressive early in the morn, I noticed that I had some Twitter messages. One, in particular, caught my eye. Marvel Studios had posted something for the first time in a while. I immediately went from sleepy faced to “we got an MCU trailer today” faced. I had heard rumors that this weekend we could possibly be getting our first look at Black Widow but it looked like Marvel wanted to get ahead of the upcoming James Bond trailer with their own super spy. I was more than willing to accommodate their decision by watching in my car before entering the gym. The car speakers give this surround sound-like feel and I didn’t want to play at home because the wife was still waking up and I didn’t want to accost her ear holes. I know, I’m a gem.

Besides kind of blindsiding me, how was our first official look at Black Widow? Honestly, I’m really impressed with what I saw here. Sure, this Black Widow film is a few years too late, there’s no reason that this shouldn’t have happened sooner, but it doesn’t negate the fact that this looks really slick. I get these Winter Solider vibes here which makes sense considering that was the breakout movie for the Black Widow character. The moment where she finally started to find something within the MCU. That sense of family she speaks of in the voice over. The film seems to be Marvel’s first true foray into espionage, as they continue to attempt new genres, making the trailer drop before Bond seem all the timelier.

Sure, in our current MCU timeline, Natasha is no longer with us making the opening voice over all the more heart-wrenching. Her sacrifice for the Soul Stone allowed our heroes to bring back those who were Snapped and caused the Hulk to kill mostly likely impale some random person with the bench he threw. There’s no way that thing didn’t just crash through some poor unsuspecting bastards living room. And while Natasha’s death hangs over the movie it doesn’t derail the trailer. If anything, it just makes her life more interesting. All this mystery that we haven’t yet explored. Like the fact that she has a sister! A sister who I’m willing to bet becomes the future Black Widow of the MCU.

Black Widow looks to be the farewell to Natasha that we didn’t really get in Endgame. Yes, we cried when she died. We mourned with Thor, Cap, and Bruce on the dock but there wasn’t a great deal of time to dwell on our emotions. We had to re-snap the world back into existence and take out Thanos. Sometimes we have to check our emotions for the greater good. Black Widow seems to allow us to celebrate the first female hero in the MCU by filling in the blanks to some of her stories. There are scenes throughout the trailer highlighting the Red Room and reminding me of some of the flashbacks from Age of Ultron. It’s completely possible for Black Widow, which takes place between the events of Civil War and Infinity War, to be a solo adventure for Natasha with flashbacks sprinkled about. Perhaps we finally get to see just what happened in Budapest.

On top of all this Geeklings, did you see David Harbour?! I mean, talk about stealing the trailer. Clearly, Hopper didn’t die in Stranger Things 3, the Russians took him back to the motherland to become a superhero. Red Guardian quickly became the standout character to this trailer and I can’t wait to see him play in the MCU sandbox. David Harbour is a gem and the more of him we get the better.

Speaking of stealing the show… did you see that white suit?! I had no idea how badly I needed Widow in that white suit. It looks slick as hell and I can’t wait to see her kick all the ass in it. Not to mention it looks like that white suit is going to be a part of skydiving scene that is very reminiscent to Mark Waid’s Black Widow run… in case you wanted to do some reading.

There is nothing better than being surprised early in the morning by a trailer you didn’t know was coming just yet. If the trailer is any indication then it seems that Black Widow will make up for its lateness and celebrate the legacy of Marvel’s number one spy. Not to mention, this will be the jump start of Phase Four so who knows how this is going to play into the bigger plans of the MCU, but I’m here for all of it. White suit, fat Red Guardian, and super spy moves and all. 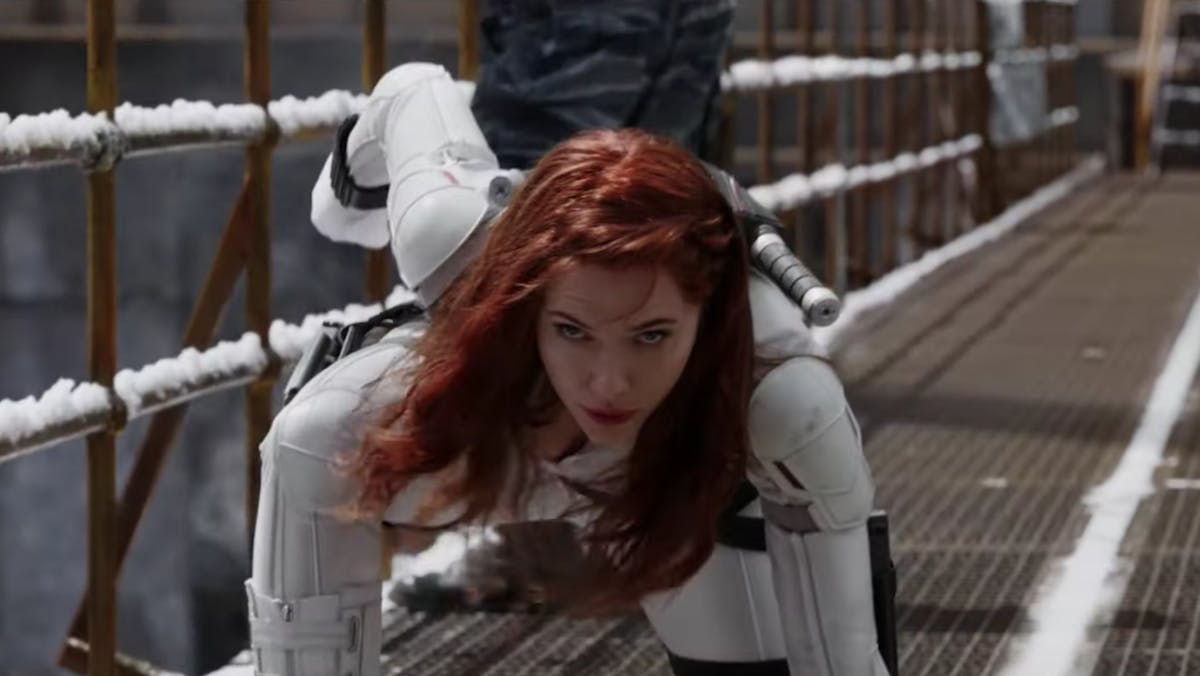