Geeklings, the holidays are over and we can finally start to get back on track here at I Am Geek. It’s a brand new year with brand new goals and a whole lot of ass to be kicked. We’ve got some big plans for the site moving forward and I’m excited to share them with you as we move ahead with them. The goal has always been expansion and after last year’s awesome statistical year, we’re looking to build on that momentum in the New Year and I’m all types of excited. You should be too! So, be excited. Go ahead. I’ll give you a minute.

You know what else comes with the holidays ending? A regular writing schedule. No more holidays to break things up. No more year in review columns to write. Nope, it’s onward and upward. Which means the return of both the Week In Geek and the Pull List. And sprinkled in between that the same editorial columns you’ve grown to love over the last four years of I Am Geek. Four years? Can you believe it? It feels like yesterday we were starting this endeavor together and look where it’s brought us.

Oh stop, I’m getting sentimental. Must be the new year. Look away Geeklings. Look away.

(insert moment where you look away)

Okay, what do you say we start breaking down the first Week In Geek of 2020?! There is a lot of awesome to look forward to and I say we kick things off with a motion picture film that I have been not so patiently waiting for. Of course, I’m talking about… 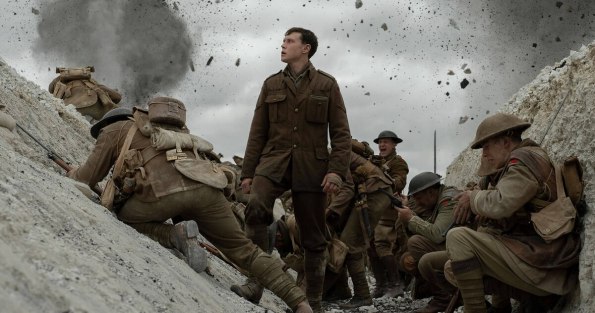 1917- The hype levels for 1917 have been high since my sister and I were able to see a feature on the film during New York Comic-Con. I’m a sucker for a good war movie but I feel like I haven’t actually watched a war movie in quite some time. Unless you count Star Wars which literally has “war” in the title. I digress. 1917 was the big winner during last night’s Golden Globes with it taking home Best Drama and Best Director for Sam Mendes. From what I understand, the entire movie is in real-time as we follow two soldiers and their attempt to prevent an ambush on allied troops. Who doesn’t love a good race against the clock? Then throw in the fact that the film is edited to look like one long tracking shot (something I’m also a sucker for)… then you got me. There are tons of award buzz surrounding this one and I expect things to heat up with the big wins last night. A small limited release only helped stoke the fires of anticipation here. 1917 just feels unique and special and those are the type of films we should be celebrating. If you need me this weekend you’re most likely going to find me parked in a theater seat holding my breath during this one.

The Outsider- Sunday went from being the best television night of the week to a baron wasteland. We went from having Watchmen, Mr. Robot, and Rick and Morty to nothing. Honestly, it was a tough way to end the year but there is a glimmer of sun on the horizon. Starting this Sunday, Stephen King’s The Outsider will start airing and I’m fired up for this one. Like most Constant Readers, I get a new Uncle Stevie book the day of. The Outsider was an addictive read that I couldn’t put down and had a connection to another series that I wasn’t anticipating but fully got on board with.  No spoilers here, but The Outsider was a fantastic read and now looks to be a must-see television series. The cast is legit with Jason Bateman, Ben Mendelsohn, and Cynthia Erivo with a story centered on the disturbing murder of a young boy in a small town. Things get twisted, bizarre, and eerie at rapid pace. I can’t wait to have Sunday television to look forward to again.

New Mutants- Honestly, I never thought we would actually get to see this movie. With the Disney purchase of Fox, all the reshoot rumors, the X-Men franchise kind of being in flux, and the rumors that the finished copy of the film was a dumpster fire, I wouldn’t have been surprised to see Disney just let this one fall by the wayside. But here we are, quite sometime after the planned original release, getting ready to actually see the New Mutants movie. Honestly, this pleases me. The prospect of an X-Men horror movie kind of sells itself and adds a new spin and a dash of uniqueness to the superhero genre. Throw in the fact that Magik and Wolfsbane look to be making their big-screen debuts, the stellarness of the cast (Charlie Heaton, Alicia Braga, Antonio Banderas, and Maisie Williams), and the always constant mystery of just how this will connect to their larger X-Men universe and we got a movie I’m very much interested in watching. Now that it’s confirmed that we’re actually going to get a chance to watch it… sign me up.

Dracula- It seems like there’s just been a shortage of awesome vampire content lately, hasn’t there? Like the last big vampire announcement we got was the fact that Mahershala Ali would be playing Blade at some point during the next Phase of the MCU. Oh, and the Avengers comic by Jason Aaron had a really solid vampire arc that you should read. Outside of that, it would seem that the glittering of the Twilight clowns set vamps back a little bit. Enter Netflix to change things up a bit. Allow me to paint my progression to the release of Dracula. I saw the trailer last week and got excited. I went on Netflix last night to watch more You season two and discovered it was out. Excitement levels were still high but I felt like I hadn’t truly prepped myself for the release. I need time people. Besides my own personal drama, Dracula is brought to us by the same team that gave us the insanely phenomenal BBC series Sherlock (Steven Moffat and Mark Gatiss). That right there is enough to sell me on the entire project. It’s only a three-episode season, just like Sherlock, and episodes are about an hour and a half… also just like Sherlock. And vampires. What more could you want? Bring on the vampire resurgence!

There you have it Geeklings, all the fantastic to make your week awesome. What are you looking forward to the most? Be sure to sound off in the comments or throw me a line over on the Twitter @iamgeek32. Big week ahead with a bunch of new content. 2020 kicks off with style!