Geeklings, May the 4th be with you! Can you honestly think of a better way to jump-start a week than with Star Wars Day? Especially during these strange times, it’s wonderful having a galaxy far, far away to turn to like a young Princess Leia putting all her hope in Obi-Wan. Now, sure, that’s a lot of pressure to put on Star Wars and it’s not like Star Wars hasn’t been there from the start of quarantine, but today, on May 4th what better time to celebrate our love for the franchise. Something that sometimes can be overlooked, like a couple of droids in the desert, because of various degrees of passion. And I’m not here to scold or talk on my soapbox, I’ve done that already, I’m just here to be excited about Star Wars. How excited? Well, I woke up extra early this morning, sat in my chair with Hudson the Cat, and watched the final episode of The Clone Wars to start my day. I regret nothing buuuuut I have had to carry those emotions with me all day. My heart is heavy but also soaring. We’ll get into this more this week but those final four episodes of The Clone Wars is some of the best Star Wars storytelling. Ever. Seriously.

With it being Monday though, there are other things besides Star Wars to be excited about this week. No, seriously. There’s a bunch of exciting new content heading our way this week, Week Eight of quarantine for yours truly, that will most certainly fill some of your time gaps. What kind of new content you say? Well, allow me…

Star Wars News- It is Star Wars Day after all so why not start with some of the news that was announced today. For starters, a new film directed and co-written by Takia Waititi! This is incredibly exciting with Waititi’s work in the season finale of The Mandalorian being some of the most fun I’ve had with Star Wars in quite some time. The unnamed project will be co-written by Kryst Wilson-Cairns who you may know from 1917, which she also co-wrote. If you were hoping for more Star Wars television then you’re also in luck as also unnamed series has been picked up with Leslye Headland as the showrunner. I suspect that this could be the long-rumored Doctor Aphra series and if that’s the case you noncomic book readers are in for a treat! Star Wars Day tends to be the gift that keeps on giving and I will gladly take alllllll the new Star Wars content and merch. All of it.

Dead To Me Season Two- Need something new to watch? Well, as per usual, Netflix has you covered with season two of Dead To Me, a darkly funny and at times super charming and emotional dramedy. Starring Christina Applegate who kills, maybe literally (???), and Linda Cardellini who you know as Mrs. Hawkeye, Dead To Me starts off with the death of Applegate’s husband from a hit and run and spirals from there. Tons of twists, turns, and laughs as things get dark and over the top crazy. It’s a quick watch and I’m looking forward to seeing what season two has in store for us. Especially after the season finale cliff hanger. Things are about to get real and I’m here for the chaos.

Solar Opposites Season One- Here you were thinking that the return of Rick and Morty was going to be all the Justin Roiland you needed for now, and along comes Solar Opposites to overflow your cup. Another animated series that sees a group of aliens trying to make it on earth opposed to Rick and Morty who are constantly leaving earth for space adventures. I believe the full season will be dropping this Friday on Hulu and the show might already have been picked up for a second season which is all types of great. Certainly makes binging easier. Early reviews are calling it a lighter version of Rick and Morty which I think is a good thing. There’s a darkness to Rick and Morty that is very much its own and I’m excited to see Roiland try something new or at least explore different ideas.  Solar Opposites can serve as a nice pallet cleanser and I’m sure there will be some sort of crossover down the line. Even if it’s Rick and Morty in the background of a scene. 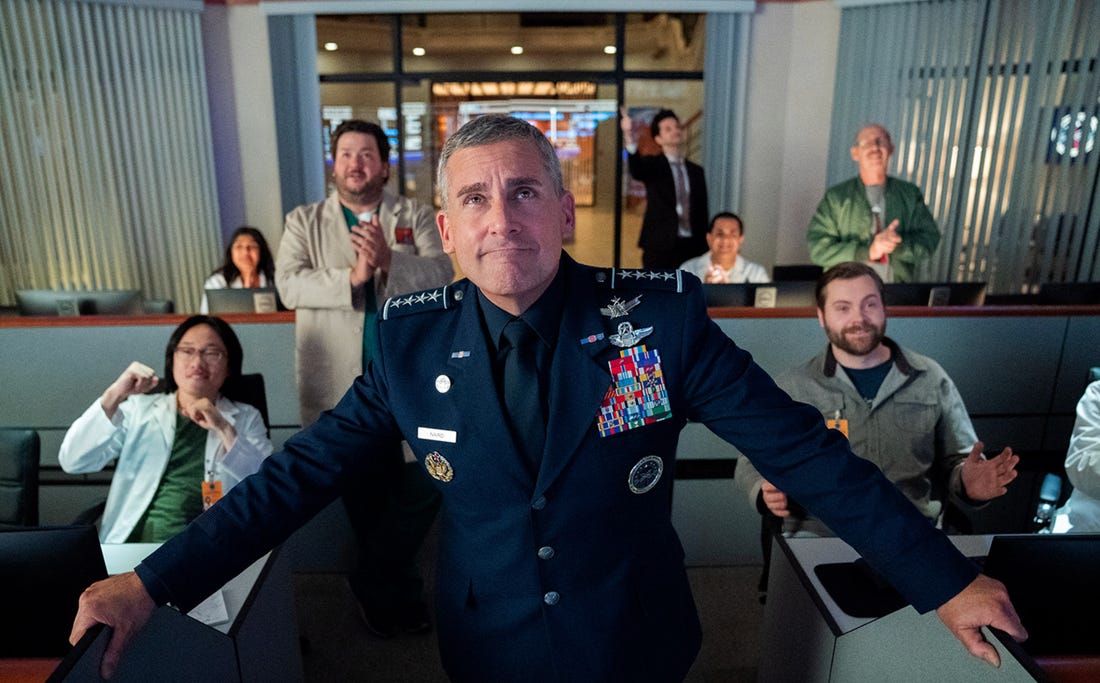 Space Force trailer- It seems like forever ago that they announced that Greg Daniels and Steve Carrell would be teaming up again for a Netflix comedy called Space Force. So much time had passed that I started to wonder if the announcement was a joke itself poking fun at certain country leaders who think a “space force” would be needed. Turns out that’s not the case and the show is very much real as it’ll be releasing later this month. To prove it’s realness a trailer will be released tomorrow. I mean, a show can not exist without a trailer,  right? I for one can not wait. Any time you’re going to team Carrell and Daniels together it’s almost guaranteed gold. Put them in space? Well, in space everyone can hear you laugh. Just ask Avenue 5.

There you have it Geeklings, a week filled with awesome all in one place. What are you the most excited about? Be sure to sound off in the comments or throw me a line over on Twitter @iamgeek32. There’s a lot to discuss this week and I’m hoping to discuss it allllll with you with new content galore. Be mindful out there, tomorrow is Revenge of the 5th and we know things can take a dark turn. Until then Geeklings, watch some Star Wars it’s good for your soul.