There was a time where my mornings were spent driving to work listening to the ESPN Radio app so I can hear Mike and Mike In the Morning (my sports program of choice), this is especially heavy during football season. Even more so if my Giants are a relevant team. If they play like crap I’d rather not listen to the show on Monday in fear of possibly having to re-live that trauma. Seriously, it hurt enough the first time. Lately though I find that I’ve strayed a little from Mike and Mike, and it isn’t because of a lack of interest. Quite the contrary, sports continue to be a big part of my life even if the Giants have been eliminated from the playoffs (*sigh*), what changed is I said I wanted to do a podcast. Ever since I made that proclamation (and it’s going to happen Geeklings) I found that it might be important to listen to some actual podcasts to try and get a feel for it. Novel idea, right?

With the winter having less then ideal weather conditions, I haven’t been walking as consistently as I’d like, but when I do I find that I really enjoy listening to a podcast. It’s not overbearing and can be a fun way to ease into the morning because let’s face it, mornings blow. If the show happens to be particularly good I carry the listening over to the car. Seems natural but does leave Mike and Mike on the outside. The rate at which I listen means it takes me like two to three days to complete an episode of a podcast, but it quickly has become something I look forward to. Enjoyable and inspiring. Lighting those creative fires.

Right now I religiously listen to Harmontown (from Community creator Dan Harmon and something mentioned on the Week In Geek here) and the Nerdist Podcast which is hosted by geek idol Chris Hardwick. Both shows couldn’t be any different. Harmontown has a town hall on acid feel to it and really makes the audience a participating member of every show (if they tour this year and come to New York I am totally going to those shows!) while the Nerdist Podcast is more Hardwick having a conversation with a different celebrity. While vastly different both podcasts have quickly become an integral part of my week and are helping me lay down the foundation for the I Am Geek podcast which coming this year.

All of that is sort of besides the point though. Last weeks Nerdist Podcast had the one and only Mark Hamill as the guest, and as you can surmise I got really excited for this show. I mean, duh of course I would. Clearly there would be some pretty big Star Wars discussions (come on Episode VIII), but Hamill has become so ingrained in geek culture that to hear him and Hardwick (who in a lot of ways helped to inspire this site. Felicia Day as well.) speak was enough to fill my heart with geekish delight. On the one hand you can hear the excitement in Hardwick’s voice to be conversating with someone he obviously looks up to, and on the flip side just to hear how cool and casual Hamill was. Half way through it though something dawned on me, and I can’t believe I haven’t put it together before now. But it went off like a light bulb. Just ding!

Geeklings, Mark Hamill is all types of awesome. No, for real. I listened to this Nerdist Podcast and I couldn’t help but think, “holy shit, Mark Hamill could be the most awesome person alive”. Saying it out loud now makes me feel kind of foolish because when you look at the evidence it seems pretty obvious. So today at I Am Geek I would like to take the time to celebrate the awesome that is Mark Hamill.

There’s so much more I could mention like his appearance in cult movies like The Guyver, a movie I was briefly obsessed with when I was thirteen or fourteen. I don’t know, I caught it late night on Showtime or something and was like “what is this”. Isn’t that how many brief childhood obsessions start? Granted I grew out of it but that movie holds a special place in my heart. The long and the short of it is Mark Hamill is the geeky icon that we not only need but deserve. Someone who understands his place in pop culture and rather than running from it he embraces it. So, today I’d like to raise a glass in celebration of the awesome that is Mark Hamill. Many huzzahs good sir. 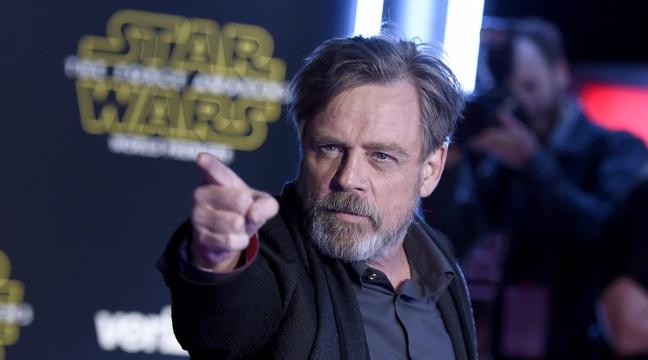 One thought on “The Awesomeness of Mark Hamill”