Geeklings, a very happy Monday to you all. I know that sounds kind of like an oxymoron, is there really such a thing as a “Happy Monday”? Doubtful but we’re willing to give it the old college try. Start the week off feeling positive and fresh and it’ll carry over throughout the week. Not to mention we’re only two days away from New Comic Book Day and that makes the week worth living for. Doesn’t it?

For those of you who are wondering, yes I did see Wonder Woman and no I don’t have a review for you. Tomorrow I’ll break down the whole sad tale of why I can’t review the film so I guess you’ll have to tune back in then. See what I did there? They call that building intrigue. Are you intrigued? Of course you are. It’s almost like I’m a master at this.

With all that out of the way there are plenty of things to look forward to this week and I know that’s the real reason why you’re here. You want the break down and I’m here to give it to you. Let’s do this.

1. New Game of Thrones pop vinyls- I know I’ve been relatively quiet here on the pop vinyl front lately but don’t confuse that for the fact that I’ve stopped collecting. In fact I’ve got a minor problem when it comes to my pops… I’ve got no where to put them. Currently all of my Stranger Things and Guardians of the Galaxy Vol. 2 pops are sitting in their boxes with no shelf space to call home. It’s killing me if I’m being honest. I hate seeing them trapped in their cages. I really need to do something about finding a new shelving unit. Of course this is the first step to admitting that maybe, just maybe, I have a bit of a pop collecting problem. Does this mean I’m going to stop? Of course not. Did you see that they just released the images of the new line of Game of Thrones figures?! Ugh. There are four of them that I already need. For starters there’s a Tormund one! Then add in King Jon, Hand of the Queen Tyrion, and Queen Cersei and my ass better get in gear and get a shelving unit or pretty soon I’m just going to be overcome by pops without homes. I am disappointed that there is no Davos pop yet but holding out that someone will get an exclusive somewhere.

2. Orphan Black– I feel that while there has been a lot press through BBC America that this is the final season of Orphan Black, there has not been a lot of trailer content showing us what’s going to happen. I don’t mind that too much as it will make the season a bit of a surprise but it did lead in this feeling that this season kind of crept up on me. While I’m sad knowing that this will be the last time we see Tatiana Maslany crush it in the seemingly endless supply of characters she plays, I am happy to see this story get some closure. Like I said in a previous Week In Geek, I fully expect there to be some consequences and not all of these characters to make it out alive. There has to be stakes in this final season, no matter how heart breaking. On top of that be sure to tune in to Fan Fest News as I will continue covering the show reviews. 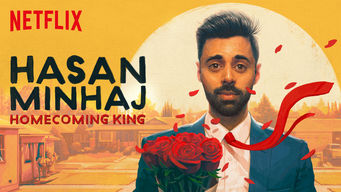 3. Hasan Minhaj “Homecoming King”– On Saturday the adorable creature and I watched one of Netflix’s newest comedy specials, Homecoming King by Hasan Minhaj after a night of dining on some kick ass ramen. I really didn’t know what to expect as I don’t know much of his material. I do know that he’s from the Daily Show but I still wasn’t overly familiar with his stuff.  After the first of what will be many viewings, I can say that this comedy special might be one of the best things I’ve watched all year. Yes, it’s that good. The jokes are funny and sharp but the story telling here is on a whole different level. You don’t just get a comedy special with this one. You get a story of one man’s life as he searches for identity, deals with race, rejection, family, and love. Homecoming King is masterfully directed and brilliantly performed. Come in looking to laugh but keep your heart open for the feels. They come quick and hit hard. It’s just a beautiful, creative fueling experience. I can’t recommend this enough.

4. New Mist trailer- It seems fairly recently I was here talking about the newest Mist trailer and here we are today with another new Mist trailer. Each one of these has gotten me more and more excited about the show, and while it appears it’s not going to be a clear adaptation, I’m totally okay with that. We have the movie for that. I’m anxious to see what events where happening outside of that supermarket. Plus this show looks like it’s not going to skim on the gore. I want Project Arrow answers!

2 thoughts on “Week In Geek- New Pops, Return of Orphan Black, and the Homecoming King”