Geeklings, I had two column ideas for tonight. I was actually thinking about doing both today because I was feeling super ambitious but things have changed. I’m now planning to write one of those columns tomorrow and focusing on the one you’re currently reading. Not because I’m not feeling super ambitious anymore but because I can’t focus. There are greater forces at work Geeklings.

Marvel and Funko chose today to casually release the images to the first wave of Infinity War pops today. Kind of like, “oh by the way we’re making pops to that mega superhero movie coming out in May. Here take a peek.” Now, I’ve seen a couple of leaked images, like Thor and his new hammer, but had been waiting for the official release, and boy did that not disappoint. I was on a break when they splashed across my Facebook feed so luckily I was able geek out and giggle in the privacy of my own lunch hour. Confessional time, when I get really excited about something I giggle. I’m overcome by this overwhelming feeling of joy that starts somewhere in my stomach and soon manifests itself in the form of a childish giggle. Happens all the time. Whether it’s with Star Wars or Infinity War trailers or buying a pop I was excited about… the giggle is real. I also sort of clap my hands in a weird quirky manner. It’s like this clapping/rubbing together type moment that I can’t describe. I just feel in that moment of sheer joy that I need to do something with my hands.

I am saying a lot. 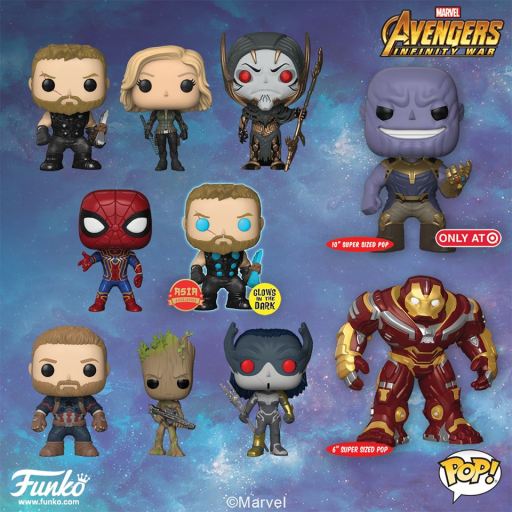 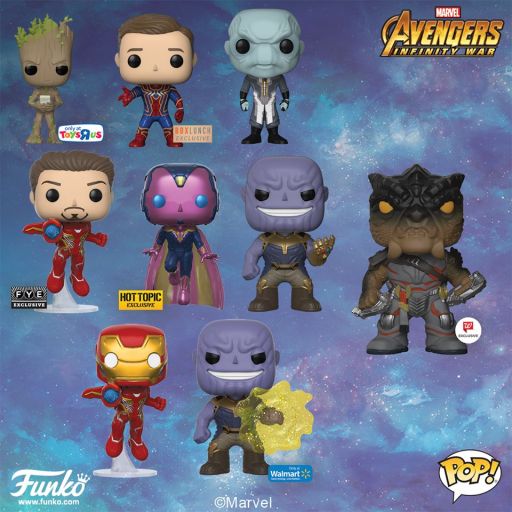 Honestly, I look at these images and I can count five pops that I most definitely need in my collection. Walmart Thanos, Cap, Toys R Us Groot, that Hulk Buster, and probably regular Groot. Like stat. Which begs the question, when are these going on sale?

The answer, sooner than I or my wallet anticipated. Think Geek put out a trailer saying that this Saturday (March 3rd) they would be releasing the Infinity War swag early. That’s right, three short days away. But apparently, three days was too long of a wait for some as it turns out the closest Think Geek to me (which isn’t really that close) put the figures out today. Like, twenty minutes ago today.

My friend Ken, who is an excellent cosplayer that you can follow @fe_cosplay on Instagram, sent me a text that he was heading to the store right about now to see what was going on.  We chatted, he ventured to the mall, and now I have three Infinity War pops waiting to be picked up on Saturday. Granted, none of them will be exclusives, still need an actual release date on these things, but not a bad start. Not a bad start at all. And this is only phase one… I’m dead.