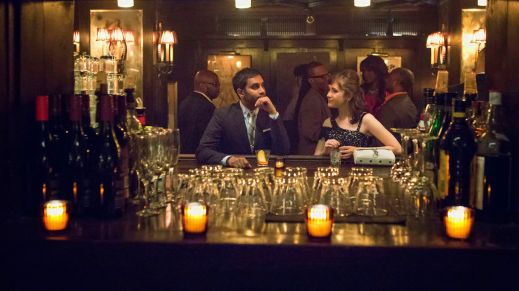 Last week I finished Master of None around Tuesday or Wednesday…I think it was Wednesday, maybe. That’s besides the point. I tried my best to savor the show, but I couldn’t keep myself away. I needed more. I needed to take this journey full circle. This lead to me binge watching the last three episodes with a glass of red wine (I’m just getting into red wine and name dropped it here to sound fancy), and a giddy heart. Then… it ended. About an hour and half later the show was done. I was finishing my second (third?) glass of wine and was staring at my screen. Thinking. Digesting. Soaking it in.

My immediate thought was I needed to say something about this show! Like a small appetizer before I write a post about it, and like most social media addicted people I turned to FaceySpace and Instagram. Same picture. Same comment. Although I only hashtag on Instagram and I maaaaaaay have tagged Aziz and Noel Wells. What?! I hold this small delusion that if I tag famous people in my pictures (especially if these pictures are of said famous people) that they might comment. Something like “Hey glad you dug the show!” or “Wow. Your critique was so genuinely worded and special to me. I’m on my way to you now so we can run away together”. Clearly that last comment was from Noel Wells, but if I’m speaking truths here… I’d probably run away with Aziz too. #noshame

After my little teaser on social media I thought I was really going to get the ball rolling for the post here at I Am Geek, yet the next day came around and I still wasn’t ready to talk about the show. That doesn’t mean I wasn’t thinking about it. The fact of the matter was pretty much all I was doing was thinking about the show (sorry work). Everything about it was weighing on me. All the feels, heart break, laughter, and situations were spinning around my head like some kind of merry-go-round. I decided to let these images and ideas dance around my head awhile longer, not to jump into a post, and allow myself some time to digest what I had just watched. That brings us to here.

For me, I found Master of None to to speak to me on a different level than most television shows, and I think that’s because I was the core demographic. Not me specifically, despite how it might feel that way at times, but my age group. The adult hopefuls in their thirties. Listen I love Breaking Bad and discussing it. But can I truly relate with a middle aged chemistry teacher with cancer who wants to cook meth? Not yet. Not enough life experience.  Let’s not fool ourselves, the sexiest age to write about is people in their twenties. That’s when we do our most crazy shit as well as learn most of our biggest lessons. Now what happens when we take those lessons, and try and spring board them into being an adult? You never really see that show and how that transition is, spoiler alert, kind of difficult at times. Master of None came out from the start to tell us thirty somethings that, “hey, we haven’t forgotten about you. We know the struggle is real. Come chill with us.” And that’s exactly what I did.

When making a show that you want people to relate to, subject matter becomes a very important part of the story you’re telling. What made Master of None work so well was that it told the story it wanted to while immersing it in subjects that most people in their thirties have to deal with. Topics like having friends with kids and how their lives and your friendship changes because of it, your relationship with parents and grandparents, when is it acceptable to sleep with a married person, work struggles, racism, being true to yourself, the different life experiences of men and women, and dating… oh god dating. Episode three, Hot Ticket, is probably one of the truest depictions of dating I’ve seen on a television show. The thought that I am more than just a few dots on your phone screen, I’m actually a person, hit close to home as did a really bad date experience. Trust me folks, the bad Cartmen impression paled in comparison to my date with the girl with the snickers story. I’ll say I think she was satisfied, but also in jail.

Everything I listed there is something that I’ve experienced in some form or another. For me I find it hard to be the single guy in a group of friends where everyone is more or less married or has kids. I love my friends to death but I think some of them are so far removed from the struggles of being single, and how much it changes once you reach your thirties. Suddenly meeting the “one” seems less likely in da club. With Master of None I found a group of people who were all experiencing that. They knew the struggle and took ten episodes to talk to me about it.

Which brings me to my next point. The reason why the show is able to work so well is because the relationships presented came across as real and genuine. The witty banter actually seemed like an inner language between a group of friends, and on top of that they all seemed to like each other. I especially enjoyed the episodes where a couple of them would separate from the group and you can see how the friendships worked on a more basic level. This helped tighten that group bond.

And then we come to Rachel and the romantic relationship. After her re-introduction in Hot Ticket (I felt that there wasn’t enough to really get to know her in episode one) I fell in love with this relationship. The way that both Aziz and Noel Wells were able to play off each other was fantastic, endearing, and showed two people who were building something together and learning more about each other. Mornings might could be a blueprint to what it’s like to move in with a significant other, and while it’s a bottle episode, it’s brilliant, engaging, funny, and a little tense. Thoughts of how weddings can scare the shit out of you, and how time is present in a way where getting older means you can’t waste time with another person like you could in your twenties. That idea kind of hit close to home for me, but I think that’s the purpose here. It’s supposed to hit close to home.

What makes great comedy great is it’s ability to touch on something that you can relate to. Yes for a minute Dane Cook’s observational comedy was all the rage, but I think in the end it’s comedy that has true roots in emotion that has the stay power. Everyone will laugh at the car alarm song, but after a few years does that joke stay with you? Or is it the joke about the couple trying to find a balance living together that sticks with you more? For me I believe it’s the latter. Jokes about actual life experiences help to both enhance those experiences and make them easier to relate to. Picture a wall breaking down and finding out that there are hundreds of people on the other side. That’s kind of how I felt watching Master of None. That there was a voice out there who was willing to put himself on the line so he could speak to us thirty somethings and say, “you’re not alone. We all go through this same shit too.” That’s the beauty of great story telling.

Netflix has not renewed Master of None for a second season yet, and while I really want to know what happens next, I’d be okay with the these ten episodes being what they are. Of course we all want clear cut endings and everything to be wrapped up in a nice little bow. That’s how we escape from the crap around us. Master of None gave us the real life ending (I mean to a degree this is still a work of fiction). That’s what I think I was digesting the most. The realness of this show. It’s life. And life keeps on moving.

5 thoughts on “The Master of Relating”